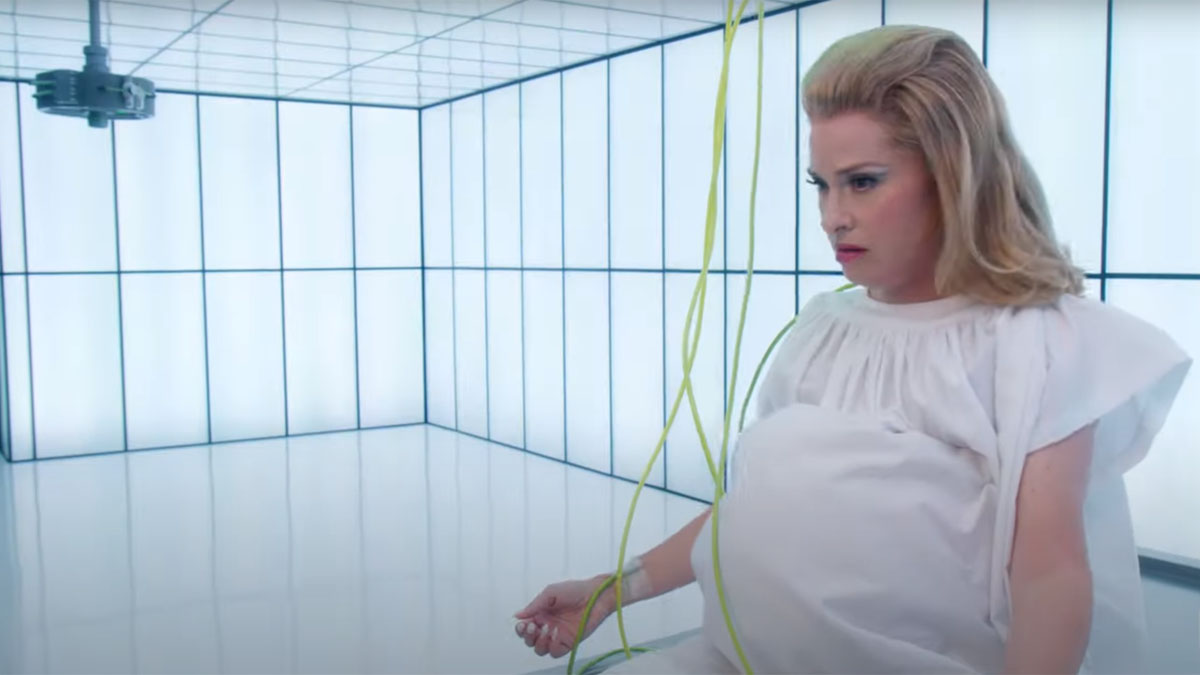 With every passing year, the human-alien hybrid efforts being undertaken by the mysterious aliens from the 1950s seem to be getting closer to something familiar. We’ve seen the early efforts; the face-hugger monster from Amelia Earhart was horrifying, but they’re getting closer, if only from the fact that half of Angelica Ross’ Theta looks halfway human (and halfway alien). However, they’ve got hundreds of failed experiments suspended in glass jars like exhibits at a circus sideshow, and they all had to come from somewhere.

Unlike the more cohesive Red Tide, the Death Valley segment of American Horror Story has been divided into things from the past and things from the present. As such, there’s been a difference in quality between the two sections, with most of the focus, thus far, being on the conspiracy theories of the 1950s and not as much on the trapped kids being held hostage by the Grays. For the most part, barring a few hiccups, that’s been the most effective part of Death Valley‘s split. I don’t necessarily need the kids from today, because I’m much more interested in how the aliens set up roots in the United States than I am the troubles befalling pregnant men and kidnapped showgirls.

Then, Troy (Isaac Cole Powell) began to give birth. Then, Calico (Leslie Grossman) started to tell her story. By the time she took the group onto the moon landing set, I found myself sucked into the events, despite myself.

Full credit to the writers of “Blue Moon,” Kristen Reidel, Manny Coto, and Reilly Smith leave no conspiratorial stone unturned. The disappearances start immediately, and dramatically. Nixon starts preparing himself to run for President a second time. By the time LBJ (Karl Makinen, I believe) is introduced to Valiant Thor (Cody Fern) and let in on the big conspiracy, Marilyn Monroe and John Kennedy have been put down, because they knew too much and couldn’t keep a proper secret, America is poised for a technological boom, and a proper cover story for the big leaps in technology is being prepared.

That story, of course, is the moon landing, which as we all know was famously faked in a sound stage at Area 51 by Stanley Kubrick. Except, in the world of Death Valley, that’s exactly how it happened, and that pristine sound stage (presumably used to fake other moon landings since then, and kept ready to fake Elon Musk’s first successful moon landing) is one of Calico’s favorite spots when she needs to get away from the world of forced impregnation, blinding white lights, and weird gelatin cube dinners. As it turns out, humans could have landed on the moon, it’s just not worth the effort to do so because there’s no scientific benefit that won’t come from the inside of Valiant Thor’s metal briefcase. Unfortunately, those gifts come at a high cost, but as Thor points out, it’s either cooperate voluntarily or have what the aliens want taken by force, an arrangement that seemingly only Richard Nixon is okay with as long as he gets to be the POTUS one day (and Sarah Paulson‘s Mamie Eisenhower is okay with so long as she’s more popular than Eleanor Roosevelt).

The black-and-white segments of the episode, as driven by personal greed as they are, also contain some of the show’s best-looking horror elements. Just the footage of Eisenhower walking through the desolate subterranean maze under the White House trying to track down screams is enough to cause chills, and there’s a beautiful shot of three horrified Presidents starting into the observation room as they behold a whole collection of failed genetic hybrids, driven home by solid acting from both Eisenhower and LBJ. The modern stuff isn’t as evocative of the 50s sci-fi aesthetic, though that’s no fault of directors Laura Belsey and John J. Gray. The modern age just doesn’t pop off the screen quite like familiar, comfortable throw-back imagery of long shadows stretching down cinder block hallways, and horrified men in suits looking at alien fetuses.

Though, I will say that the birth scene, and the second birth scene at the end of the episode, are appropriately horrifying and touching in turns. Anyone who has ever been in the room for a baby being delivered will know Troy’s shock and terror at being numbed for delivery, and while there’s no natural way for the baby to come out, the sound that comes from his Cesarean section is appropriately squishy and unsettling. The way the baby hybrid is, for lack of a better phrase, disposed of, is also shocking and horrifying. Sure, it’s an awful monster, but it’s also a baby, and Isaac Cole Powell sells his heartbroken response better than he has any right to considering it’s an awkward-looking puppet.

Death Valley, as a whole, doesn’t quite pull together as neatly as Red Tide. That said, this episode, which ties together multiple alien baby sequences, is beginning to tighten the stitches on the slashed-open abdomen that birthed it. Unlike the alien sequences in Asylum, at least this time the story is getting more attention, rather than being tossed in as a strange after-thought. It’s still not great, but at least it’s fun if you’re into weird alien conspiracies like I am.

How Back 4 Blood Modernizes Left 4 Dead for a New Generation
The Velvet Underground and Frank Zappa Was the Original East Coast/West Coast Musical Feud
Halloween Movies Ranked from Worst to Best
Doctor Who: Why Everybody’s Saying Lydia West is the New Doctor
Halloween Kills Ending Explained