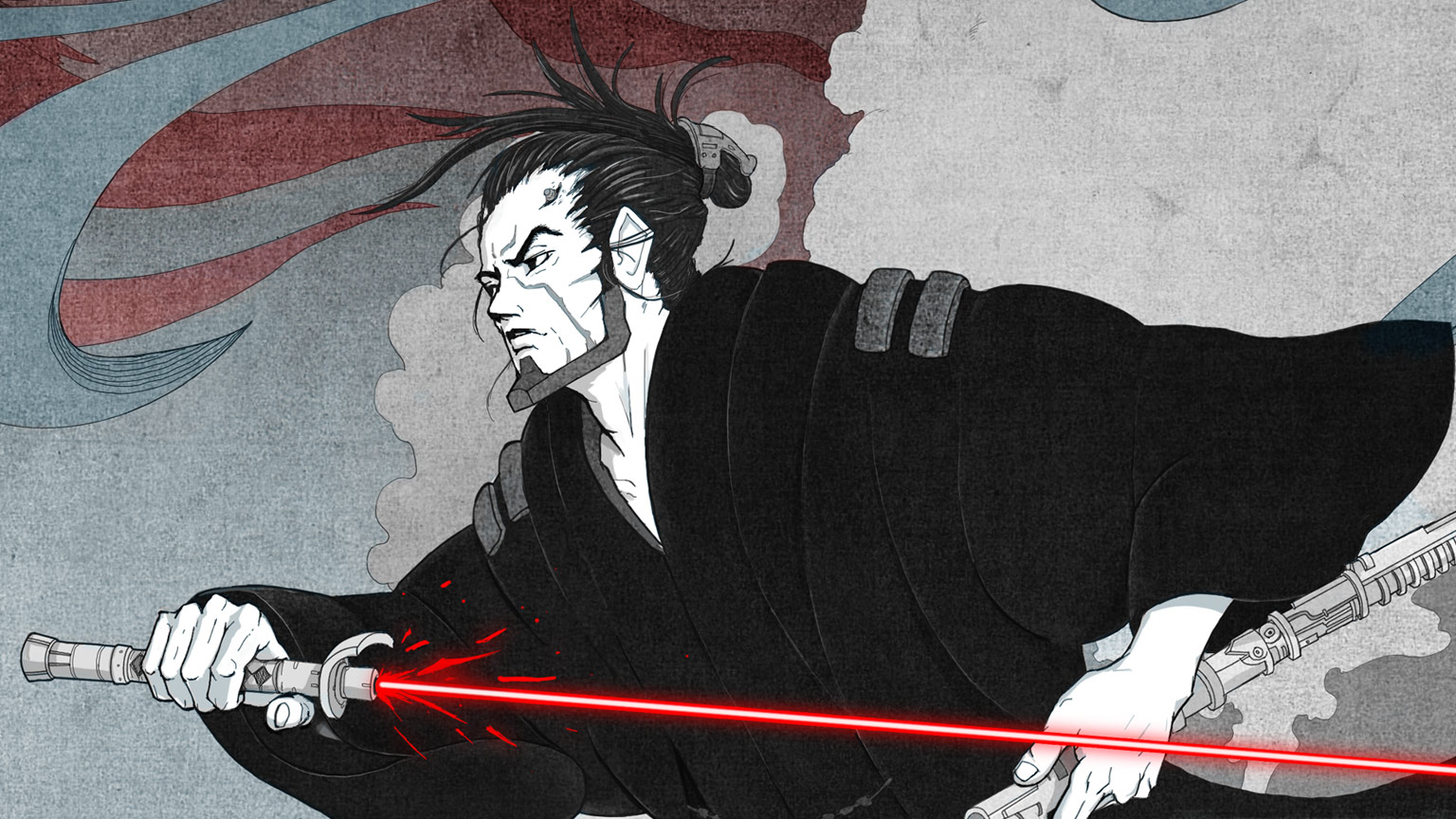 Emma Mieko Candon, author of Star Wars: Ronin, is pulling from Star Wars the way George Lucas drew from Akira Kurosawa films. Her novel redefines pop culture vocabulary like “Jedi” and “Sith” in order to bring them back to the ideas that inspired them: Force-users as samurai, and all that implies.

In the novel, it’s the Jedi who are affiliated with Imperial lords and the Sith who have rebelled against them. Forget lore about Darth Bane or the Old Republic — or rather, set Ronin aside as its own alternate universe. Without anything so literal as Marvel’s multiverse, Ronin opens up a new well of creativity in terms of how Star Wars stories can be told.

Speaking to Den of Geek, Candon says the novel is heavily influenced by Japanese art, culture, and folklore.

“Jidaigeki [Japanese period pieces] were a huge part of what I was thinking of when I was looking at what the anatomy of the drama would be like,” Candon explains. “What do jidaigeki think about samurai? What do they feel about ronin [samurai who don’t serve a master or lord]? And also coming back to what about Kurosawa films George Lucas was like ‘I see the lone swordsman, I’m going to interpret him as this.’ Or the lone swordsman with a code of honor. So bringing the George Lucas interpretation a little closer to the original Japanese sensibility is a lot of what I was doing.”

Some of that comes down to changing the story’s relationship to the idea of “empire.” Since the days of A New Hope, the Empire has been the unquestionably evil opposing force with little political specificity that the underdogs must fight against.

“But that doesn’t quite code the same way in Japanese storytelling,” Candon says. “Often you’ll see the hero trying to overcome the corrupt government, but also a lot of the time ‘no, we’re the empire!’ And there are varying feelings about that. Sometimes it’s ‘we’re the empire and we suck!’ Sometimes it’s ‘we’re the empire and we just live in it, we’re just here, it’s what we are.’ It felt a little more honest to the source to [show] the Jedi and the Empire are in alignment because the samurai are in alignment with the emperor and the shogun. Because that’s where their loyalty lies. That’s why they exist.”

By taking the idea of Jedi as samurai back to its roots, Candon found an angle on it different from what has been portrayed in Star Wars lore before.

“One of the things I think is really interesting about jidaigeki that didn’t really make it over in how they influenced Jedi in Star Wars is that jidaigeki are actually rather skeptical of samurai,” she says. “They don’t really like them all the time. Their favorite samurai is one who is torn between his internal code, his sense of honor, and his realization that his sense of honor is being used to make him hurt people. So he’s like ‘wait, this is good, but also on the other hand I am being told to do some really shitty things.’ That’s the classic samurai.

“That’s really what I was digging into. It was also a huge part of how I shaped the Jedi and Sith in Ronin. Because in Star Wars the Jedi are noble, [but] for their failings you can dig into the Prequels [and] their stagnation. That’s writ large in Kurosawa and other period pieces. The samurai have problems!”

Real-world events played a part in shaping the storytelling of the novel as well, especially when it came to examining the politics of novel’s empire.

“This is especially important for me to lean into a bit these days where all around the world different places are suffering from various kinds of nationalistic movements, and the same is very much true in Japan, and the far right over there really loves to idolize the samurai. I can’t get behind this right now. It doesn’t feel good! That was a huge part of what I was thinking of when I figured out what the dynamics of this new iteration of the world would look like.”

The character in which this tension plays out is the nameless Ronin also seen in “The Duel,” the first episode of the animated Star Wars: Visions. In the episode, Ronin is depicted as a wanderer with a mysterious past. When he’s drawn into a conflict with other Sith while visiting a small village, he must decide whether to help those in need or do nothing. While he turns out to be the hero of the piece, the color of his lightsaber suggests that hasn’t always been the case.

The Jedi were even more closely tied to the book’s version of the Empire in her initial pitch. But, Candon says, the Lucasfilm story group “wanted to stay a little more true to the Star Wars roots of there’s a history where the Jedi aren’t necessarily tied to the Empire in their origin.”

Drawing from classic elements of Japanese folklore was also essential to the formation of the novel. As seen in this lengthy excerpt, not everyone who dies in the novel stays dead. And some of Candon’s early concepts for the book focused around questions inspired by folklore archetypes. “What if Benkei but an oni?” she asked during very early planning. “Benkei is this legendary warrior-monk who’s like ‘Samurai suck! I’m going to beat them up and take their swords.’ So he does that, he goes around the world and his goal is to do it a thousand times and he does it 999 times,” Candon explains. “He finds one guy and is like ‘You’re good, I’m going to follow you, I’m going to be your retainer for the rest of my life.’ There’s this space in Japanese history where it is a cross between legend and history, and that’s where Benkei lives.”

In Ronin, the title character himself plays the Benkei-like role. First teased in his Visions episode after he defeats his enemy, we learn that Ronin’s on a quest to kill Sith and take their kyber crystals, which he carries like trophies. Why he’s doing this become clear later in the story.

A kitsune Jedi — envisioned in the novel as the character known as the Traveler — was another idea she wanted to include “That basically makes no sense, but I have to make it work.” In Japanese folklore, the kitsune is a fox spirit known for the ability to shapeshift. The Traveler, a mysterious former Jedi, doesn’t literally shapeshift. But their obscured past, who and what they really are, and their use of a mask throughout the novel convey the essence of the creature.

One character she didn’t get the chance to include was yamauba, the “mountain hag” who eats travelers and their wagons alike. “I love yamauba and didn’t find room for her,” Candon says.

Candon also drew from kishōtenketsu, the classic four-act structure used in Japanese narratives, distinct from the three-act structure seen in most Hollywood films. “Kishōtenketsu involves slow escalation and a twist at the end,” Candon explains. “Inadvertently, that did fit rather well with what I structured. Partly because I’ve just found in my own internal brain I think in four beats.”

The novel does indeed have a measured escalation throughout — and a late-game twist — but we’ll leave that for you to discover.

If you loved Visions and want to learn more about Ronin and his world, Candon has crafted a uniquely Japanese-influenced book that interrogates what the idea of Jedi being inspired by samurai really means, all while finding new and interesting things to say about them. It’s the kind of deep exploration of what Star Wars is and where it came from that the saga needs more of.

Star Wars: Ronin is out now.