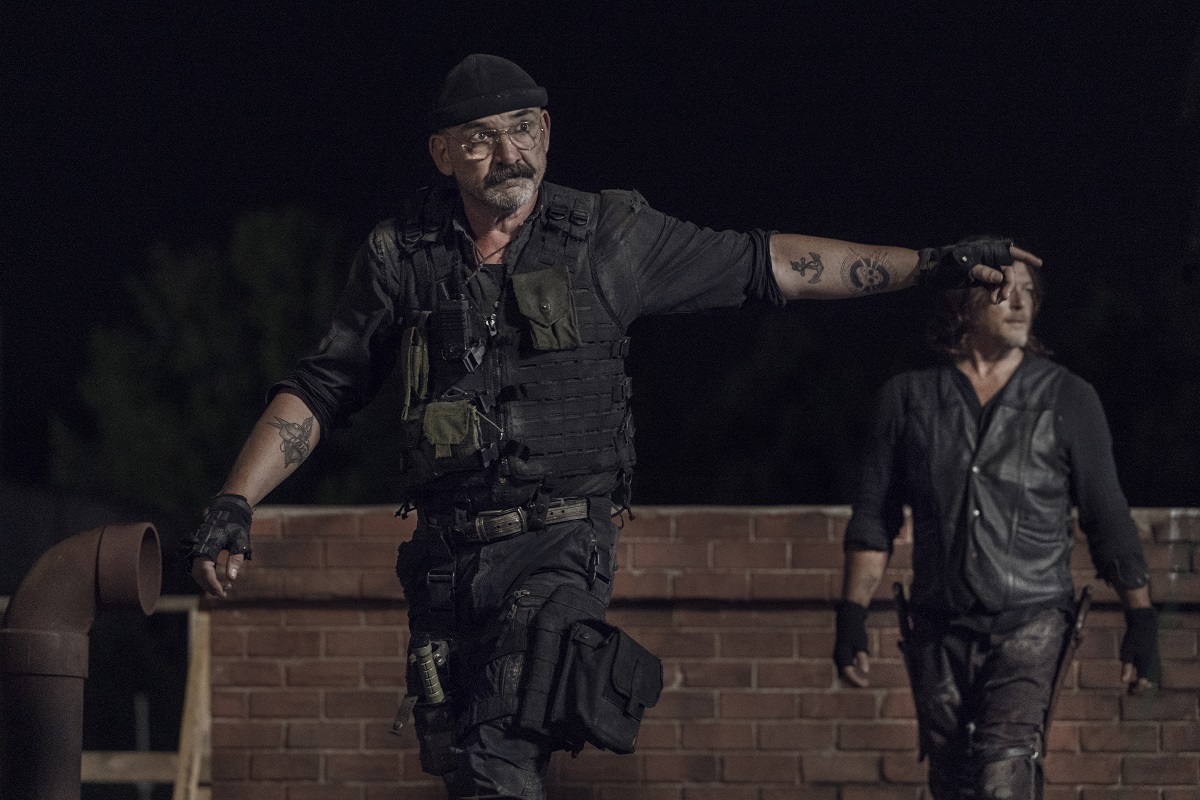 One of the things The Walking Dead does better than most shows, especially shows that lean action/adventure or horror, is scale. There’s no shortage of zombie extras on The Walking Dead, and the show never hesitates to push for larger groups and bigger action sequences so long as the budget holds up. There’s no denying that, even with CGI sweetening, “For Blood” has a lot of zombie moving parts, and a lot of relatively complicated action sequences involving multiple parties fighting side by side, against one another, against the dead, or some combination of all three.

A lot of that has to be due to experience. By the time of any series’ eleventh season, the cast, crew, and extras should be used to working together, even with the inevitable comings and goings of new faces. There’s a lot to be said for continuity, and there’s a lot to be said for having people who know the deal, know how to hit their marks, and know not to walk into the path of exploding flash pots and black powder bombs. When you know what you’re doing, it’s easier to do more complex tasks.

And, when you know what you’re doing, it’s a lot easier to use your best tricks against your unwitting enemy.

One of the smartest things in “For Blood” is the fact that, when faced with a new opponent, Negan and Maggie are smart enough to use a trick Negan picked up from his time with the Whisperers as a weapon. It worked against them, right? Why wouldn’t it work to allow a very small group of people to get into Meridian? Why wouldn’t it be used as an effective force multiplier like how the Governor used it at the Prison, or Carol used it at Terminus, or Alpha during her many attacks on Alexandria? Certainly, it’s a phenomenon that everyone knows about; herds have been a thing in the past and will be a thing going forward, but rarely does someone use the herd as cover for a full-fledged assault mission. At least, it’s new to the Reapers, and Daryl isn’t going to spill the beans.

It’s difficult to come up with new ideas in a show that’s been on eleven seasons. We’ve seen all sorts of tricks, but we have yet to see medieval Korean weaponry come into play. Between the hwacha that the Reapers deploy as their ultimate zombie-killing weapon (even more so than land mines and also useful if you have to fight 16th century Japanese invaders), Rosita’s macuahuitl, and a few kukris, the prop department has done a wonderful job of digging into the history of weapons to find new armaments to use on zombies. Old fashioned, yes, but no less terrifying when Pope orders it aimed into the courtyard to kill everyone within its range with fireworks-powered arrows, be they walkers, Maggie’s assault team, or his fellow Reapers.

It’s desperation, driven by intense paranoia. Since his introduction, Pope’s blend of personal charisma and religious fervor has kept Daryl, the outsider, on edge. His own Reapers were willing to turn a blind eye to it, as it seems to have developed gradually over time, but Daryl and the audience are able to see past personal loyalty and see the dangerous person Pope is, made all the more so by Ritchie Coster’s sweaty, physical performance. He’s outwardly confident, but the panic is clear on his features as the growing mob of zombies outside his gates get closer, because he’s certain that somehow Maggie is behind this. She is, but that’s no excuse for turning weapons on your own people and committing the ultimate betrayal in the eyes of Leah.

Eric Mountain’s script puts the point home repeatedly; family first, over everything else. If you’re willing to let your family die for nothing, and willing to sacrifice members of your family like pawns in a game against your own obsession, then you’re too far gone to be saved. But if you cross family, then you’re an enemy, even if you’re the love of someone’s life. Leah might not be able to forgive Daryl for what he’s done, but she at least gives him the same opportunity the stranger gathering food for his sick wife had. Daryl gets to run.

There just might not be anywhere to run to if Rosita, Carol, Aaron, and the rest of the people in Alexandria can’t repair the walls, stop the fire in the windmill, and fight off the walkers that have broken through the defenses during a gale-force thunderstorm. Daryl’s situation and the situation in Alexandria are well-crafted mirrors of one another. Daryl tries multiple things to get away from The Reapers and warn his friends, and all of them fail. The Alexandria crew undertake multiple missions to preserve their town, but nothing seems to go right for them either. There’s another breach of the walls, walkers swarm the safe house, and the survivors are forced to abandon the bottom floor of the house to the dead. (As if that wasn’t enough, the basement where Gracie and Judith hide is also flooding.)

Director Sharat Raju does a great job of amplifying the tension and anxiety present in Mountain’s script. The trapped survivors in Alexandria echo the original trapped survivors in Night of the Living Dead. Pope’s instability grows with every interaction with Norman Reedus’s Daryl (who has some solid character moments this week) and Lynn Collins’s Leah (likewise). Reedus and Collins really play well off one another, without it being too obvious how things will play out for either character, or for the rest of the Reapers.

Both stories work well, and there’s no real break in the tension between the two. Both only turn the tension up leading to the season-pausing cliffhanger. Certainly, there’s a climax for Daryl, but no resolution. The hook is set; it’s only going to take time before the fish is reeled in.