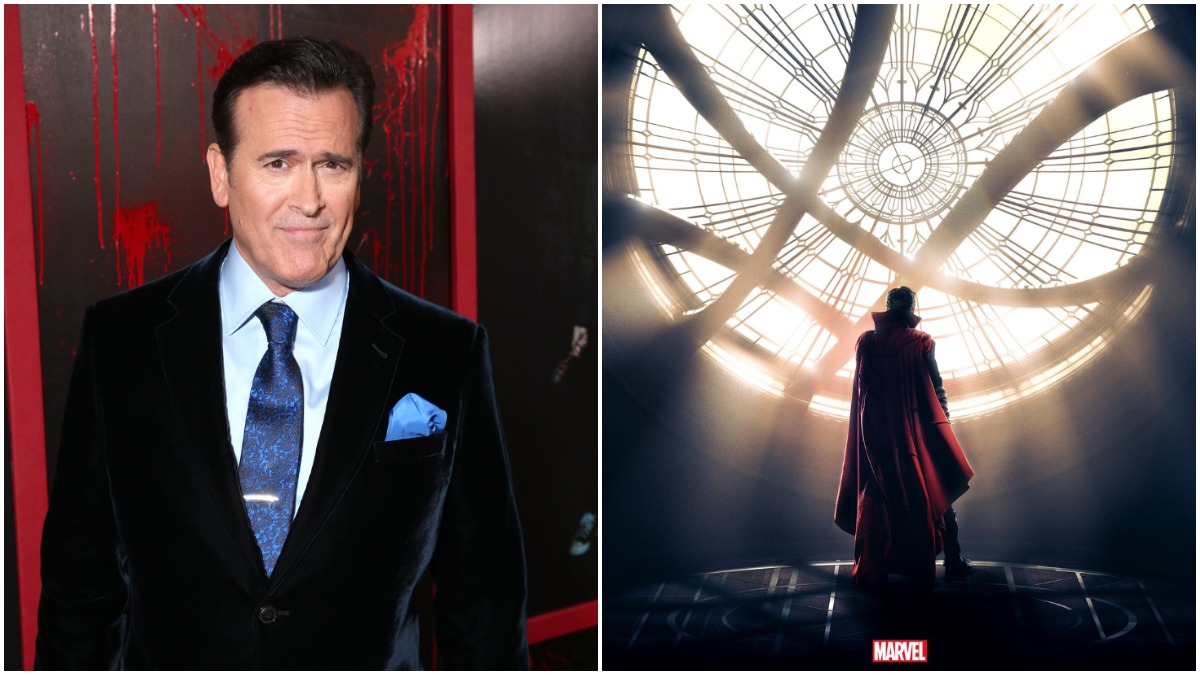 Bruce Campbell has partnered with filmmaker Sam Raimi for years. At the beginning of their careers, they worked together on The Evil Dead straight out of college. Much later in Raimi’s blockbuster entertainments, be it the Spider-Man trilogy or Oz the Great and Powerful, Campbell still cameoed. Which makes it strange when the actor grows tightlipped at the mention of Doctor Strange in the Multiverse of Madness.

That Benedict Cumberbatch superhero movie is being directed by Sam Raimi, marking the filmmaker’s first superhero picture since Spider-Man 3 and his first collaboration with Marvel Studios, period. So the movie invariably came up during our conversation with Campbell about The Evil Dead and it’s 40th anniversary. But when we ask the actor whether he’d be interested in doing cameos in superhero movies again now that Raimi’s back in the game, Campbell pauses for a half-second before saying, “We’ll have to wait and see, won’t we?”

It’s a bit of a cryptic response but one that’s par for the course with Campbell, whose answers run the gamut from playful to hilariously deadpan. It’s for that reason we also ask Campbell if he could hypothetically offer any advice to Doctor Strange actor Benedict Cumberbatch about working with Sam, what would it be?

“When he starts to insult you and abuse you, that means he really likes you,” Campbell offers with a laugh. “Because I remember Tobey Maguire at one point, I think it was during Spider-Man 2, when he realized I was just going to keep coming back and he couldn’t get rid of me, he mentioned something about how the other day Sam threatened him with a prop. He held it up and threatened him. I was like, ‘Tobey, that’s great! That means Sam’s starting to like you. That’s good news!’ He gave me the weirdest look, like, ‘What?’ And I’m like, ‘Yeah. That’s how he shows his affection: by insulting you.’”

Campbell would know. As he recalled to us, the leading man was one of many to suffer injuries on their accident-prone production on The Evil Dead. But upon discovering their star had possibly broken his ankle during the shoot, Raimi and producer Rob Tapert apparently cornered Campbell in a room and began poking the ankle with a stick.

“I’ll always favor that ankle lovingly, because I know it came from Sam,” Campbell says.

Yet that distinct relationship between director and star has always been amusing to both Raimi and Campbell, particularly as Raimi’s prestige in Hollywood rose. Long before Spider-Man, Raimi first began working with full-fledged movie stars on The Quick and the Dead in 1995. Campbell also fondly recalls what he told Raimi on that production (in which his role as a “wedding shemp” was left on the cutting room floor).

“When he went to do Quick and the Dead, I literally said, ‘Sam, are you going to take a two-by-four and hit Gene Hackman in the ankles to get him motivated? You going to push Sharon Stone down a set of steps to get her ready for the shot? You going to tell Russell Crowe that he’s a pussy? What are you going to do? Leonardo DiCaprio, how are you going to motivate him?’ So I just thought it was very funny when Sam moved on to direct really big actors. It was hilarious to me.”

Presumably that includes Raimi finally working with Marvel Studios’ stable in Doctor Strange 2… a movie Campbell may or may not have been on the set for. Apparently.

Doctor Strange in the Multiverse of Madness opens on March 25, 2022. The Evil Dead will play in theaters for its 40th anniversary for one night only on Oct. 7.