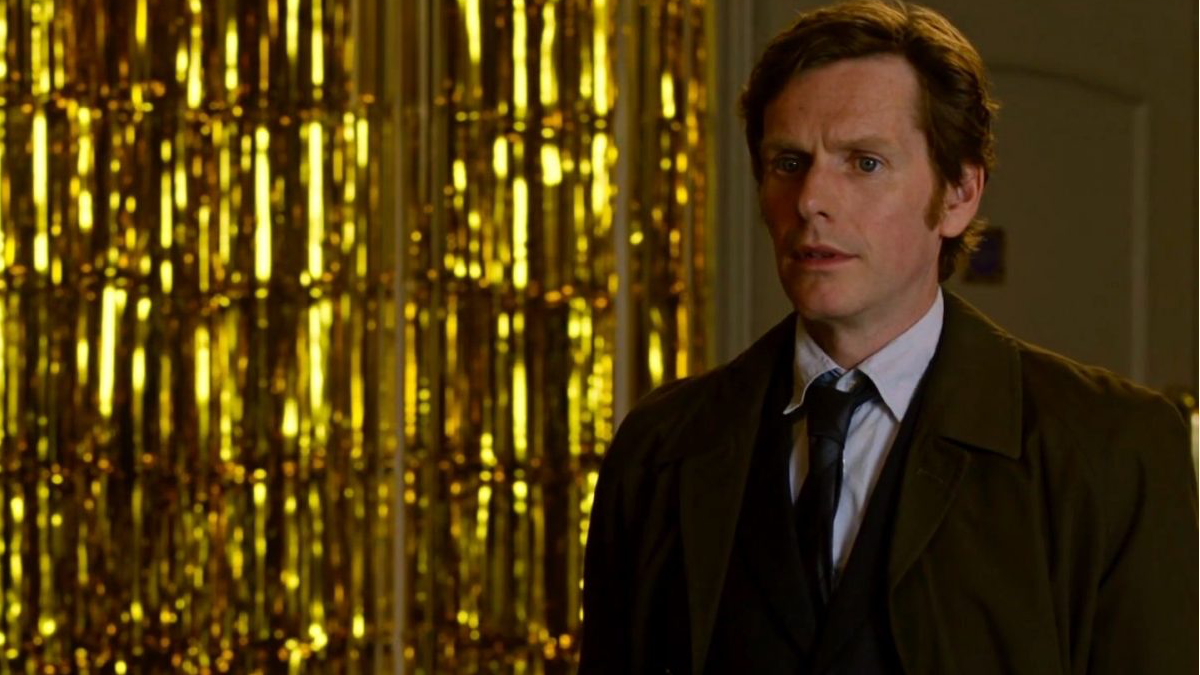 For those of us who don’t share Morse’s musical bent – and we’ll be due a snooty glare from our man Endeavour, as his wicked(ish) stepmother Gwen (Lynda Rooke) would no doubt be the first to warn us – a word on that episode title is needed. A scherzo’s a movement in a symphony or sonata distinguished by its light, playful tone. Bit of fun on writer Russell Lewis’s part, surely? Well, yes and no.

‘Light’ and ‘playful’ aren’t words we’d always associate with Endeavour, especially in the current series, with its bitter echoes of the grief and disillusionment left by a death in Venice. Yet ‘Scherzo’ begins fittingly enough for a comic opera, with scenes that are more reminiscent of HBO’s recent drama The White Lotus. Playful music (composer Matthew Slater nails this episode’s thematic, as well as visual, light and shade, in concert with director Ian Aryeh); acid colours more at home under a tropical sun than beneath dreaming spires; a hotel manager whose professional smile might mask private troubles. You won’t be surprised to hear that both shows feature a murder. Several, in this case. You will, however, probably raise an eyebrow on learning that this week’s Endeavour, like The White Lotus, involves quite a bit of nudity.

It’s Strange, inevitably, who’s confronted with sights a little more…let’s say, natural, than he’s used to when he arrives at a nudist hotel to interview its guests about the murder of a taxi driver. The dead man, shot through the head by someone in the back seat of his cab, is found in the abandoned vehicle down a country lane nearby. DeBryn is, for once, holding rather a late post mortem; he has an altogether more pleasant dissection to enjoy first over lunch. (Don’t worry, it’s only The Eagle’s finest pie. Nice to hear somebody’s fun remains unspoilt, at any rate.)

Morse spies a finished crossword by the victim’s body and feels a brief tug of kinship. Not for long, mind you. An ex-wife and alienated little boy, a new missus who’s the last in a long line of extra-marital conquests, and colleagues who remember his gambling streak: this bloke really isn’t Morse’s cup of tea. It’s the first in a succession of mysterious deaths that will lead to a seamier side of Oxford life, far removed from the Carry On frolics of the naturists’ haven cheerily run by Major Jones (Andrew Woodall). As ever, Morse and his colleagues will have to get to the bottom of a rapidly thickening plot. Lots of people end up being interrogated in this episode about secrets they’d rather not share. My favourite was Lee Timothy (Shadrach Agozino), one window cleaner who won’t be confessing to anything, thanks very much.

This eighth series is plagued by unwanted ghosts, yet the vision that alights on Morse’s doorstep is brought there not by a phantom coach but by a taxi from the dead man’s own firm. It’s Gwen, Morse’s much unloved stepmother. Caught between moves, she has nowhere else to go, and she and her embittered stepson are just going to have to muddle through their odd-couple arrangement for a few days. Endeavour retreats into teenage sulks and moody silences, while Gwen chides him for what she sees as his class-bound disloyalty to Morse père: himself a taxi driver, in case we’d forgotten.

It all comes out, of course – Morse’s lost mother, abandonment, blame. “I didn’t kill her,” Gwen blurts out in a climactic row. Morse looks at her in shock, as if this most perceptive of men has never quite twigged why he’s hated her until now. They’ll never be reconciled, of course, locked in their own grievances. The family alternately proud and terrified of an Oxford-bound son whose desire to distance himself stings more than they’d ever admit. The lonely kid turned withdrawn man who, somewhere, must long to be just one of the boys. You wonder, treacherously, whether he might have been better off with someone like Gwen: someone to puncture the bubble, the kind of woman who could shatter a wall of silence with the right word. But this is Morse, for whom love and suffering are synonyms.

Speaking of which, Joan and Strange are getting closer. (I saw it coming. No, I did.) Whether Joan will be able to set aside her sense of social justice to consort with a dutiful member of the Masonic Lodge remains to be seen. For now, there’s a Carpenters’ gig in London to attend, and an earful of abuse from Joan’s housemate awaiting Morse when he makes a late-night call to his one-time love’s home. As someone else would almost sing much later, who’s gonna drive him home tonight? The cabby who knocks him down while he’s shambling drunkenly down Oxford’s side roads, it turns out.

Bring on the Wagner, then. It’s that kind of an opera we’re watching, after all.

Endeavour series 8 concludes on Sunday the 26th of September at 8pm on ITV.