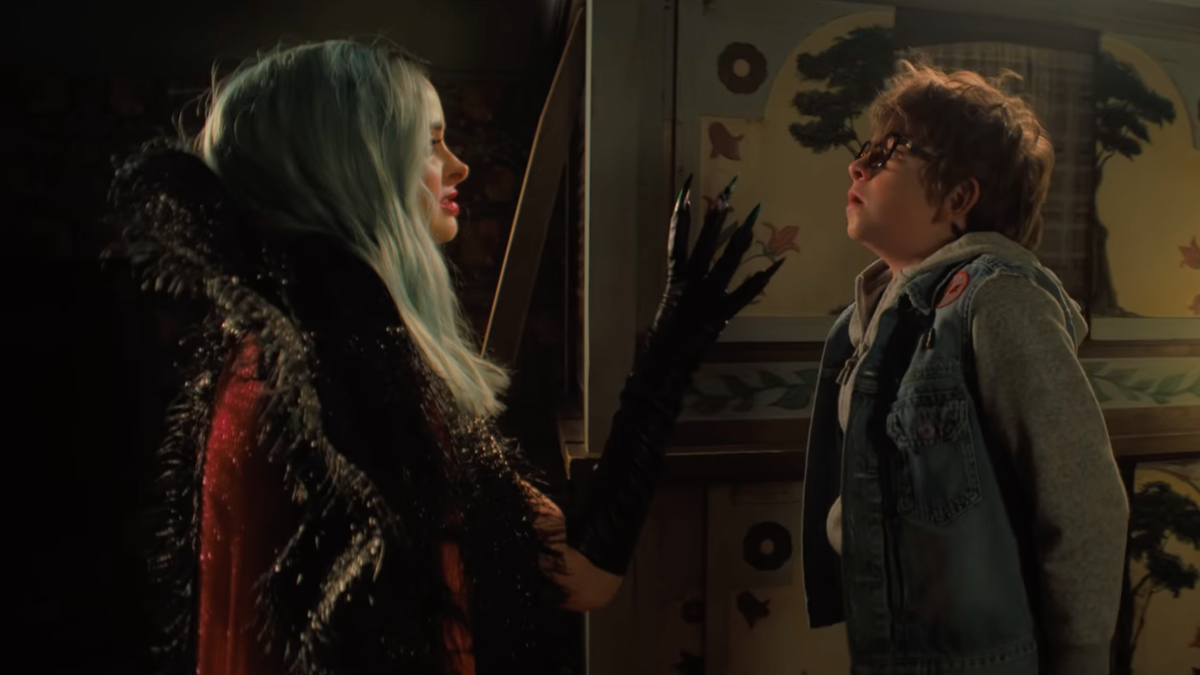 Plenty of scares await Alex (Winslow Fegley) and Yazmin (Lidya Jewtt) when they become trapped in the haunted apartment of the evil witch Natacha (Krysten Ritter) in the Netflix horror movie Nightbooks. he only way they can hope to stay alive is to prove their usefulness to their captor — Yazmin as a house worker and Alex as a storyteller who must write a new scary story for Natacha every single night. At first, we think Alex’s assignment is just for the witch’s amusement. She’s spooky as hell, so why wouldn’t she like a good horror story? But we soon learn her need for stories runs much deeper than her literary tastes.

What exactly happened in the chilling final act of Nightbooks, how does it all connect to a classic Grimm’s Fairy Tale, and will Natacha return from one last scare in the sequel? We have all of the answers…

Natacha and the Unicorn Girl

As we’ll learn later, it’s no accident that Alex first discovers the Unicorn Girl’s secret journal entries inside a very old copy of Grimm’s Fairy Tales. Written in pink ink that specifically adorns the grisly tale of “Hansel and Gretel,” the mysterious unicorn girl begins describing her plan to escape the evil witch’s lair once and for all. But it won’t be easy: she needs a series of specific ingredients from the witch’s nursery to concoct a special sleeping potion to knock out the old crone and steal her keys. Luckily, Yazmin is good at making potions and Alex has the perfect way to get Natacha to tell them the last ingredient needed for their potion.

Alex and Yazmin believe that their plan will work because it’s worked once before. They theorize that since the Unicorn Girl isn’t on the witch’s display case full of children turned into figurines their pen pal from the past must have escaped. But things are much more complicated than that.

After knocking out Natacha with the help of her cat Lenore, the trio make their escape, out the front door and into the dark woods beyond the apartment. But they soon discover that this isn’t the way out at all but a path to the truth. When they come upon a cottage made of mesmerizing candy and fall under its spell, they come face-to-face with the real witch, one much older and more powerful than Natacha. It’s in this moment, as the real witch threatens to escape her tomb once and for all, that Natacha reveals the truth about her past.

You see, she was once the Unicorn Girl from the journal entries. Once the real witch’s favorite child — the witch had no problem eating all of the rest of the children — Natacha secretly hatched her plan to escape by using the sleeping potion on her captor. And it worked! But when Natacha ran back home to her parents, she discovered that they had moved on without her, unknowingly abandoning the missing child who had fought so hard to return to them. Natacha was so angry that she returned to the witch’s lair and encased her in a machine so that she could harvest her powers and pass them off as her own (this is why Natacha sprays herself with the blue mist each night). Driven by anger and revenge, Natacha became the thing she hated.

The Real Witch and Hansel and Gretel

Can you really blame Natacha the Unicorn Girl for turning evil? Years trapped inside a cannibalistic witch’s evil candy cabin will do that to a kid. And if Natacha’s origin story sounds familiar to you, it’s because it goes all the way back to the fairy tale of “Hansel and Gretel” about the little siblings who are abandoned in the woods by a cruel stepmother and left to fend for themselves when the witch traps them in her candy cottage. Like in the story, Nightbooks‘ witch loves eating children, and isn’t tricked into a burning oven at the end of the oven.

It’s unclear whether this is truly supposed to be the same witch from “Hansel and Gretel” or if Natacha simply used her powers to create the fantasy world of the fairy tale, with the addition of a creepy unicorn. It would make sense for Natacha to be inspired to re-create “Hansel and Gretel” since it’s clearly a tale that had an impact on her as a child.

Nightbooks doesn’t completely ape the Brothers Grimm, though, adding other elements to the basic fairy tale framework, none of which are really explained in the movie. For example, why is the real witch so mesmerized by scary stories? Not only can they apparently put her to sleep — which makes you wonder why Natacha needed the potion in the first place — but she seems to really hunger for them, which is how Alex and Yazmin are eventually able to shove her into the furnace in the basement of the apartment building.

The machine that siphons her power in the form of blue mist also doesn’t make much sense, but we’ll chalk that up to magic. Not all things in Grimm’s Fairy Tales make sense either. A house made of candy?

Why Did Alex Want to Burn His Nightbooks?

Even after the Natacha twist and the real witch have been revealed, the movie’s biggest mystery remains unanswered: why did Alex want to burn his nightbooks in the first place? Natacha forces him to finally tell the tale he’s been trying to avoid, one that’s painfully real for the young horror fanatic who doesn’t fit in at school.

When Alex decides that he wants to have a birthday, complete with spooky haunted house decorations and new scary stories he’s written for his guests, he expects that at least his best friend from school will show up. But when his friend calls him weird and no one shows up at his party, Alex is so devastated that he decides to rip up his horror movie posters and burn all of his notebooks. But as Yazmin explains, that would be a tragedy since it would mean that Alex would be shedding the things that made him interesting in the first place. People who are ordinary will always try to bring Alex down to their level, says Yazmin, but he should never let them. Instead, embrace the things that make you unique. It’s a heartwarming message about identity and learning to be yourself that ultimately anchors this chilling tale.

Alex and Yazmin get a happy ending, but it might not last. Natacha returns for one last scare in the final shot of the movie. This leaves things just open-ended enough for a potential sequel, but Netflix has yet to officially announce that a sequel is in the works. That said, director David Yarovesky (Brightburn) is up for making a sequel.

“The author of the book baked into the book an allusion to more coming. Who knows?” Yarovesky told Decider. “Who knows what the future holds? But I think that there’s a lot more story in this universe, and I think that this story could be the start of so much more… I love this universe. I love the characters. If I was lucky enough to be able to make more of these, I would of course happily make more of them.”

So, as Alex and Yazmin learned in the movie, never lose hope.

Nightbooks is streaming on Netflix now.

The Batman May Be Even Darker Than the Trailer Suggests
Metroid Dread Could Break the Franchise Sales Curse With No Compromises
Halloween Kills Ending Explained
Doctor Who: Why Everybody’s Saying Lydia West is the New Doctor
Lamb Ending Explained with Noomi Rapace