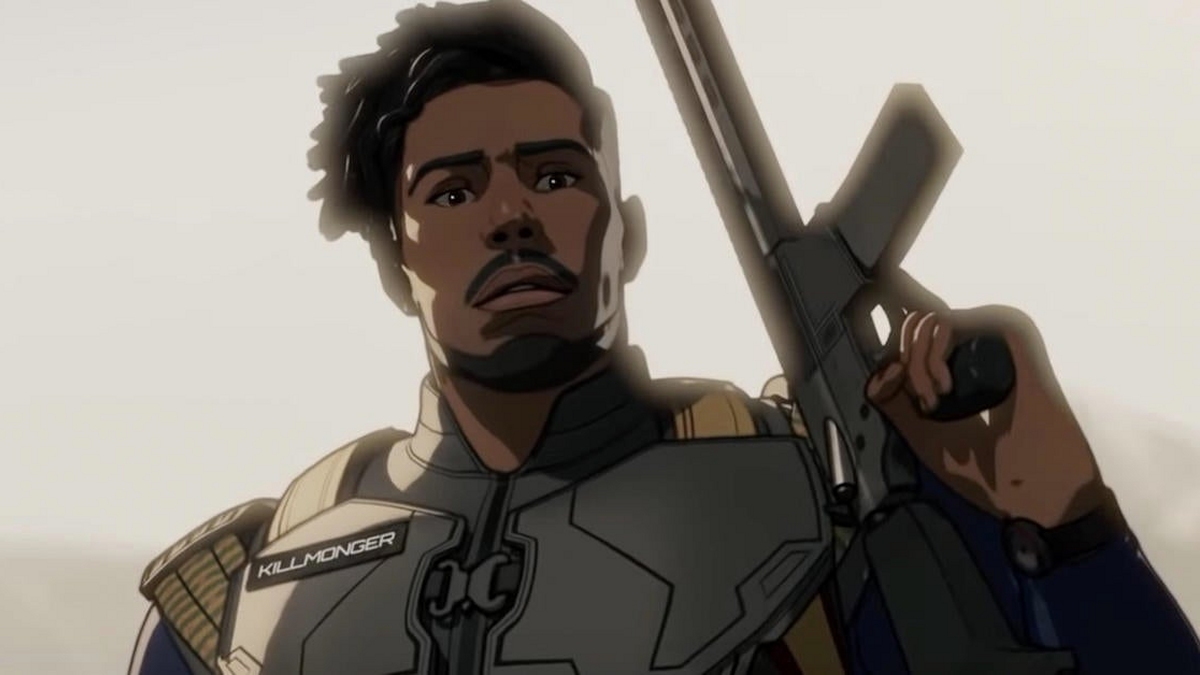 This review contains spoilers for Marvel’s What If…? episode 6.

Episode 6 of Marvel’s What If…?, entitled “What If… Killmonger Rescued Tony Stark?”, might be the flattest episode to come out of the series so far, but it at least works in the way the other Disney+ Marvel shows work. It takes a character from the Marvel Cinematic Universe who didn’t get quite enough time in the spotlight and gives us more. In this case, it’s the charismatic Black Panther villain Erik “Killmonger” Stevens.

As he was only relevant to the Black Panther movie, we get to see the character step out of that bubble and interact with some other MCU mainstays. His connection with Tony Stark cheats the world out of Iron Man, but there’s the question of whether the situation might have a positive effect on Killmonger’s soul, like how his cousin T’Challa inspired Thanos and Yondu to be better people in a different alternate reality. Once that question is answered, the episode meanders until abruptly ending.

If you regularly read our weekly What If…? reviews (try saying that three times fast) you may already know that these pieces have their own unique format. It’s more of a breakdown that we hope will satisfy die-hard Marvel fans but help bring those less familiar with the MCU up to speed.

Alright, let’s get into “What If… Killmonger Rescued Tony Stark?”…

The two main movies you need to see are Iron Man and Black Panther. The whole nexus event of the episode revolves around Tony Stark’s superhero origin, but you don’t need to check out his sequels (even if the Stark drones resemble Whiplash’s handiwork from Iron Man 2). The scene where we meet Ulysses Klaue is an alternate take on his introduction in Avengers: Age of Ultron, but watching that movie is not a necessity for this story.

As always, Uatu the Watcher is Jeffrey Wright. In the Black Panther corner, we get plenty of returning voices like Michael B. Jordan as Killmonger, the late Chadwick Boseman as T’Challa/Black Panther, Angela Bassett as Queen Ramonda, John Kani as King T’Chaka, Andy Serkis as Ulysses Klaue, and Danai Gurira as Okoye. On the Iron Man side, Don Cheadle is James Rhodes, Jon Favreau is Happy Hogan, Paul Bettany is JARVIS, and Leslie Bibb is Christine Everhart.

The military career of Navy Seal Erik Stevens, codename Killmonger, brings him to infiltrating the Ten Rings and uncovering a plan to capture Tony Stark and use him to arm the terrorist organization. Acting on this information, Killmonger appears during the Ten Rings’ violent attempt to grab Stark. When the Stark-branded bomb lands near its creator, Stark is saved at the last second by Killmonger, who throws the bomb into the distance and outguns the would-be kidnappers.

In this reality, Stark’s heart is never pierced with shrapnel and he never finds himself having to build a robot suit…in a CAVE! With a BOX OF SCRAPS! He also doesn’t learn his lesson as he chooses to continue making weapons and even doubles down on it. Killmonger earns his trust further by exposing Obadiah Stane as being part of the kidnapping plot. Stark chooses to promote Killmonger to Stane’s old position (fitting, since Stane’s villain name is Warmonger) and he invests in an old idea of Killmonger’s to create mech-like drones.

Pepper Potts is uneasy with all of this, feeling that Killmonger is hiding his true intentions.

The drones can’t be completed due to the lack of a viable power source. Stark considers Arc Reactor technology, but discards the idea as a pipe dream. Killmonger talks up how vibranium could do it and sacrifices his necklace heirloom to make it work. Inspired, Stark decides to set up a meeting with Ulysses Klaue to buy more vibranium off the black market. James Rhodes acts on Stark’s behalf and that’s when things break down.

Black Panther interrupts the meeting to take back his country’s vibranium. Killmonger appears, subdues both Black Panther and Rhodes, and kills them both. Though not before he chastises Rhodey for working for a broken system that oppresses people like them. He makes it appear that the two killed each other, visits Stark (who is aware of the truth), kills him, and spells it out that the two never truly shared the same vision. As Stark dies from a vibranium spear, the Dora Milaje is blamed and war begins to brew between the United States and Wakanda.

Killmonger kills Klaue and uses his corpse to enter Wakanda and earn the trust of his estranged royal family. He sets up a battle against the Stark drones and leads the Wakandans to victory.

How does it work out?

It’s very open-ended, but it’s a dour situation. King T’Chaka makes Killmonger the new Black Panther. It’s only a matter of time before Killmonger betrays his uncle and gets his long-awaited revenge, showing that even in this reality, Tony Stark inadvertently sets things in motion for T’Chaka getting assassinated. T’Challa confronts Killmonger in the Panther spirit realm and warns him that his actions will have dire consequences.

Meanwhile, Shuri is not fooled by Killmonger’s charms and works with Pepper Potts in hoping to expose Killmonger and prevent the war from escalating.

One of the absolute highlights is the moment of Stark looking over Killmonger’s schematics for his drone idea, which look very Gundam-like. Killmonger sheepishly admits that he likes anime, which is a subtle, in-universe way for the character to admit that his blue, armored uniform is absolutely him trying to steal Vegeta’s look.

The press conference is incredibly satisfying, just in the sense that Killmonger shuts down Stane’s schemes with receipts and confidence, easily nipping that problem in the bud. Happy punching Stane out cold is the icing on the cake. It makes me think about how the plot of Iron Man is incredibly obvious for those who speak Urdu as the Ten Rings terrorists straight-up tell the viewer that Obadiah Stane is behind the kidnapping.

Speaking of the Ten Rings, their involvement certainly feels like it has more weight to it after Shang-Chi and the Legend of the Ten Rings. How fitting that Killmonger would make such a strong foil to the Ten Rings’ leader Wenwu, who is also obsessed with a secretive and fantastic utopian society that considers him an outsider despite a familial connection.

We get our third Chadwick Boseman performance in this series and once again, it hits hard in its own way. The Star-Lord episode was like a celebration of T’Challa that talked up his potential to make the universe a better place. The zombie episode had him give a meaningful speech about remembering the dead and keeping their memories in your heart. Now we see T’Challa’s casket and see him appear as a spirit.

Also, man, for someone who is the key to the Marvel Cinematic Universe, Iron Man has not been doing so good on this show. He’s made three appearances so far and he’s died each time. The comic version of What If…? was never too kind to the likes of Magneto, Loki, Kingpin, or Beast, and now it looks like Stark is their television counterpart.

I think there’s supposed to be an episode coming up about him ending up on Sakaar, so let’s hope he does better that time around.

See you next week! Same Watcher time! Same Watcher streaming service! In the meantime, if you want to dig deeper into What If…?, subscribe to Marvel Standom on the Den of Geek YouTube channel, where we dish out weekly episodes on all the new Marvel TV series, trailers and movie releases. Can’t stand our faces? That’s fair! You can listen to Marvel Standom on Spotify and Apple, too.