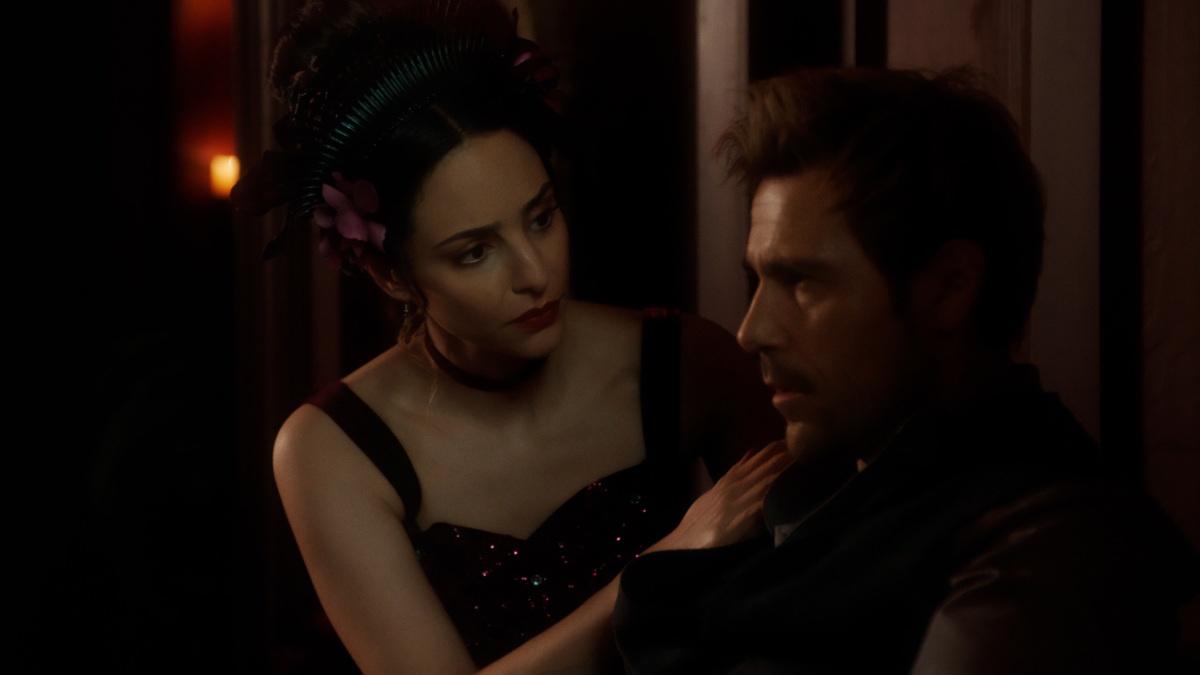 As Legends of Tomorrow season 6 heads towards its close, the shape of the endgame starts to become clearer, and the first piece that is taking shape is the departure of John Constantine. The current season of Legends will be Matt Ryan’s last as the live action embodiment of DC Comics’ most prominent and scummiest warlock (thankfully not his last with the show – he’s returning next season as a new character).

But here’s the thing: as long as Ryan has been Constantine, and as well as Ryan has played him, television’s John Constantine has never quite matched up with the Constantine in the comics, and “Bored on Board Onboard” continues to gently exacerbate the problem. It’s enough to beg a question: is DC setting up the character for a return to his rotten bastard roots?

Legends of Tomorrow’s issue with Constantine hasn’t always been apparent, but it has always existed: he’s too much of a bastard for the superhero show equivalent of Parks & Recreation. This isn’t a criticism of Ryan’s portrayal: he’s been magnificent, appropriately bastard-ish while gelling nicely with the rest of the rotating crew of the Waverider.

The problem is in the character’s core: the Constantine created by Alan Moore and Steve Bissette; then fleshed out by writers like Jamie Delano, Garth Ennis, Mike Carey, and most recently Si Spurrier; that John Constantine is an absolute garbage human being. He’s a mess of contradictions: self-absorbed and manipulative, but passionately anti-authority and capable of tremendous generosity. But he’s almost always looking out for nobody but himself, and willing to screw over anyone he can to get what he wants.

That’s pointedly not what Legends of Tomorrow is about. The Waverider is a refreshing place full of open communication, concern for emotional well-being, and a slew of well-defined, healthy-ish adult relationships. Even when the show pushes a miscommunication for plot reasons (as it did tonight with Mick not telling Kayla about his pregnancy), it usually lasts until the end of the episode. Legends is a workplace comedy that is VERY selective about when it forces its characters to be assholes to each other to heighten conflict.

So what happens when the unstoppable force of smarmy dickhead Constantine meets the immovable object of healthy fun on Legends of Tomorrow? The show mostly dodges it by having Constantine come and go a bit, rarely shining the light too closely on the character while letting Ryan’s natural magnetism mesh with the show’s general good time vibe to make it work. Mostly.

Tonight, the team got trapped inside a board game because Constantine was too magic potioned up to sit through a board game and not make a scene. In that board game (“Mafia” reworked for Edwardian mystery lovers, according to Nate), an evil copy of Constantine goes around murdering teammates as the game’s mystery beast, before it gets fought off by InstaZari, who had confessed her love for John to Behrad earlier in the night.

This last arc hasn’t even really been a metaphor for addiction, it’s been a simile for addiction. John is letting his addiction to blood magic drive his decision making, behaving like an addict who’s also an historically scummy comics asshole. To be clear, Ryan does great with this, but it’s very dissonant with the Legends of Tomorrow we’ve come to adore.

That same dissonance has afflicted Constantine in the comics for a decade now.

JOHN CONSTANTINE AND THE JUSTICE LEAGUE

One of the most controversial changes in DC’s New 52 universal reset was to officially bring John Constantine into the DCU proper. He had existed off to the side, in Vertigo’s shared-with-the-DCU-when-it’s-useful universe, for almost his entire tenure as a going concern. That Vertigo existence allowed the fullness of his assbaggery to be routinely explored, without any need to sync him up with whatever was happening in Gotham City or Metropolis. The New 52 did away with all of that, making John younger and – crucially – putting him on a Justice League team, the awkwardly named Justice League Dark.

This new Constantine was tamed. He was still a mouthy British bad boy, but at this point he had less of an edge than Manchester Black, a foul-mouthed British parody of bastard comics characters who DC had created as a one-off Superman antagonist. The thing is, Vertigo John was explicitly political in a way that was pointless the second you stuck him in the same room as Zatanna and Batman.

John’s earliest stories were mostly about the political hellscape that was late ‘80s Britain: Constantine conning a group of yuppie demons making a huge bet on a Conservative win in an upcoming general election, for example. Or John getting roped into bringing down an apocalyptic Christian cult preying on economically dislocated Brits and stealing their daughters. Or a (secret) branch of the British government tormenting and nearly murdering a queer journalist as part of an attempted cover up. These are all excellent stories, but they’re not the type of villains you put in front of Superman and the Justice League.

There are signs this is changing, though.

THE RETURN OF THE MAD BASTARD

Constantine’s departure from Legends of Tomorrow, taken in isolation, could just be a natural evolution for the show. Characters have been written off and forced out plenty of times over the past seven seasons. It’s not even like the same actor playing two characters is without precedent. But…

The comics have taken a decided turn back to John’s roots in the past couple of years. Si Spurrier, Aaron Campbell, and Matias Bergara wrapped a run of Hellblazer last year that gave us a Constantine who was every bit as slippery as we’d hoped, but also beautifully furious at the world and its politics. This book was steeped in real world politics, from Brexit fishing rights to outrageously racist Conservative MPs, even outright quoting Britain’s Mr. Bean-meets-Verbal Kint Prime Minister. And the other big Constantine comic, Hellblazer: Rise and Fall by Tom Taylor and Darick Robertson, launches with it literally raining billionaires.

With the news earlier this year that HBO Max is developing a Constantine solo show, it’s entirely possible that his departure from Legends of Tomorrow and his back to basics orientation in high profile comics are harbingers of a much more true to his more unpleasant origins John coming to TV screens soon.

John has been held back on Legends of Tomorrow in a way they don’t have to do on HBO Max. A prestige streamer drama can have as its core premise that John is a piece of shit, as opposed to Legends, where that note is always dissonant when it’s rung. And it’s not like HBO, the network home of highly political news and documentary shows like Last Week Tonight, Veep, Succession, or Silicon Valley, is predisposed to ducking the explicitly political. That said, the show is reportedly a spin off of Justice League Dark, so right now we’re just hoping.