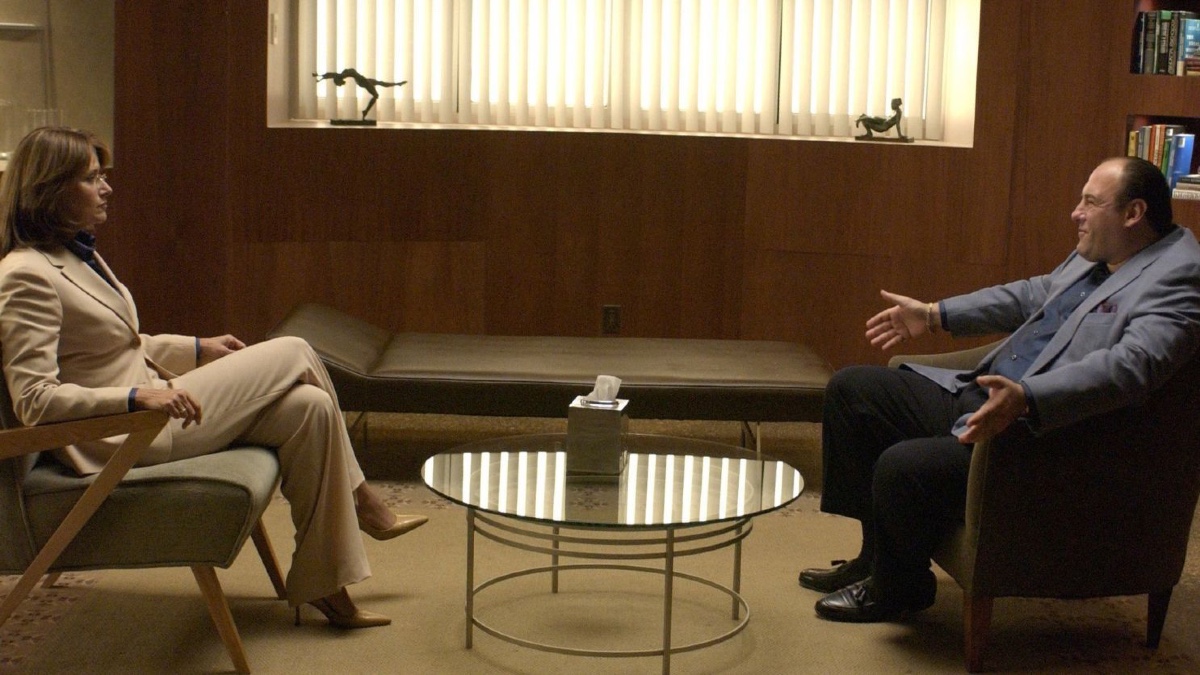 This article contains some spoilers for the six-season run of The Sopranos.

Classic HBO series The Sopranos is now old enough to find new fans who weren’t even alive when it originally aired. Zoomers, or kids born in the late 1990s and early 2000s are increasingly intrigued with the iconic drama for many of the same reasons folks were wrapped up in it back when it premiered in 1999. The show depicts violence in a very raw and realistic manner and shows a faction of organized crime that feels like a time capsule of a period that is now well in the past, while also touching upon a general sense of nihilism that modern viewers can appreciate.

Not coincidentally, The Sopranos also was one of the first programs to dig into human psychology via therapy on a level that wasn’t corny or cartoonish (nobody is lying on a couch in an office with a doctor taking notes in a pamphlet during the session here). The subjects of mental health and the mafia don’t exactly go hand-in-hand, and the shorter attention spans of the modern TV viewer have led to a lack of appreciation for the former topic.

Caught up in the excitement of the dark, violent New Jersey underbelly, some newer fans report getting bored by Tony Soprano’s (James Gandolfini) psychotherapy appointments with Dr. Jennifer Melfi (Lorraine Bracco). Reddit threads are littered with discussions on the odd habit of completely skipping over these scenes throughout the series:

I’m watching for the first time and am on season 2 atm. I just find the scenes with Jennifer Melfi the psychiatrist totally irrelevant and annoying, to the point where I have skipped every scene with her in it. The scenes just feel like a recap, where she explains obvious things that just happened, as if the audience is so dumb we cannot keep up with what is going on in the show.

Other viewers completely understood what the objective of the sessions was, but found it redundant after the first few seasons:

For the first 2 or 3 seasons, I enjoyed the psychiatrist scenes. But after a while I feel they are more of a nuisance and not worth watching. I know it’s a way for the audience to peek into what Tony is thinking, but I don’t find it being worth it.

This is where the show runs the risk of losing an audience that is used to watching media that moves at lightning speed. TikToks, YouTube videos, and cliffhanger culture has zapped the brains of the younger generation to the point that it can be hard to revel in the minutiae of a character’s psychology. They know Tony Soprano is interesting, but they don’t want to figure out why they find him as such.

The Sopranos proved that it was viable to put a murderous criminal in the protagonist role, show him execute his victims, and then go home to his wife and kids like any other American man of the 2000s would. Tony Soprano added obsessive infidelity, mommy issues, sexism, homophobia, and toxic masculinity to his list of deplorable traits, yet the audience still sympathized with him and wanted to understand where he was coming from.

A lot of the audience’s sympathy for Tony can be attributed to his therapy sessions with Dr. Melfi. As has been famously discussed for the last two decades, the show was one of the first to depict a patriarchal man in a position vulnerable enough to seek out professional mental health advice. And those who skip these scenes are skipping one of TV’s best ever storytelling devices.

Tony starts visiting Dr. Melfi in the pilot after experiencing a panic attack while watching a family of ducks flying away from his backyard pool. He continues to visit Dr. Melfi throughout the series as the panic attacks recur and he looks for answers to all of the other predicaments and depressions that overwhelm his inner psyche. He also spills his guts on many matters that painted him in a bad light, but occasionally we get to see his explanations for those inadequacies.

One of the show’s big goals is to demystify and demythologize these mobsters, specifically Tony, depicting them as real people who have personality quirks, idiosyncrasies, and who endure emotional hardships. The whole thing can get very dense because there are multiple layers and subtexts exposed to the audience within a short period of time. Seeing Tony talk about what it all means to him makes it so much easier to contemplate what it means to us.

There is a larger literary debate that extends out much further than just this show: if an author puts something in a text with a specific intent, but the reader gleans something in juxtaposition to that original conversation, is our understanding of the work valid? Is there room for analysis that contrasts with what the artist put out into the world? Without Dr. Melfi, creator David Chase’s work is rife with confusion and laden with concepts that can go awry if absorbed by the less thoughtful TV viewer. She is our Tony Soprano for Dummies handbook; she is the mediator between us and the complex anti-hero on the screen. Tony is relatively the same person at the beginning and end of his therapy, but the treatment is required viewing for us to understand why he performs the actions he does outside of the doctor’s office.

Jennifer Melfi is her own fully formed character herself though, with thoughts, emotions, and opinions on the psychoanalytical treatment she is giving; this is a huge reason why we are able to live vicariously through her. She seeks guidance from her own therapist, Elliot (Peter Bogdanovich) about this criminal client, and in a way is asking the follow-up questions that we still want to know after listening to Tony.

Through it all Melfi is capable of maintaining her own moral compass, passing up the opportunity to use Tony’s violent proclivities to her advantage when she is sexually assaulted in the third season and avoiding the temptation of sexual advances from him in the fifth season. Because she is so grounded, she serves as an effective conduit between us and Tony. If she were compromised in any way, she would run the risk of influencing or enabling Tony’s despicable behaviors more.

If you skip over the therapy scenes, you are missing out on what Tony claims he feels about a lot of the issues that happen in his personal and professional life (his emotions can often cloud the reality of his situation, though.) He wears his emotions on his sleeve a lot more when in the chair than he does in the Bada Bing or sitting with Carmela, Meadow, and A.J. at the dinner table. The main reason for this is because those three people shape his outlook on life a tremendous amount, along with his mother, Livia, and Uncle Junior. His relationship with those five delves into a deeper discussion on how traditional masculinity connects with his Italian heritage and Catholic values.

Melfi helps Tony realize that his mother’s cold child-rearing methods led to confidence issues and doubt over what it means to “be a man” (this is one of the only signs of progress he ever makes in the show). This epiphany becomes a crutch that Tony leans on heavily when compartmentalizing the differences between how his life turned out and the heavy contrast to his own son’s future.

His narcissism creates a void for A.J., who struggles with suicidal thoughts and severe depression when he can’t live up to the depiction of masculinity that Tony exudes. Tony tells Melfi that A.J. is weak and shameful, an admittance that would never come from his mouth when around his family. With Dr. Melfi, we get these fascinating diatribes on the outdated tropes that shape Tony’s own view of himself as a Gary Cooper-esque man in American society. Fast-forwarding is literally skipping past Tony’s characterization.

Additionally, a social issue comes into relevance in the first half of season 6 when one of Tony’s main capos is outed as gay. The majority of the mafia is made up of toxic men with incredibly fragile makeups of masculinity and they immediately want him whacked, or at least eliminated from the group in some way. Tony reveals to Melfi that he doesn’t share all of his associates’ homophobic tendencies, instead putting credence into what a valuable earner his capo is for the DiMeo family. While he’s still not capable of harboring evolved social values outside of the context of the business, he’s revealed as someone who has put thought into what is right and wrong. He’s a bad person, but he’s three-dimensional. Not every layer is evil.

That is why you are truly missing out on who Tony Soprano is if you skip his sessions in therapy. You will only get to see the violence, the hateful rhetoric, the devolved sexism, and the illegal day-to-day activities that make up a typical mobster. With psychiatry, you get to engage in the vibrant cesspool of personalities that create Tony Soprano, the legendary anti-hero archetype of TV lore.

Best Horror Movies on Netflix in October 2021
Halloween Movies Ranked from Worst to Best
The Best Scary Movies on Horror Channel for October
Star Trek Just Made This Deep-Cut TNG Character Into a Captain
Halloween Kills: Where Does the Story Go From Here?