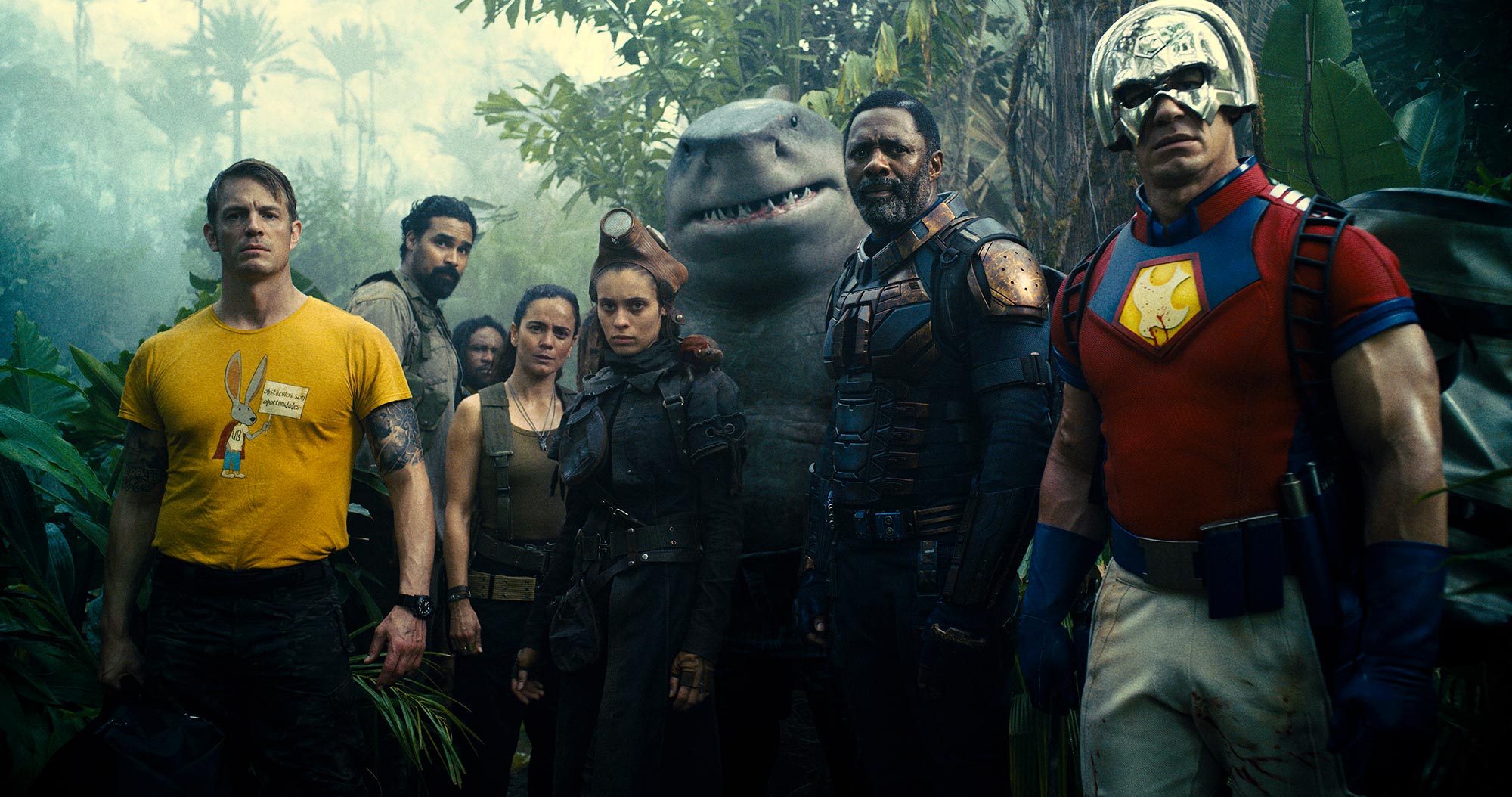 This article contains major The Suicide Squad spoilers. But you could tell that from the headline. We have a spoiler-free review here.

James Gunn’s stunning supervillain flick is a brutal ride through DC’s most deep cut characters and now you want to dig deep into what happened. So we’re here to break down that shocking ending, where we leave our heroes, and what’s next for the Suicide Squad in the DCEU. Well, those of them who survived, at least…

The standalone (sort of sequel) movie centers around the Suicide Squad on a top secret mission. So off they go to Corto Maltese.

We begin with two crews but only one actually survives the opening bloodbath. Those lucky few are led by Bloodsport (Idris Elba) and the crew consists of Ratcatcher 2 (Daniela Melchior), Polka-Dot Man (David Dastmalchian), Nanaue/King Shark (Steve Agee/Sylvester Stallone), and Peacemaker (John Cena).

Later, they pick up Rick Flag (Joel Kinnaman) and Harley Quinn (Margot Robbie), who both somehow manage to survive the trap set by Amanda Waller. After much scheming and fighting, the team kidnaps the Thinker (Peter Capaldi) and make it to Jotunheim, the Nazi prison where the Corto Maltese government have been keeping Project Starfish A.K.A. Starro the Conqueror. But when they get there things begin to spiral out of control and that’s where we’ll begin…

Why Were Peacemaker and Rick Flagg Fighting?

While this is a movie filled with wild unexpected moments, the most shocking–to some viewers–twist comes when the truth about Project Starfish is revealed. And we’re not talking about the fact that it’s actually a giant starfish-like alien called Starro.

No, the real horror here is that Project Starfish is and has always been run by the US government. Yep, it’s the US who have been testing on and torturing innocent humans, and the Squad wasn’t sent to stop Starro but were in fact there to destroy Jotunheim so that the US government and Amanda Waller’s involvement were kept under wraps.

It’s not something that Rick Flag can stomach as he states, “I joined to serve my country not to be its puppet.” It’s an honorable moment that finally makes Flag a true hero, but it’s short lived. Amanda Waller always has a backup plan and here that plan wears red, white, blue, and a shiny helmet.

Gunn’s searing action flick has a lot to say about war, America, and the nature of disposability, and Peacemaker is one of its most brutal statements. He’s a man who believes he “loves peace” but it “doesn’t matter how many people I have to kill to achieve it.” That in itself is the oxymoron of imperialism.

In that way, Peacemaker and Flag represent two different versions of the patriotic ideal. Rick is the idealistic man who wants to do the right thing in the hopes of making his country live up to what he thinks it can be. But Peacemaker wants to protect his country no matter what horrific crimes they’ve committed. That’s why he agreed to be a mole for Waller within the Squad and why he decides to kill Flag when his former teammate wants to leak the records of America’s Project Starfish to the press.

Sadly for us and Rick, Peacemaker succeeds, leaving Flag dead and the American ideal shattered.

With Peacemaker planning to stop the truth about Jotunheim from coming out at any cost, his next target is Ratcatcher 2 (Daniela Melchior). After the explosions incapacitate them, the brilliant young heroine grabs the disk with the damning records, leading Peacemaker to hunt her down.

Just when it seems like he’s going to add another Squad member to his kill count, we skip backwards eight minutes. Here we see that Bloodsport, King Shark, Polka-Dot Man, Harley, and Milton have been setting the charges, which end up going off too soon. As they start to explode (and after the tragic death of Milton), Bloodsport ends up falling through the building on a large slab of concrete, landing in front of Peacemaker as he’s about to kill Ratcatcher 2.

As he draws his weapon, Peacemaker does the same, leading to a fatal shootout. And in a hilarious callback to an earlier gag when Peacemaker claimed he could shoot better than Bloodsport thanks to smaller bullets which would shoot through his enemies’ bullets, Bloodsport beats him using exactly that tactic, apparently killing Peacemaker (more on that in a moment) and saving Ratcatcher 2.

It’s a key moment for Bloodsport, who made a promise to his surrogate daughter that he’d get her out alive, and it’s the perfect way to wrap up Bloodsport’s arc in the film, from estranged father of a young daughter to a man trying his best to form more connections under difficult situations. Yay for the world’s best bad dad!

The Suicide Squad Takes a Stand

Now that Jotunheim is destroyed, Waller calls the remaining Squad–Bloodsport, Polka-Dot Man, Harley, King Shark, and Ratcatcher 2–telling them they have to go back to the US. But there’s one big problem: Starro is now freed and the giant alien is on a rampage.

After decades of being tortured by Gaius Grieves A.K.A. the Thinker, Starro believes the city belongs to them and starts shooting out mini Starros in order to turn the population into mindless zombies. Starro is able to create countless self-replicating copies of itself, so the carnage being wreaked on Corto Maltese is probably only a preview of how quickly Starro could spread their influence throughout the entire world if left unchecked.

For a moment it seems like the Squad will head back into Waller’s cold and cruel arms, leaving the people of Corto Maltese to their gruesome fate. But at the last moment Bloodsport chooses to go back and is soon joined by the rest of his crew. It’s a massively powerful moment and one that transcends even our core team as before Waller can blow their heads up her colleagues knock her out and begin to help the Squad on their unauthorized but massively heroic new mission to stop Starro and save Corto Maltese.

It’s one of several moments in the film that drives home the harder edges of Amanda Waller, who is played as close to a villain in this film as someone like Thinker or Corto Maltese dictator Silvio Luna.

The Final Fate of Polka-Dot Man

David Dastmachlian’s performance as Abner Krill AKA Polka-Dot Man is one of the many stunning turns that the film has to offer. And while we’d love to say that the villain turned hero gets a happily ever after that’s not the case. In fact Polka-Dot Man gets an ending as tragic as his origin. After being tortured by his mother who infected him with a parasitic alien virus in the hopes of making him a superhero he became the villain known as Polka-Dot Man.

It’s not a conscious choice but more of a compulsion as he has to expel his deadly polka dot pustules or he’ll die. It’s the grossest power in a movie full of gross powers but as the crew face down Starro Abner finally comes into his superheroic own.

As Bloodsport becomes the leader Waller always knew he could be, he uses Abner’s fear of his mother and the hallucinations he has of her to help him channel his powers into destroying Starro. Bloodshot yells “It’s your mother” and we see Starro through Abner’s eyes, the creature is transformed into a kaiju-sized version of the woman who ruined his life. His polka dots end up destroying one of Starro’s legs, and Abner celebrates screaming “I’m a real superhero!”

Just as Polka-Dot Man realizes his truly heroic nature, he’s killed by another of Starro’s limbs, crushed but finally happy in his last moments. It’s a fittingly bittersweet end for the unexpected and relatablely depressed hero.

The Final Fate of Starro

Fighting a huge roaming starfish is no easy feat. It takes everything the Squad has to take down the monstrous creature, including that tragic sacrifice of Polka-Dot Man. When they catch up with Starro in the city, Harley takes the high ground using Javelin’s javelin to burst through Starro’s eye as Bloodsport and Ratcatcher 2 try to incapacitate the huge beast.

As Harley swims around in Starro’s bloody eye she’s joined by thousands of rats called by Ratcatcher 2. The rodents swarm Starro, overcoming him as Ratcatcher 2 protects Bloodsport from his childhood fear come to life.

And with that, Starro is gone.

Though Starro might have been a murderous alien kaiju by the end of the movie, they began life as a harmless creature floating through the stars, kidnapped by the American government. To kill him is a tragic but necessary act and one that cements the Squad as very much anti-heroes rather than the villains they began as.

What’s Next for the Squad?

While we know that Peacemaker will get his own spinoff TV series on HBO Max (more on that below) it’s unclear what the rest of the crew will be doing after this. One thing is clear, though. They all have the freedom that they never thought they’d achieve.

After killing Starro, Bloodsport blackmails Waller into letting him, Harley, Ratcatcher 2, and King Shark go. It means compromising Rick Flag’s final wish to reveal the truth of what Waller and the government did in Corto Maltese but it also allows Bloodsport and his crew to avoid returning to Belle Reve. It seems like the crew might stick together, especially in the case of Ratcatcher 2 and Bloodsport.

Plus, once Flag’s friends find out that Peacemaker is still alive, they might have a score to settle. About that…

The first of two post credits scenes is the big one. After we think that one good thing happened in this movie A.K.A. Peacemaker being killed by Bloodsport, Gunn has a shock for us.

See, Peacemaker survived–to star in his upcoming HBO Max series–and Waller has sent two of her best to pick him up from his hospital bed where he’s recuperating in order to do nothing less than “save the fucking world.” After the brutal horrors that Peacemaker committed during the film, it seems strange that he’ll be taking a leading role in a TV series. But after the smart subversiveness of The Suicide Squad we’re cautiously optimistic.

If you wait until the final moments of the credits once we’re done with all the good stuff like Special Thanks and celebrating all those amazing visual effects artists, then you’ll get to this gnarly and hilarious little stinger.

If you throw your mind back to the beach-set murder fest at the beginning of the movie, the first character to apparently die is Weasel because no one checked whether ot not he could actually swim. It’s a sad and grotesque way to start the film, but there’s good news for anyone who loves the grody child-killing beast: he’s still alive. After all the drama of the past few days Weasel just popped back up and is totally and utterly alive. That means the people of Corto Maltese should probably watch out as there’s a murderous Weasel in their midst!

The Suicide Squad is on HBO Max and in theaters now!

Lamb Ending Explained with Noomi Rapace
Why Spider-Man: No Way Home is the End of an Era for Tom Holland
Todd Haynes Slowly Peels the Cover Off The Velvet Underground
Doctor Who’s Scariest Episodes: One Fan’s Horror Highlights
The Best Cosplay at New York Comic Con 2021