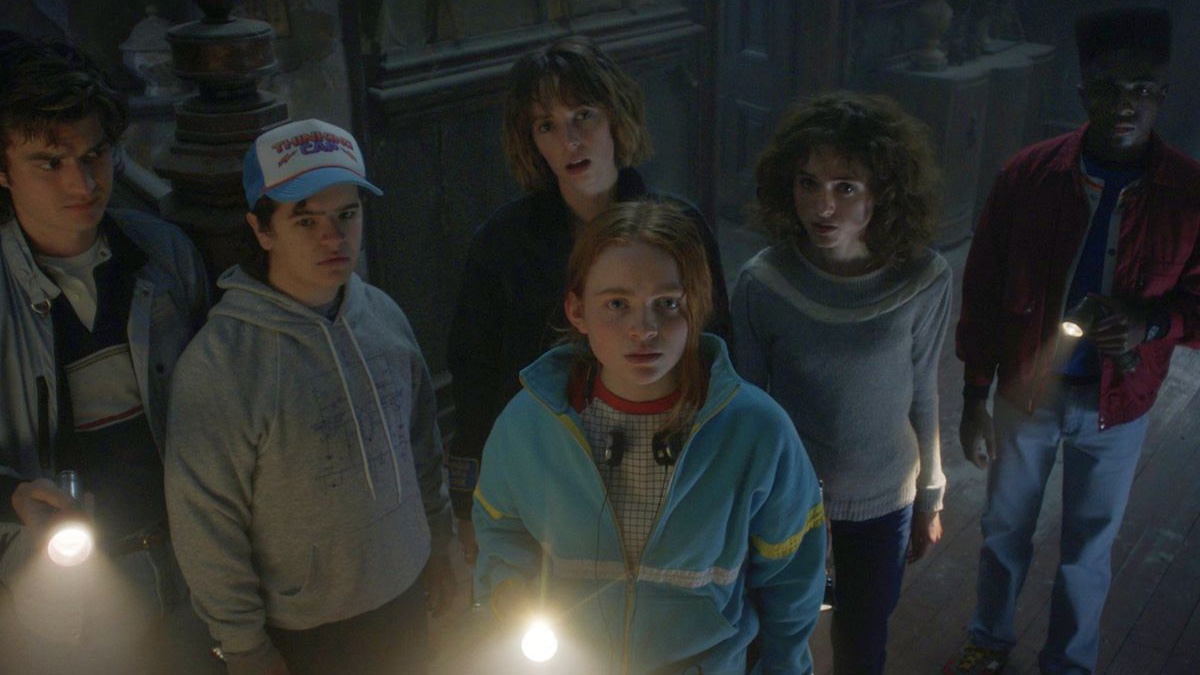 Netflix has apparently decided that the years 2020 and 2021 were strange enough as is. The streamer announced today that Stranger Things season 4 would not premiere until 2022.

Thankfully, the announcement was accompanied by an exciting new teaser that features the very first footage from Stranger Things’ fourth outing. Give it a watch below!

And here is the link to the Twitter trailer should YouTube’s falter. As you can see, Netflix really loves that upside down text feature as it promises to “see y’all in the upside down.” And why wouldn’t it? Four seasons in, Stranger Things remains arguably one of the biggest hits in the streaming world. The glimpses we get as season 4 in that trailer suggest this latest go-around won’t be any less successful.

In this clip, we get to see an Avengers’ style hero shot of most of Stranger Things’ main youthful players. Steve Harrington (Joe Keery), Dustin Henderson (Gaten Matarazzo), Robin Buckley (Maya Hawke), Max Mayfield (Sadie Sink), Nancy Wheeler (Natalia Dyer), and Lucas Sinclair (Caleb McLaughlin) are all gathered in what can only be described as a haunted mansion. A little later on Steve appears to be quite literally underwater.

The trailer also makes time for prominent appearances from the show’s two breakout stars: Millie Bobby Brown as Eleven and David Harbour as Jim Hopper. Eleven is being held back by men in suits (who had better hope that her psychokinetic powers don’t suddenly return). Then we get to see Jim Hopper, hair shaved, wearing a red, white, and blue jacket, and wielding…a freaking flamethrower!

It would appear that Chief Jim Hopper’s time in a Soviet prison has changed him. This character’s evolution from schlubby but lovable small town sheriff to full-on action hero has been one of Stranger Things’ true delights. His fashion evolution has pretty closely matched each year of the show’s ‘80s progression as well. Season 3 saw Hopper wearing a Miami Vice-style Hawaiian shirt. Now he’s wearing a distinctive puffy jacket like many of his fellow ‘80s film protagonists. Think of An American Werewolf in London’s red jacket or Marty McFly’s puffy orange vest.

While the trailer is light on actual details regarding the plot of season 4, we can all safely assume it will be pretty epic. In speaking to Den of Geek for his upcoming film Free Guy, Stranger Things producer Shawn Levy deploys the word “epic” not once, but twice to describe the show’s fourth season.

Levy’s hype statement corroborates what creators and showrunners the Duffer Brothers have said about the season previously. After three seasons in Hawkins, Indiana, Stranger Things’ storytelling goals can no longer be bound to one small Midwestern town. Though the sight of Hawkins High School cheerleaders in the teaser confirm that the show will season some time in Hawkins, the season is set to include multiple other locales.

After all, somebody’s gotta get action hero Jim Hopper out of Kamchatka.

The Batman May Be Even Darker Than the Trailer Suggests
The Last of Us HBO Series Set Photo Offers First Real Look at Joel
Metroid Dread Could Break the Franchise Sales Curse With No Compromises
Halloween Kills Review: Michael Myers Movie is Filler But No Thriller
James Bond Actors Ranked from Worst to Best