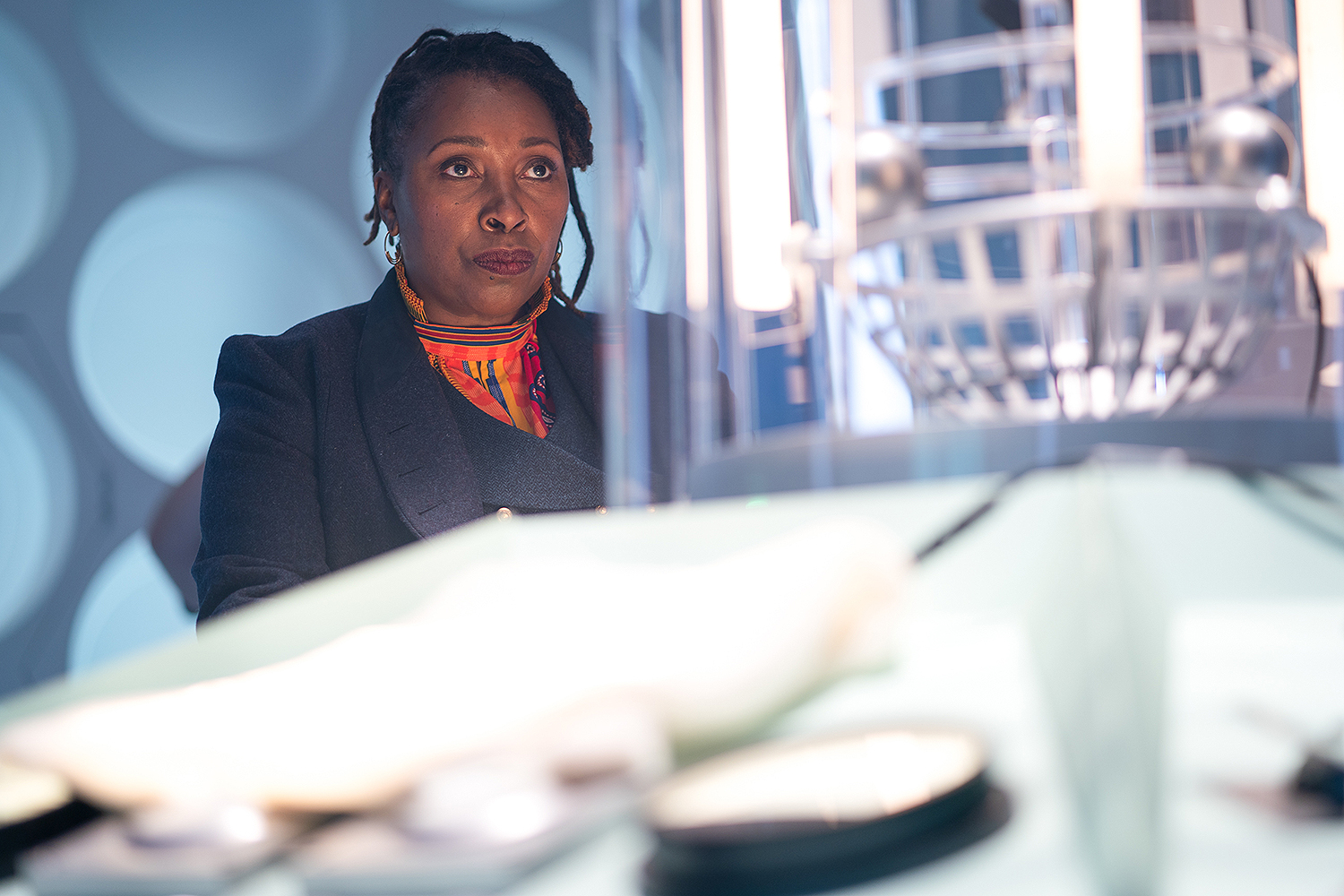 The BBC recently announced Jodie Whitaker, along with current showrunner Chris Chibnall, will be departing Doctor Who. Their departure will occur after Season 12 premieres later in 2021 plus three specials to air during 2022. Speculation over who will be the next Doctor is inevitable, but this time around there is a candidate already waiting in the wings who passed their audition with flying colors: Jo Martin.

Ruth Doctor, officially known as the Fugitive Doctor, first appeared last season in the episode “Fugitive of the Judoon.” Her character’s initial cover backstory was immediately endearing to many Doctor Who fans, as we meet the Fugitive Doctor when she is working as a tour guide in Gloucester. In reality, she is a Time Lord on the run from Gallifreyan authorities. Although her initial appearances were a plot device and admittedly conceived as a random afterthought, bringing Martin back for a full series run will not only heal a major plot hole but also set a new positive direction for Doctor Who. Martin brought incredible energy to the role. It would be a shame to let that momentum die on the vine of shifting canon. For a series that prides itself on having multiple timelines and adventures at the same time, the show very sparingly takes advantage of this aspect of its premise. A Martin Doctor in the hands of a showrunner who wants the opportunity to chart a new set of adventures would be sure fire way to bring back many fans who were dissatisfied with Chibnall’s run of Doctor Who, as well as bring in the next generation of fans.

Setting up a new season with Martin’s Doctor as the main Doctor can be done while adhering to the tradition of resetting major canon events after a showrunner exits. It’s as simple as never mentioning the existence of The Timeless Child plotline. There have been breaks in continuity before and plot holes Doctor Who fans have come to expect. Fans can easily live with a reset that brings Martin’s Doctor into the main timeline. There’s also room for the new showrunner to lean into the fan theories around her character. Some believe Martin Doctor’s TARDIS is proof she fits sometime around the Second or Third Doctor era. Modernizing lost episode scripts, bringing back classic monsters with better CGI and modern sensibilities, or creating new adventures based on previously unused ideas. The possibilities are as infinite as time and space.

The challenges of executing a full season led by Martin’s Doctor cannot be ignored. So far, Doctor Who has not had any Black or POC showrunners. Malorie Blackman, who wrote “Rosa,” has been the only Black screenwriter to write or co-write an episode. British-Indian scribe Vinay Patel wrote, “Fugitive of the Judoon” and “Demons of the Punjab.” Both of these landmarks occurred only recently, in the Chibnall era. Chibnall’s execution has not been perfect, but this does not mean the solution is to turn back the clock and close the door. If the show chooses to have another white screenwriter, they still have the full resources of the BBC to find the right talent to take on the opportunity of giving Martin’s Doctor an authentic and culturally sensitive voice. Focus groups, sensitivity readers for scripts, and diverse screenwriters will avoid repeating the tokenization mistakes of past episodes. There is also the challenge of moving the Doctor’s view of the world away from a white perspective. If the Doctor is really as all-knowing as the series claims, it’s clear the limits of the character’s worldview have only been set by previous showrunners.

Social media and streaming services have brought the series to countries Classic Who fans have only seen on a map. The future of the series depends on international financial investment through television licensing, merchandise deals, and viewership. Overcorrecting Chibnall’s uneven character development for Yaz and Ryan and accidental stereotyping of minority characters by going even harder towards pandering to the white male fans who don’t want to see increased racial diversity will create a much bigger problem. Sinking ratings, especially in the US and international outlets, means lost revenue for the BBC, which is already facing budget cuts. Losing out on licensing profits means new episodes will be more expensive or impossible to air.

Although many white women and white queer fans felt the Thirteenth Doctor was the first time they were truly represented by the Doctor, this view leaves out many Black and POC fans who are still waiting for a Doctor who looks like them. Martin’s appearance was a beacon of hope for many fans that the view from the TARDIS would look eventually like their own. Martin has inspired so many fans of color to get into cosplay, making fanart and fanvids all around the world. Although I was excited to see what Jodie Whitaker would bring to the table when she was first announced, I was even more elated when Martin introduced herself as the Doctor.  For those concerned that a non-white Doctor could potentially alienate fans, it must be pointed out that many fans have stopped watching Doctor Who because past promises of more inclusivity were broken. In addition, quite a few white critics of Seasons 11 and 12 were impressed by Jo Martin’s performance. Listening to the voices who demand the show remains in the past will only mean that the series will not be attractive to many already existing fans, as well look dated and stale to viewers who are seeing other sci-fi franchises prioritize diversity and inclusion.

The BBC has already pledged more racial inclusion in new productions, and the lead role in one of their longest-running franchises would be a great place to demonstrate this commitment to the entire world. The gift of seeing yourself fully in your favorite TV show is a gift that many fans are begging Doctor Who not to take away, and to build on. Martin’s introduction in a season with the tagline “Space, For All” is much more than a PR tagline. Ending the casting search for the next Doctor with Jo Martin is a fine place to start.