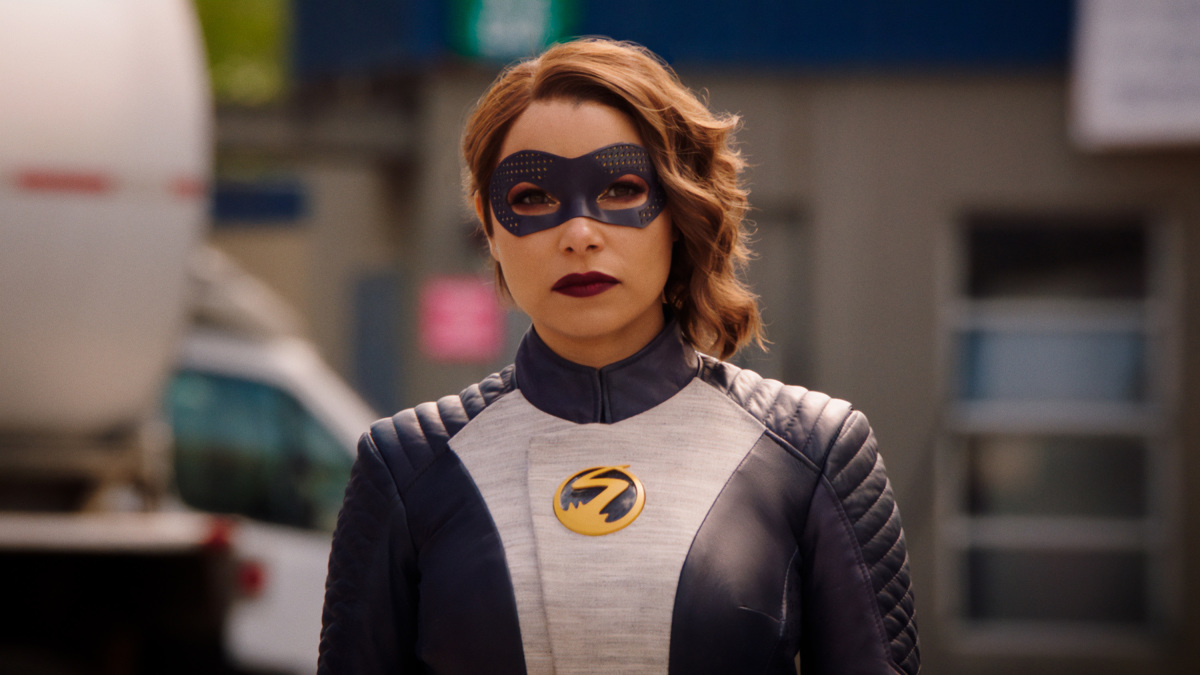 This The Flash article contains spoilers.

The Flash Season 7 ends as it lived, with a mixed-bag finale that is generally entertaining to watch, but that doesn’t make much sense if you look at it too closely. “Heart of the Matter, Part 2” gives us some highly entertaining visuals (the Flash family runs together at last!) and the surprising return of an old enemy (welp, we made it almost two entire seasons without Eobard Thawne!), but, on the whole, this isn’t an hour that feels like a conclusion that’s especially worthy of the story that kicked off last week.

But despite the multiple head-scratchingly bizarre narrative swerves in the second half of this two-parter, a ray of light remains: Nora and Bart Allen. The arrival of Barry and Iris’ kids from the future provides a positive burst of pure delight in an otherwise dour season, and one can only hope they’ll stick around to sprinkle some sunshine on the series’ canvas next year.

Jordan Fisher’s excitable, emotional Bart Allen is as charming as we might ever have hoped, but it’s Jessica Parker Kennedy’s quiet sparkle that really makes their sibling relationship work. Playing a slightly different version of Nora than the girl we last saw in Season 5, this incarnation of XS feels lighter and freer than we’ve ever seen her – and so much fun to watch.

“[Playing Nora], it feels very much like coming home,” Kennedy tells Den of Geek. “I love her, and I related to her on so many levels. [This is] a different version of her, but it’s also very, very similar.”

This version of Nora is missing much of the anger and resentment that drove her first incarnation, having grown up in a timeline where her relationship with Iris was completely different (and much more healthy) than the one in which she blamed in mother for her father’s absence in her life. Yet her family still remains the driving force behind everything this Nora does, particularly her affection for and feelings of responsibility toward her younger brother.

“She’s definitely more mature. She’s physically older. And she’s responsible for a little brother who’s very much like her OG character [used to be]. And he’s always in the way and doing the wrong thing. So there’s a definitely parenting element that she’s had to take with him. it’s a balance of caring for him, but also tolerating him at the same time.”

Kennedy credits onscreen sibling Jordan Fisher with the pair’s believable sibling bond, calling him “a really special person” and “all the things I would want in an acting partner.”

“The love is very strong [between Nora and Bart],” she says. “They love each other, they’re completely there for each other. I mean, for goodness sakes, they’re superheroes together That’s something that only they can understand, really. And they definitely watch each other’s backs.”

Fisher’s Impulse has lived up to his character’s name throughout this two-parter, rushing into danger whenever the opportunity presents itself. He unwisely tries to rescue John Wesley Shipp’s Jay Garrick from the clutches of the Godspeeds and ends up in a coma for his trouble, an injury that’s only healed thanks to the convenient intervention of the Speed Force herself.

“Bart definitely loves attention, and he wants to be a famous superhero, and he wants to be the best superhero. And in all of those things, he takes a lot bigger risks than I think this version of Nora ever would. So they giggle together a lot. And then two seconds later, she’s yelling at him about something. Which is adorable.”

For those who are curious, Kennedy names Fisher’s Bart as the “mama’s boy” of the family, while admitting Nora is more of a “daddy’s girl.”

“Her dad is literally her hero. She thinks her dad’s the coolest person in the world,” Kennedy says.

Many fans will likely name the scene in which Barry, Iris, Nora, Bart, and Jay suit up together as the episode’s most satisfying, and it does feel like a visual moment that’s been a long time coming. (Thanks to a dose of extra speed from Speed Force Nora even Iris gets to be part of the speedster action.)

“It’s just the coolest thing ever,” Kennedy laughs when asked about the Flash family running together for the first time. “It’s really nice to see the four of them so close.”

The sequence in which the extended Flash family takes on a group of Godspeeds feels like it could have been lifted straight from the pages of a comic book, but for Kennedy, it’s the emotional aspect of their family team-up that hit home.

“I was raised without any brothers or sisters, and I was raised by a single parent,” she says. “So there’s a lot of make-believe that I really enjoy when I’m there having a mom and a dad and a brother.

“I think there’s something healthy –  to fantasize about what it might be like to have this idealistic family,” Kennedy continues. “That’s sort of a very personal answer for me. [But] there’s just a fun fantasy about it.”

“Heart of the Matter Part 2” ends with Barry and Iris holding an impromptu vow renewal ceremony in the living room of the West home. Bart and Nora are both in attendance and neither mentions heading back to 2049 anytime soon, indicating that they might still have some unfinished business to deal with in our present day. (Heck, we haven’t even seen Bart meet Joe yet!)

Could we see the extended West-Allen family take on some more bad guys in Season 8 together? At the moment, Kennedy is as in the dark about her character’s The Flash future as we are, though it sounds as though she thinks a return is possible.

“I feel like if it was supposed to –  if they went home and were never seen again, there would have been a scene that said, okay, ‘Bye, guys! Bye forever!’ You know?” Kennedy says. “The beautiful thing about being a part of something [like this show] is that there’s always a possibility for all of these things.”

But if Kennedy had her way, she would absolutely like to see more of Nora on The Flash.

“If I could call the showrunners and wish it I would be like, please bring us back. That would be the coolest thing ever. And people seem to really like watching the two of us on screen together. So I would hope that they would bring us back a little bit more trouble.”

As for what kind of trouble, precisely, Kennedy has a wishlist of things she’d like to see Nora get the chance to do on The Flash someday.

“I always thought it’d be really cool for Nora and Killer Frost to have some cool episode –  because I think Killer Frost is someone that would intimidate Nora a little bit but that she would also think she’s like the coolest ever and would love to work with her.

I just want to fight crime with some other people other than my mom and dad.”