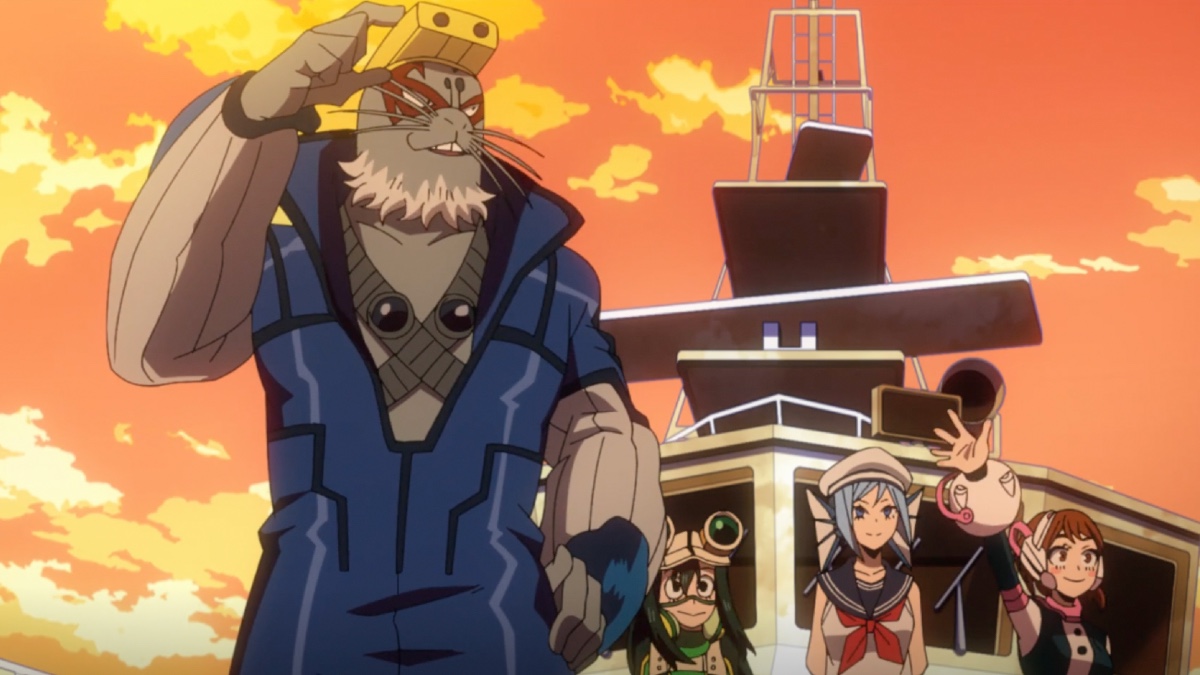 It’s not easy to strike a healthy balance between fun and work, yet this is something that’s important for not just the prospective heroes to properly master in My Hero Academia, but also the series itself. My Hero Academia season 5 crafts a complex narrative where it begins to tease multiple story threads at the same time, but sometimes struggles with how to give them all appropriate attention. “Long Time No See, Selkie” definitely comes across as more fun and games than the doom and gloom mentality that’s beginning to take over the Endeavor Hero Agency, but the episode finds an equilibrium where it attempts to give the audience everything. This turns “Long Time No See, Selkie” into a refreshing adventure with some impressive fight sequences, but also an episode of My Hero Academia that can be skipped with zero consequences.

There’s a lot of heart in “Long Time No See, Selkie,” but the energy that it gives off is much more aligned with filler content, an OVA one-off, or even material that fills up the B-plot of a My Hero Academia movie, especially with the coastal Pacific Ocean locale where all of this mayhem occurs. The big problem that needs to get solved in “Long Time No See, Selkie” hinges on the growing prevalence of Trigger, the dangerous Quirk-enhancing drug that continues to get into the wrong hands. A colossal amount of Trigger gets robbed from a factory and the Pro Heroes rush to keep it from spreading further. It’s a relatively simple goal in comparison to what the Pro Heroes have been dealing with over the past two seasons, but it also gives more evidence to Shigaraki’s mounting plan and its many layers. There’s new movement happening from all sorts of villains, which continues to hint at the presence of something even more sinister.

“Long Time No See, Selkie” props up some of My Hero Academia’s worthiest 1-A students, but the unsung star of this installment is the anthropomorphic seal, Selkie the Shipwreck Hero. Selkie first made a big splash during the tail end of My Hero Academia’s second season during the onslaught against Stain. Ever since, Selkie has largely remained in the background other than Tsuyu’s fleeting interest in working for him before her priorities ultimately shifted over to Ryuku’s Hero Agency. ”Long Time No See, Selkie” gets to add a bit of closure to that lingering piece of character development when Tsuyu’s time with Ryuku directly comes to a head with Selkie’s organization and she gets to experience a little of the road not traveled.

When given the opportunity, Tsuyu Asui always rises to the occasion and proves that she’s not just some quirky frog girl. The Joint Training Competition helped demonstrate how Tsuyu has improved as a hero, but her spontaneous actions here speak even more to this. Tsuyu attempts to stop a plane with her tongue, which may not work, but it’s incredibly bad-ass and proves how she continues to grow and has become even more fearless in battle. Alternatively, the chemistry between Selkie and his second-in-command, Sirius, is really entertaining. The constant debates over whether his strange shtick is actually cute or not is a running gag that works each time. Selkie’s mighty “Selkie Punch” also blurs the lines more between this aquatic captain and Captain Falcon.

Captain Selkie and his mission make it seem like they’ll be the only heroes here, but Ryuku and her team soon play a vital role once additional air support is necessary after Selkie gets overwhelmed on the water. Tsuyu thrives with Selkie, but it’s Ryuku that gives Uraraka her biggest opportunity. Nejire Hado of the Big 3 is also an important member of this team, which helps demystify the hero a little more and make her more of an actual character. Ryuku and Nejire’s airborne sequence is really beautiful and a nice contrast to the “Oki Mariner’s” voyage, especially when these two group attacks come together. It’s an excellent counterpoint to Selkie and Tsuyu’s tandem underwater sonar maneuver. All of these Quirk attacks on the water also really make “Long Time No See, Selkie” occasionally feel like an episode of One Piece.

It’s beneficial to have these teams all work together, but “Long Time No See, Selkie” briefly turns into a beach episode with the girls while they’re allowed to enjoy some downtime before matters intensify. It’s a shame that Minoru Mineta couldn’t swing an internship with Ryuku’s Hero Agency. Also, did the episode imply that these carefree girls cooked and ate a sea turtle for their afternoon snack? This burst of fun adds to the filler nature feeling of the episode, but this temporary peace also reflects the darkness that’s on its way. Selkie can feel this and these fun and games are tolerated because it may be the last opportunity for them for a while. It’s an effective way to add tension to these lighter scenes and help justify this sillier material when the circumstances behind them are surprisingly nihilistic.

The light thief storyline culminates in Selkie and Tsuyu taking care of business on the enemy vessel, but the actual time spent with the threat is very fleeting. The majority of “Long Time No See, Selkie” is devoted to the scenic reconnaissance sequences where Selkie, Ryuku, and company search for their target, or the relaxed celebration that happens before and after it all. “Long Time No See, Selkie” aims to be a breezier episode that momentarily turns down the danger before it returns with Endeavor and his squad, but it still feels like a more effective balance could be reached here where these villains actually come across as a more substantial threat.

These enemies are non-entities and they become excuses to show off everyone else’s powers and teamwork rather than amounting to a real danger. It’s still very effective how “Long Time No See, Selkie” gives everyone their opportunity to shine. The climax where Sirius and Uraraka work together and give this encounter a glorious aerial finish is a satisfying way to properly play all of these characters to their strengths. It’s also a lot easier to be on point and focused on success when the prospect of a beachside barbecue looms overhead as the reward. Uraraka temporarily has to go all Sully Sullenberger, but it’s an exciting finish that’s a change of pace for how most situations in My Hero Academia get resolved. Her new hero costume is also a blast.

“Long Time No See, Selkie” frequently accentuates the positive, but it still teases bigger conflicts. Otheon, a country in Europe, gets mentioned in a capacity that might be fuel for the upcoming movie and its global scope, or hint more towards the imminent Meta Liberation Army disaster. A “salvation for humanity” collects power in the background, whether as a part of the Meta Liberation Army attack, or in opposition towards it. More powerful and mysterious players get added to this conflict.

My Hero Academia is currently in a period of optimistic ignorance that can be a lot of fun in the moment, but produces episodes that feel light and disposable. “Long Time No See, Selkie” definitely fits into this trend, but it’s the best kind of frivolity that spotlights characters that deserve it. The plot here might be minimal and the stakes are considerably lower than usual, but the flowing, passionate action sequences help make “Long Time No See, Selkie” a pleasurable vacation.

Link Tank: How The Legend of Zelda: Skyward Sword HD (Almost) Fixed the Controls
Should Netflix’s Pokémon Live-Action Series Explore the Franchise’s Dark Side?
Doctor Who Series 13: What is the Swarm?
Loki Season 2 Will Likely Explore Mobius Backstory
New A24 Horror Movie Lamb Could Be the Craziest Film of the Fall