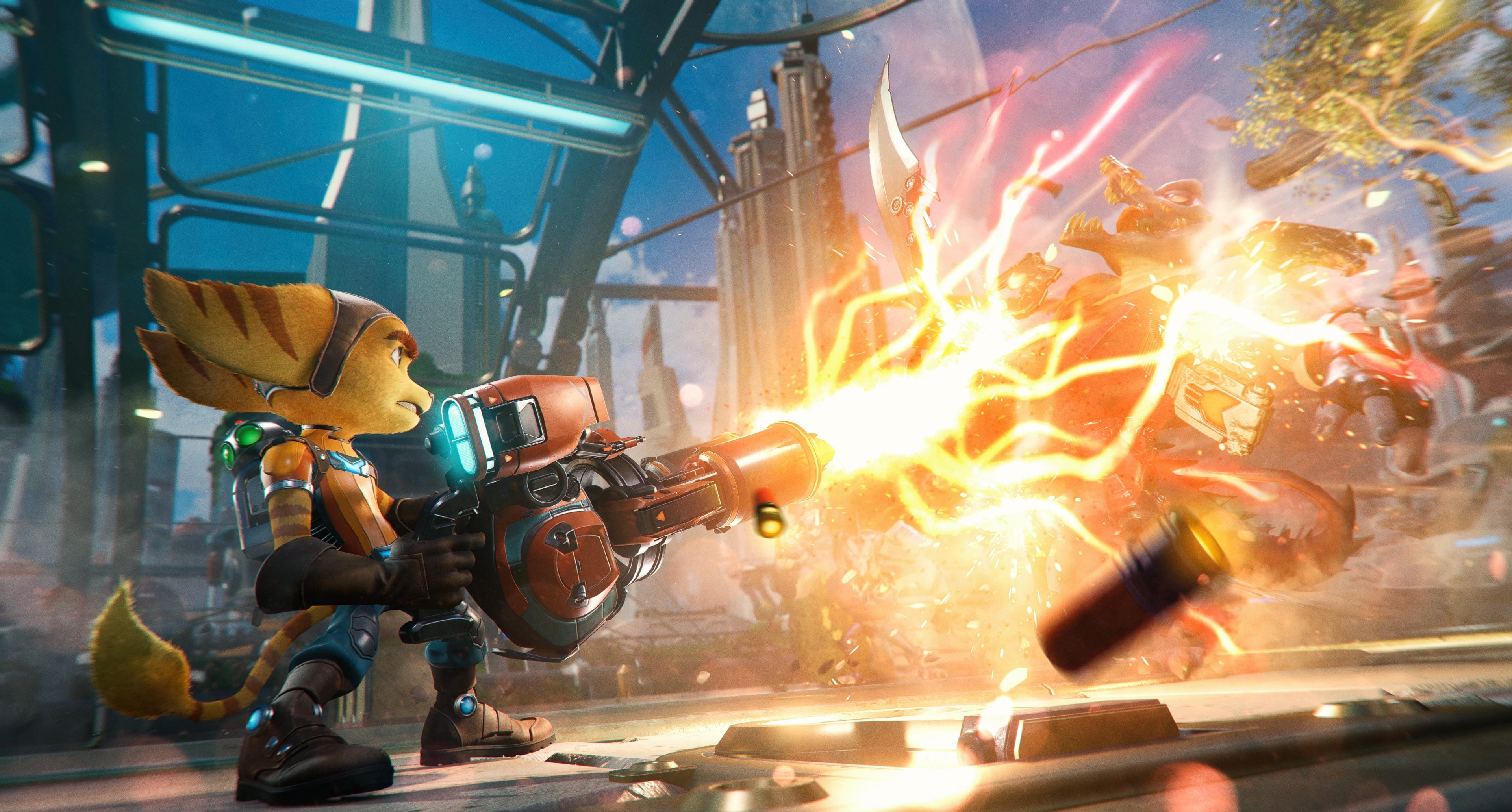 As the first major PS5 exclusive released since the console launched last November (with due respect to the incredible Returnal), many fans hope that Ratchet & Clank Rift: Apart will show us what the next generation of gaming technology is capable of.

That’s a lot of pressure to put on any game (even the latest entry in a proven franchise from an incredible studio), but considering that it could be a while before we get another major PS5 exclusive from a PlayStation Studios team, it makes sense that so many PS5 owners (and prospective PS5 owners) are treating Rift Apart as our clearest look yet at the future of console gaming.

Does Rift Apart live up to those lofty expectations? That’s the question we’ll try to answer as we dive into some of the game’s performance accomplishments (and a few shortcomings) to see whether or not this is indeed the best-looking PS5 game yet.

The PS5’s SSD is arguably the console’s most important piece of hardware. While even a basic SSD offers a significant improvement over previous-gen hard drives, the PS5’s SSD could theoretically change the way studios think about game design.

The problem at the moment is that studios have had relatively little time to explore the potential of the PS5’s SSD. That’s what makes Rift Apart so impressive. While I strongly suspect that the next batch of PS5 exclusives (the 2022 lineup) will outclass anything we’ve seen so far from a technological perspective, Rift Apart is most certainly ahead of the curve when it comes to showing us what the PS5’s SSD is capable of.

I previously talked about how the PS5’s SSD may eventually be used to create massive worlds free of loading times but filled with new exploration opportunities. That’s not really what Rift Apart goes for, though. Its levels are comparatively smaller than the areas in open-world titles, and the paths through those levels are significantly more linear.

However, Rift Apart does prove that the PS5’s SSD allows for the kind of on-screen chaos that used to make consoles sweat. When your gun is spitting out the most impressive particle effects you’ve ever seen in a video game while you’re using rapid movement mechanics to dodge an equally technologically impressive onslaught of projectiles and enemies, it’s easier than ever to appreciate how the PS5 technological advances eliminate so many design compromises.

Yet, it’s the game’s seemingly quieter moments that eventually impressed me most. Many of Rift Apart’s levels feature a stunning amount of activity that’s easy to overlook if you don’t stop and smell the roses. Again, we’re not talking about thriving cities packed with NPCs that follow their own schedules, but just check out the number of things happening in the average Rift Apart moment and then consider that all of those background actions are still happening when you’re in the middle of those aforementioned intense action sequences.

The game’s use of rifts is also fascinating from a visual perspective, if again sometimes quietly so. As we noted in our review, Rift Apart’s most ambitious uses of the rift mechanic are largely limited to somewhat scripted sequences. However, the way that the game uses rifts to zip you around a level or change the environment in an instant clearly showcases what the PS5 can do. They remind you that the biggest advantage of the PS5’s SSD is how it will raise our expectations for how “fast” a game can look and feel.

Whenever I’m talking about how technology can fundamentally change video game design in a way that benefits gameplay, I always reference 2006’s Dead Rising. While only a preview of what the Xbox 360 could do (and a sometimes janky preview at that), Dead Rising was one of those games that made us rethink what a game was capable of. You couldn’t see that many enemies on screen at once and not start dreaming of the possibilities.

Rift Apart isn’t quite as big of a revelation, but I will say it’s likely that Rift Apart will leave you feeling like other games are moving in slow motion. Some of the game’s accomplishments should absolutely be attributed to Insomniac’s skills, but the power of the PS5 is definitely allowing them to explore new ideas.

Heading into the PS5/Xbox Series X generation, people debated whether or not the move was to emphasize 4K/ray tracing gameplay or 60 FPS action. Both are theoretically possible to feature at the same time, but for the moment, most developers may have to choose between one or the other in order to ensure an ideal gameplay experience.

So far, we’ve seen some next-gen titles experiment with offering different performance mode options designed to emphasize either gameplay speed or visual details. While the results have been impressive so far (Insomniac’s Spider-Man: Miles Morales is actually one of the best examples of this concept I’ve seen), there’s still this sense that those options are still sometimes covering for previous-gen games that are being upgraded to next-gen consoles and can’t quite offer “everything” just yet.

At first, I was limited to Rift Apart’s Fidelity Mode (a 30 FPS option that emphasizes pure visuals), which was honestly not an ideal experience. The game looked good (especially in screenshots), but you really felt that framerate loss. I also experienced quite a bit of slowdown during heavy action sequences, although the game’s “Day One” patch seems to have addressed the most egregious examples of that issue.

Performance Mode was a little more interesting. That option sacrifices some visual flourishes to ensure consistent 60 FPS play. As you may imagine, that greatly enhances most action sections and some of the more intense platforming moments. At the very least, this is the option that will show even doubters that there’s a clear difference between 60 FPS gameplay and 30 FPS gameplay with more bells and whistles.

Performance RT mode ended up being what you could call the “Goldilocks” option. Essentially a middle-ground between the other two modes, that setting aims to offer both ray tracing and 60 FPS gameplay. In the process, you lose some of the visual details seen in Fidelity Mode and the FPS consistency you get from Performance Mode.

Much as it’s been with nearly every PS5 game that’s offered similar settings so far, I find myself gravitating towards Rift Apart’s performance-based options. While the game’s Fidelity Mode is impressive, this is a game that just feels so much better when it’s consistently running at 60 FPS. Rift Apart does a pretty good job of making an argument for the “Fidelity” experience, but it still seems like that option is mostly for photo mode fans or those who truly do not care about high FPS gameplay.

I ultimately parked the game in Performance Mode, but I do have to give a shoutout to the Performance RT option. It works better than the equivalent option offered in Miles Morales, and while I’m not convinced that the occasional ray tracing effect is worth making the PS5 work harder to maintain 60 FPS+ gameplay, it’s the closest I’ve come to seeing a PS5 game that offers the best of both worlds.

I mentioned the idea of Rift Apart’s photo mode viability earlier, which is really just another way of saying how good the game’s screenshots look. Simply put, if you were trying to sell someone on the PS5’s power and could only use one screenshot to do it, would you show them a picture of Rift Apart?

So far as that goes, I’d actually still recommend Demon’s Souls over Rift Apart if you were trying to showcase the power through images alone. Rift Apart certainly doesn’t look “bad” in photos, but as noted above, this is a game that showcases the benefits of its next-gen technology when you’re actually playing it. At a glance, I don’t know if Rift Apart’s character designs, textures, and more obvious visual details are quite as impressive as what we saw in Demon’s Souls.

That’s another argument “against” Rift Apart’s Fidelity setting. While Demon’s Souls’ slower style makes it a bit easier to argue for playing the game at 30 FPS (even if I’d still recommend that game’s performance setting). Rift Apart practically demands as many frames per second as possible in order to properly convey the things it does so well.

Having said all of that, Rift Apart is obviously a beautiful game, and its robust photo mode options make it pretty easy to grab some beautiful pictures. In fact, taking the time to explore Rift Apart‘s photo mode is one of the best ways to appreciate some of Fidelity’s more impressive visual effects. You don’t really notice things like the reflections in a character’s eyes while you’re trying to survive another battle, but it’s hard not to be impressed with those kinds of details when you’re able to take the time to construct a perfect snapshot.

In a way, it’s not really a fair argument. Rift Apart is the first triple-A PS5 exclusive created by a first-party studio that isn’t based on an existing game. I know that’s a lot of qualifiers, but that’s really just another way of saying that there’s a reason that some consider this the first “true” PS5 exclusive. As such, Rift Apart looks as good as you’d expect a game to look.

Yet, it’s the way that Rift Apart feels and plays that really sets it apart. If the best thing that upgrades in video game technology can do is open up new design possibilities, then it’s really a testament to what Rift Apart does so well that its most impressive technological accomplishments reveal themselves while you’re playing the game rather than just looking at it.

What Insomniac has accomplished with the PS5 this early into the console’s run shouldn’t be overlooked, but if nothing else, the lasting beauty of this game may just be the way it so clearly showcases a path forward that the next round of PS5 exclusives will hopefully be able to follow.