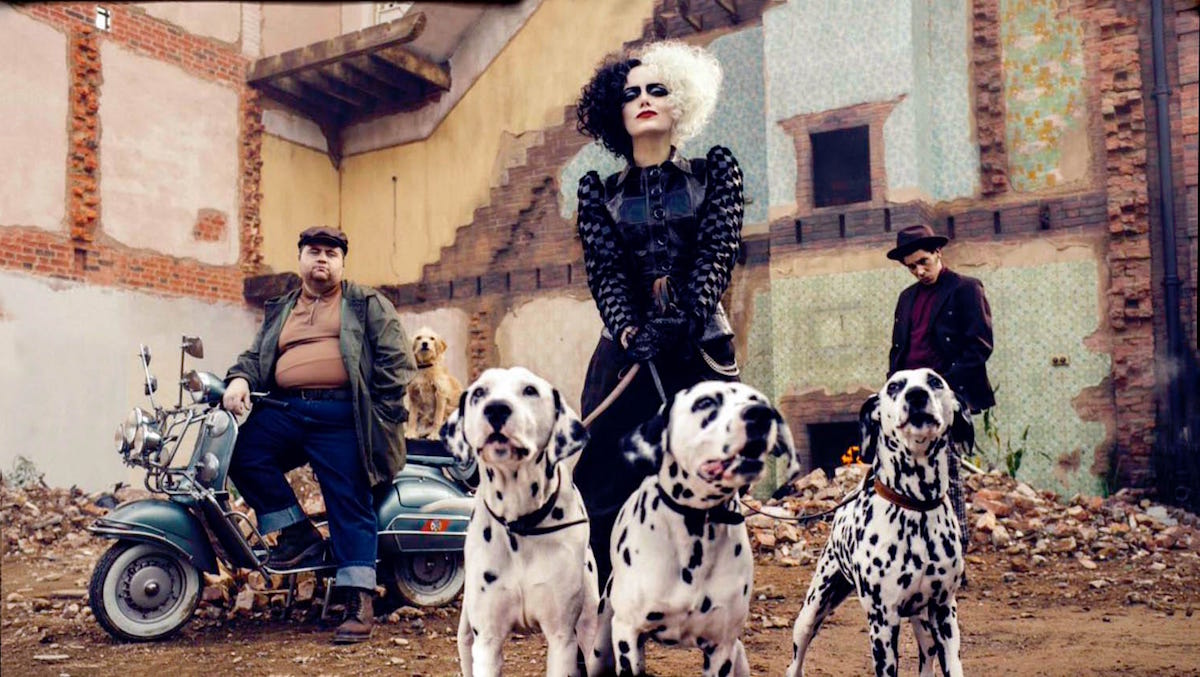 Cruella was a vibrant, funny, and raucous ride which saw scrappy young seamstress and designer Estella go head to head with snooty fashion high priestess, and all round bad person, The Baroness in a funky, punky, spiky take on the protege outdoing the mentor trope. Emma Stone and Emma Thompson fizz and spark as the warring fashionistas, the outfits are fabulous, and the soundtrack is banging.

Oh yeah, and at some point in the future, the plucky, if slightly deranged, upstart you’ve been rooting for the whole time is going to become a puppy murderer. But shhhh, try not to think about that too much.

While Cruella was generally well received, there’s a definite disconnect between the Cruella de Vil we get at the end of the movie and the fur-crazed demon we meet in 101 Dalmatians, and now that news has arrived that Disney is already working on a Cruella 2, consideration is no doubt being put into how that gap might be bridged.

The key could be in flipping our understanding of exactly who, or indeed what, Cruella is.

The short version. What if 101 Dalmatians-Cruella isn’t actually the designer formerly known as Estella at all? What if someone else were to take on the Cruella brand? Bear with us and we’ll show our working.

Though we have at least one more movie before we get into 101 Dalmatians territory, Emma Stone’s Cruella is way too young.

At the end of Cruella, we see in a mid-credits scene that Cruella has sent a Dalmatian puppy to her school friend Anita (Kirby Howell-Baptiste) and one to the Baroness’ former lawyer Roger (Kayvan Novak). These dogs, we are told, are Pongo and Perdita, and we assume they are the two that will meet when they are grown, and like their owners, fall in love.

Estella was 12 in 1964, and we understand that the main events of Cruella begin 10 years later, making grown up Estella 22 when her adult adventures begin. Even if the movie takes place over a number of years, the character is almost certainly still in her early 20s by the time the film ends.

Dalmatians on average live for 10-13 years. So even if Pongo and Perdita are relatively mature dogs when they have their litter, 101 Dalmatians Cruella is only going to be in her 30s—a lot younger than the de Vil we are used to in animation. And if nothing else, Emma Stone is currently 32 and isn’t suddenly going to be in her 40s or 50s by the time Cruella 2 begins filming.

Now, okay, Disney is allowed to change the ages of its heroes and villains if it wishes, but it feels like a stretch to make her that much younger if the studio is trying to please fans of the animated cartoon or, indeed, the previous live-action version where Glenn Close was in her late 40s when she took on the role for the 1996 film.

While pure villain origin stories can certainly work, Disney tends to opt for a retelling which suggests the villain is not as bad as you think they are. Maleficent is the most obvious recent example which paints Sleeping Beauty’s bad fairy as a wronged woman who regrets her decision to curse Aurora and who ultimately saves her.  Similarly,The Wizard Of Oz retelling musical, Wicked, gives the Wicked Witch of the West a sympathetic backstory, opting for the ‘she was nice all along, it was just propaganda’ approach. It even gives the character a happy ending.

It’s hard to see how this would actually work in Cruella’s case. Although Estella’s mum was (sort of) killed by Dalmatians, the logic that this would make her a puppy killer doesn’t land. Not to mention the fact that 1. Estella has a beloved dog of her own, and 2. Ultimately gets on just fine with the Baroness’ Dalmatians.

So unless the plan is to retell 101 Dalmatians so that Cruella’s puppy killing intentions are a misunderstanding or similar (which is really going to take the joy out of a 101 Dalmatians remake) then one other option would be to go ‘full Joker.’

Yep, beaten down by the Thatcherite years in Britain, Cruella loses her job and becomes depressed and disenfranchised. With inadequate access to mental health care and railing against the inequalities of the world, she decides to take matters into her own hands and… make herself a really fancy coat.

We joke. But a Cruella 2 in which our loveable (anti-)hero ACTUALLY becomes a full on monster sounds, well, it sounds about as depressing as Joker was. Which is not going to be a good look for Disney.

Who is Cruella, really…?

There’s another option. Cruella is the name embraced by Estella when she launches her fashion label. Cruella becomes a mysterious icon—no one really knows who she is. And when it appears that the Baroness has thrown poor Estella to her death, Cruella truly comes into her own, thanks to the inheritance her dear friend Estella has left to her. RIP Estella, long live Cruella…

If Estella can become Cruella—an entirely constructed persona—what’s to say someone else couldn’t steal that persona? Someone like the Baroness, perhaps?

Say yes to the Baroness

At the end of the movie, Cruella has framed the Baroness for the murder of Estella (even though she’s not dead) as retribution for the actual murder of Estella’s adoptive mother. The Baroness is Estella’s biological mother, but she gave the child up at birth with the intent that Estella be killed. While Cruella and her mother the Baroness have a great deal in common—they are both brilliant, ostentatious, a little bit ruthless, quick-witted and of course, fabulous—the one major thing they do not have in common is that the Baroness is a murderer.

She has murdered at least one person but the implication in the film is that it’s probably significantly more, and indeed she even attempts to kill Cruella, her own daughter. Twice. Much as Cruella fears that she’s like her birth mother, in this respect she is not—the mother that brought her up and the wonderful friends she’s made, Jasper, Horace, and Artie, have kept her on the straight(-ish) and narrow(-ish).

The Baroness is in prison but has vowed her revenge. The Baroness knows Cruella’s true identity. The Baroness is the only other designer anywhere near as good as Cruella. And it is entirely easy to believe that the Baroness would have it in her to kill a puppy or 10.

If ‘Cruella’ is a brand as much as an identity, it would make sense for Cruella 2 to see the Baroness escape prison and somehow steal Cruella’s identity as well as Hell Hall, perhaps discrediting Estella’s alter-ego along the way.

Unlike our current Cruella, she would be a formidable villain for a 101 Dalmatians remake, particularly if she emerges from prison half-crazed and bent on revenge. Then we can keep our cool, rebel, punk fashionista Cruella and have our deranged dog-bother to boot.