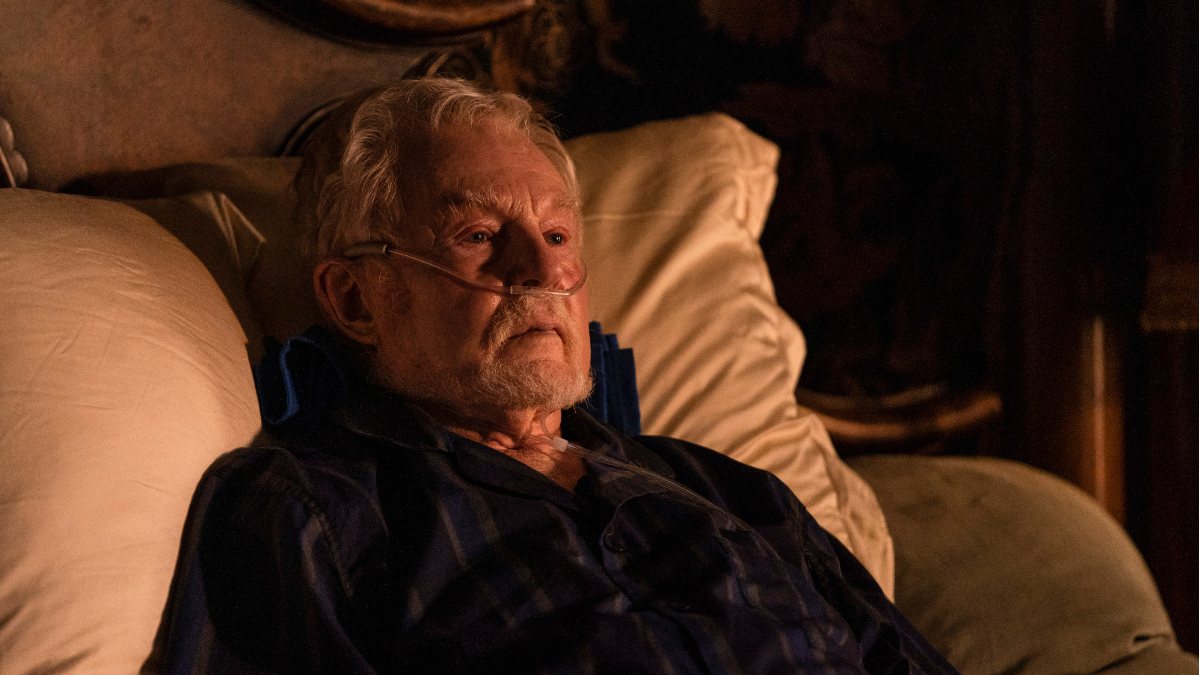 Warning: this Inside No. 9 review contains spoilers.

Having met his servants in ‘The Trial of Elizabeth Gadge’ and ‘The Harrowing’, it was only a matter of time before Old Scratch turned up on Inside No. 9. This series has always had one cloven hoof dipped in the fantasy-horror genre (‘Séance Time’, ‘Tempting Fate’, ‘Dead Line’, ‘Death Be Not Proud’, ‘The Stakeout’), so it’s ripe for a visit from the devil himself.

‘How Do You Plead?’ was a choice vehicle, both for the character, and for Sir Derek Jacobi, whose guest performance was perhaps the best this show has had. (His second, after providing the film director voiceover for series three’s 1970s pastiche ‘The Devil of Christmas’). Here, Jacobi played Mr Webster, a dying barrister whose term was about to expire on the Faustian contract he’d signed in 1972. Reece Shearsmith played his kindly nurse with the unusual name of Urban Bedford, whose soul Webster attempted to sacrifice in his stead.

Speaking of names, though the full title of Jacobi’s character was never spoken, his initial ‘D’ must have stood for Daniel, as in the 19th-century US statesman who appeared as a character in the 1941 film The Devil and Daniel Webster, adapted from a short story by Stephen Benét. That was also about a famed lawyer who argued his way out of a contract with the devil, but unlike Inside No. 9’s Webster, he was the hero who did so on behalf of a poor farmer and successfully kicked the devil out.

This Daniel Webster was no hero. Nonetheless, Jacobi lent him moments of pathos. He may have been a lying shit, but you still felt his genuine fear of hell. On a first watch, the relationship between this irascible dying man and the patient nurse who put up with all his bluster to care for him was briefly poignant. Webster’s gratitude for Bedford’s goodness was moving. After his treacherous intention became clear, you realised the selfish source of that gratitude, yet it still felt real. That’s what you get with this calibre of guest star.

As ever with Inside No. 9, the script kept sneakily telling us the truth while playing out the lie. Six minutes in, Bedford admitted that he wasn’t really a kind soul. “It’s just a front. I just do nice things to balance it out.” Minutes later in that trial roleplay, Webster showed himself to be a mendacious actor with no moral conscience, willing to say anything to get his desired result. He used to play his lies for all they were worth and dazzle the jury with fireworks, he said – exactly as we were watching him do now.

There were other clues in the script. Even in its everyday Alan Bennett-ness, images of the occult, infernal and celestial were everywhere. In the lift up to floor number nine, Bedford told Steve Pemberton’s lift attendant he’d been “summoned”. Webster protests at the “prolonged torture” of his treatment and is “burning alive” (and was told in return he should have “read the small print”). Nods to God, angels, saints, souls and goodness were throughout, as highlighted by Pemberton with his “I told you earlier, you’re a better man than me.”

He wasn’t, Bedford said. His character though, was so softened by his kindness, campiness and comedic references to Cats (Mephistopheles/Mr Mistoffelees. Brilliant), “Mr Mozart” and Hetty Wainthrop that it was hard to accept his secret past as a murderous bully. To suit the game the episode was playing, nothing had hinted at a repressed darkness in him, only that he was traumatised by the Carl Jackson episode, which must have been his Damascene moment. Despite the confession to murder, he remained sympathetic, so much so that the devil’s final promise that Urban would be seeing Mr Webster again, i.e., in hell, felt unjust.

Bedford’s trauma gave us what might be – correct me if I’m wrong – Inside No. 9’s first ever dream sequence? A nightmare sequence, more properly, from director Guillem Morales who pushed all the right buttons to build an effective horror atmosphere. By placing a birthday balloon in that chair in the exact position of Carl Jackson’s head to draw a link between the dream and ‘reality’, there was even the playful hint that the nightmare had never ended.

It’s details like that, in the script, in the performances, in the sets, in Christian Henson’s music (which did so much work this episode, seguing at one point from Bedford’s tinny phone to the ambient score without even seeming to cut), even in the on-screen title that did a tiny bounce along with the lift landing on floor nine, that prove what a special creation this show is. Yes, misery might let you win a Bafta, but so, it turns out, does love. Congratulations Inside No. 9.

Inside No. 9 series six concludes next Monday the 14th of June at 9.30pm on BBC Two.