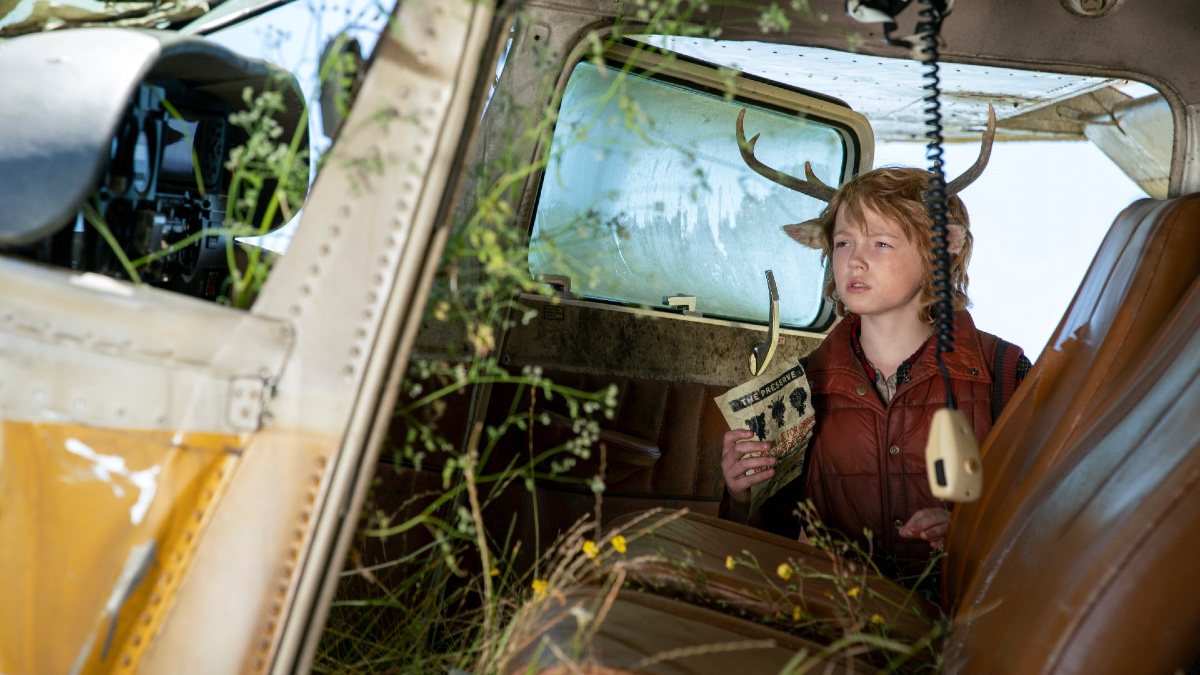 This article contains spoilers for Sweet Tooth, both the TV series and the comic.

Sweet Tooth, the live-action adaptation of Jeff Lemire’s post-apocalyptic comic, has now arrived on Netflix and it’s a hit! Or at least that’s what producer Robert Downey Jr. ‘s overwhelmingly prevalent promoted tweet claims. I can recite “#SweetTooth is now certified fresh with a perfect 100% critics score. So incredibly proud of the whole @sweettooth team and can’t wait for you to see ‘the show of the summer.’ All episodes are now streaming on Netflix!” more readily than my own name at this point.

Still, it’s easy to see why Sweet Tooth found an audience on Netflix. The story of a gentle deer-boy hybrid named Gus and his quest to find his mother in a virus-ravaged world puts a refreshingly optimistic face on a well-worn post-apocalypse genre. Actor Christian Convery is a real find as Gus a.k.a. Sweet Tooth and the series eight episodes feel like an ‘80s Amblin Entertainment homage done right.

Sweet Tooth is so inherently sweet that audiences might not realize just how much it deviates from its comic inspiration. Lemire’s comic miniseries, published from 2009 through 2013 by DC’s Vertigo imprint, has many fans, including some big pop culture names. Actor Michael Sheen wrote the foreword for the series first collected trade paperback. TV writer Damon Lindelof (Watchmen, Lost) conducted an interview with Lemire for the end of the final book. The comic is also decidedly less sweet than the TV show it inspired.

Arriving in an era before apocalypse fatigue fully set in for pop culture, Sweet Tooth really leans into the Mad Max side of its “Bambi Meets Mad Max” elevator pitch. The book is quite dark and unflinching. That Netflix and series creator Jim Mickle decided to go in a brighter direction for the show is an interesting commentary on entertainment’s priorities at the moment. But what if Sweet Tooth the TV series decided to hew closer to its source material? Read on to see how the comic and the show differ.

It cannot be overstated just how much darker the Sweet Tooth comic is than the TV series. The show acknowledges that the post-apocalyptic world after “The Sick” would feature some inherent violence. In fact, the whole plot of the show involves hunters trying to kidnap a child and deliver him to the military to be ground up into medicine essentially. That’s obviously dark. But the show still does its best to avoid as much onscreen violence as possible.

When the Big Man or another character rescues Gus from hunters, he does so in a largely bloodless fashion. Even when Big Man takes a bear trap to a poacher’s head, audiences are spared the grisly sights and sounds of it. Readers of the Sweet Tooth comic, however, are spared nothing. The pages of Lemire’s work are positively drenched in blood. Midway through the story, Gus is even forced to beat a fellow hybrid’s brains in with a brick. He says he feels bad about it, but not that bad.

The comic also delves into the realm of sexual violence as many post-apocalyptic stories have felt compelled to do before. Early on in the proceedings Big Man and Gus come across a town where a family captures women and forces them into prostitution. When Big Man rescues two women, they become permanent fixtures of their party. These characters, Lucy and Becky, do not appear in the TV show (though one character does borrow her name from one).

If all the violence didn’t already make it apparent, the Sweet Tooth comic is particularly misanthropic. Nearly all of the human characters in the comic are monsters. Even Gus’s beloved Big Man Jepperd is useful because he’s a monster. Jepperd never loses sight of what makes him useful in this world, which is killing. He only becomes a hero when he applies that skill to those who deserve it. Throughout the series run, the comic continually intimates that perhaps planet Earth would be better off without all these humans anyway.

Befitting the comic’s darker tone, the characters of Sweet Tooth are also quite a bit darker. While Convery’s depiction of Gus in the show is absolutely pitch perfect for a young Spielbergian hero, the Gus of the comic isn’t quite as self-assured or sophisticated. The education that Gus received from his “pubba” wasn’t necessarily top notch stuff so his vernacular is filled with more slang and abbreviations. He comes across as a true Nebraskan country boy.

Meanwhile, Tommy Jepperds a.k.a Big Man (Nonso Anozie) gets an even bigger makeover for the show. Lemire describes the Jepperds of the comic as being inspired by the concept of an aging Frank Castle. There is absolutely no warmth in the comic’s Big Man. Instead of being an ex-football player, he’s an ex hockey player…and a pretty terrible one at that, only useful as his team’s “enforcer”. Anozie’s Jepperds is quite a bit more personable and open. Though he intends to sell Gus to the Last Men, he never goes through with it. In the comic, Jepperds does exactly that before changing his mind and rescuing the boy.

The pig-girl hybrid Wendy (Naledi Murray) exists in the comic but her mother Aimee (Dania Ramirez) does not. Instead Gus meets Wendy at the Last Men facility after Jepperds sells him off. He meets Wendy’s little buddy Bobby there too.

Gus’s “pubba” is a janitor at a medical facility in both the comic and the show, but as played by Will Forte in the show, he’s a lot more tender and smooth. The show Pubba is the perfect father to young Gus, open, communicative, and knowledgeable. In the comic, however, the character has lost some of his mental faculties in isolation. He is a God-fearing man who entertains and writes down his apocalyptic visions. Gus loves him and he loves Gus but he’s also not operating at full capacity. Also not operating at full capacity is Dr. Adityah Singh (Adeel Akhtar), who becomes inspired by Pubba’s writings and believes that Gus is a new god.

The Animal Army is quite different in the comic. Instead of being a ragtag gang of Neverland-style kids, it’s a disturbing cult of adults in animal masks, led by a deranged man who has five dog-hybrid children. Becky a.k.a Bear (Stefania LaVie Owen) is an invention for the show but she does take her name from a comic character.

General Abbott though? He’s pretty much that villainous in both iterations of the story. Screw that guy.

Though Sweet Tooth’s first season begins and ends in a similar spot to the first “Book” (12 issues) of the comic, the path it takes to get there is wildly different.

Scenes at Aimee’s Preserve and at Dr. Singh’s Stepford-ian community are invented entirely for the show. The Preserve is mentioned in the comic, but it’s never confirmed to exist (and likely does not, given the comic’s relentlessly dark tone). The first time Gus and readers meet Wendy and Dr. Singh is at the Last Men facility where Gus finds himself in the final episode of the season. Also new to the TV series are Gus and Big Man’s side quest through an outdoor sporting goods store, and the entire Animal Army’s arc.

In the comic, Gus, Big Man, and company’s journey stretches from Nebraska to Alaska (hey, that rhymes!). The show elects to shorten that a bit by having Gus venture from Wyoming to Colorado. In addition to introducing new stories, the show also abandons some comic stories entirely, likely in pursuit of its cheerier tone.

Netflix has not announced Sweet Tooth season 2 yet. Based on the show’s apparent success, however, future seasons seem likely. When they arrive, they will undoubtedly have many more changes to make from the source material to ensure an appropriately sweet viewing experience.

Sweet Tooth is available to stream on Netflix now.

Halo Infinite: Who Is the New Cortana-Like AI?
Ratchet & Clank: Rift Apart Weapons and How to Unlock Them
Loki: Is the TVA The Most Powerful Entity in the MCU?
Jurassic World: Dominion Footage Travels 65 Million Years Into the Past
Teen Titans Go! – “The Spice Game” (clip)