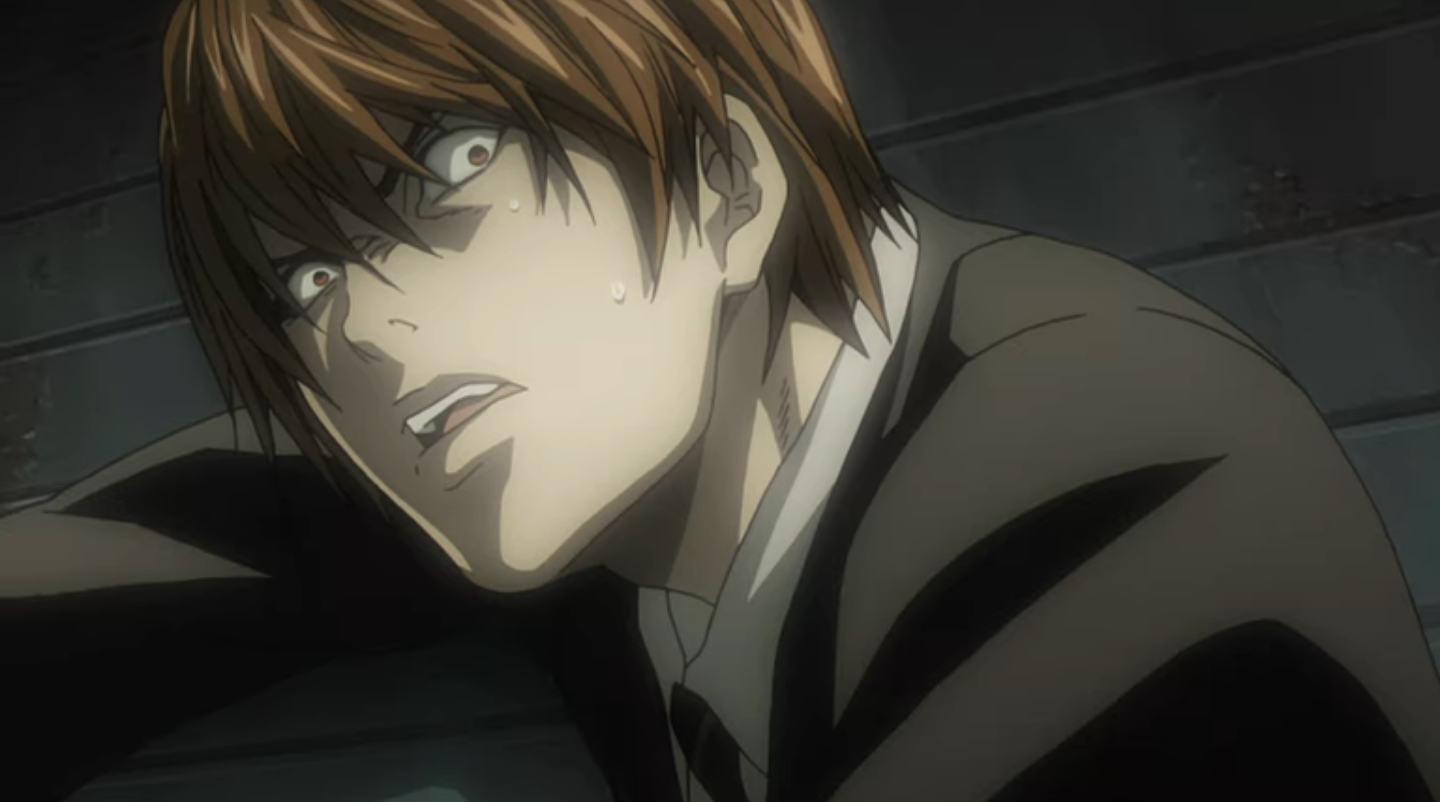 This article contains major spoilers for both the manga and anime of Death Note.

There’d never been a manga (and later anime) quite like Death Note. A psychological thriller mixed with the supernatural, the series followed high schooler Light Yagami, who’s given a notebook with the ability to kill anyone whose name is written in it. The premise alone is incredibly enticing but it was the way Death Note evolved that made it a beloved and still talked about series to this day.

The funny yet dark interplay between Light and the Shinigami who gave him the notebook, Ryuk. The way Light was able to creatively use the notebook to kill. The absolutely bonkers ways he avoided getting caught, most famous of which utilized a bag of chips. Being forced to work with the frustrating yet tragic Misa. The absolute triumph of an episode where Light simply takes a walk with someone and desperately tries to figure out their name in order to avoid getting caught.

The series’ biggest draw, especially after it got started, however, was the mind game between Light and police consultant L, who had a strong suspicion of Light being the killer. Their back and forth, Light avoiding being exposed, L planting traps for Light to fall into, the friendship that may not have been for show on L’s side, earned the series much of its acclaim.

However, half way through the series, L was killed off. It was a major shock, the biggest twist yet. This changed everything. Who else could compare to the man who nearly exposed Light time after time? Was this the end of the story? Would it be possible to create a character not only beloved as L but also one that could keep the tension of the story as high as it had been?

For most fans, the series never recovered after this. Many jumped ship solely because L died. Others weren’t impressed with the attempts to replace L. The characters of Mello and Near had some potential but it was never properly utilized. Many of their attempts to apprehend Light fell flat in comparison to the first half.

This isn’t to say the second half doesn’t have some bright spots but it does drag in places and many fans gave up before the story ended. Which is a huge shame because the final story of Death Note, in particular the one that takes up the final episode of the anime, makes up for its entire second half. It pulls everything together for what is an immensely satisfying conclusion that makes a critical judgement call on everything Light had done up to that point.

By the time Death Note reaches this final episode, it seems as though nothing can touch Light. He’s killed millions of people. Yes, Near has turned some of his team against him (except the loveable idiot Matsuda), but Light is still in control. He has a man named Mikami killing for him, he avoids Near’s traps, kills Mello, and even boldly tells his team it’s okay for them to work with Near. However, Near manages to get Light to agree to their first in person meeting and the two, along with their respective team’s, meet up in a deserted warehouse. It’s there that the stage is set for the final episode.

Light has Near cornered. Near had made a plan to swap out Mikami’s notebook for a fake, but Light saw through that and, through a trademark Death Note convoluted plan, made it so Mikami actually had the real notebook hidden. He’s won. Mikami writes the name of everyone present besides Light. Light, his ego at an all time, desperately tries to hold back his laughter. He knows he’s won, that in moments everyone is going to die.

The final episode begins… and they don’t. Near had faked Light out and did manage to swap out Mikami’s notebook for a fake. Light is exposed… and finally brings to the forefront a core question the series had been asking but refused to give a definitive answer on, not even in the first half: Is Light justified in his actions?

Look, I love Death Note. It’s a really fun watch and, because it’s a piece of fiction, you don’t have to be totally disgusted by a guy murdering millions of people. The fact he uses a magic notebook to do it makes it a unique take on the thriller genre. The problem is a large chunk of the series is told from Light’s POV. He makes it clear he wants to kill criminals the police won’t. That killing criminals makes the world a better place. The fear of being killed by an unseen force deter others from committing crime.

This wouldn’t be an issue if the show made it clear from the jump that this is still wrong, but it actively plants seeds of narrative doubt that maybe the authorities shouldn’t even be trying to catch Light. His actions are extreme, sure, but aren’t they needed to make the world safer? It makes viewers or readers ask the question: Is Light committing mass murder making the world a better place?

This is a dangerous topic to play with. I’m all for using fiction to explore hard concepts but the show needed to come down hard on his actions. They couldn’t condone them; it would be the show telling its audience, “Hey, mass murder is legit!” Even if the show left Light’s action as ambiguous that also would have been a problem. It would leave too much wiggle room. Too much of a chance for Light’s actions to still be seen as viable. At first, it seems like this is exactly what the final episode is doing. After Light’s finally discovered as the serial killer he is, he goes into full ego mode. He declares himself god, the only hope for mankind and explains that because of his actions, “wars have stopped and global crime rates have been reduced by over 70 percent.”

Light doesn’t even frame this as an evil action he needed to take in order to make the world better. No, instead he sees himself as good! He tells everyone that someone has to do this… but no one would have gone as far as he did. The world needs him to fix it. He needs to keep killing. This could have been the show’s only statement on Light’s actions. That he had a point, flawed as it was. It would have been so easy to leave the door open, to make the series as edgy as possible and have Light be sympathetic right to the end.

In the most critical moment in all of Death Note, right after Light gives his big speech, Near shuts him down: “You’re just a murderer, Light Yagami. And this notebook is the deadliest weapon of mass murder in the history of mankind.”  He goes on to say that Light has confused himself with a god when in fact, “you’re nothing more than a crazy serial killer. That’s all you are. Nothing more and nothing less.”

Light is not justified in his actions. This is the concluding statement of Death Note. It’s ultimate answer to the question of Light being justified or not. It isn’t entertaining the idea of Light’s actions. Any reason the show has given you to sympathize with him goes out the window. He’s completely in the wrong.  There’s nothing noble about what he did. He’s a murderer and simply killing all criminals without any kind of oversight is wrong. He thought he was god for doing this but in the end that was what did him in.

Light’s fall from grace and ultimate rejection by the series is further driven home when Matsuda, the clown shoes of the series, shoots Light in the hand. Light tries to appeal to him but he refuses to listen, shooting Light four more times. He’s only prevented from killing Light by the other offers. Light manages to get up after this and run away and Near lets him. He knows Light is about to die. This was yet another moment the show could have tried to make you feel pity for Light. That yeah, he was wrong, but he at least had good intentions and isn’t it sad he’s about to die?

Nope. Ryuk comes along and writes Light’s name in his own notebook. Light has truly lost. Before Light dies though Ryuk reminds both Light and the audience of what Light said early on in the series when asked why he was passing judgment on others: He was bored. For all the grand posturing of being god and making the world a better place, this was all because Light was bored. He’s no hero. His philosophy shouldn’t be looked upon as something noble or horrible but necessary. He’s just a horrific person who dies alone.

Even the short manga sequel to Death Note drives home the point that Light was wrong. Another human, Minoru Tanaka, is given the Death Note years after Light’s death and Ryuk wonders if Light is considered one of the greats of history. Minoru explains that while some consider Light god, it’s actually taught in ethics classes that Light is evil. He was also taught in world history classes that Light was, “a mass-murdering terrorist, the worst in recent history.”

The story actively refuses to give Light’s actions any justifications. He was committing mass murder.  If the story had simply ended at the half waypoint, L’s death, it would have been deeply problematic. It wouldn’t have answered the question of whether Light was justified or not. It would have left open the idea that maybe he was, at least from the perspective of the narrative itself.

This is what makes the final episode so important. It not only answered that question of whether Light was justified, but also took a very hard and definitive stance against it. It refused to entertain any notion that Light was in the right and Death Note was all the better for it.