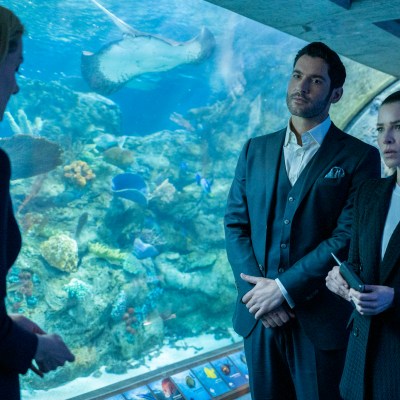 Lucifer does heartwarming and heart wrenching as well as any television series when the story requires it, but nothing adequately prepares us for the devastating news of Detective Daniel Espinoza’s death at the hands of mercenaries hired by Lucifer’s brother Michael. However, it’s the powerful, multi-layered narrative in the season’s penultimate episode that vaults “Is This Really How It’s Going To End?!” into rarified critical air leaving an impossibly high benchmark for others to aspire to. And, oh year, it appears the Book of Revelation may come true.

By its basic premise, the show’s writers turn the biblical story of the archangel Samael, aka Lucifer, on its head and weave an updated version that asks viewers to judge God’s most notorious angel through a different set of lenses. Now, as the show heads into its season finale, the stakes rise exponentially to a point at which it’s totally reasonable to broach the subject of an “end of days” apocalyptic scenario unfolding in present day Los Angeles. Chloe’s last case as a detective quickly takes a back seat to the news that Michael has orchestrated Dan’s death and now appears willing to do whatever it takes to replace his father.

Though many series seem to view episode titles as an afterthought with little care to meaning or relevance, such has never been the case with Lucifer. Nevertheless, “Is This Really How It’s Going To End?!” takes this responsibility to new heights, acknowledging the deeply rooted issues with which the characters struggle. Early on, Chloe wonders aloud what her role as God’s consultant will actually entail and whether she should pull Trixie out of school as a result, leading viewers to expect another episode rife with witty one-liners and Lucifer’s self-centered behavior. When the detective suggests walking away from police work, Lucifer and the audience understand the fragility of his campaign for the top job and silently worry Chloe may end up quitting the LAPD without a solid job offer waiting for her.

“I’m actually helping Lucifer take over the family business,” Chloe tells Ella who playfully punches Lucifer for taking her closest female friend away from her. Thinking the business is located down in the warm climate of Florida, Ella’s reaction simply adds to the playfulness of the scene, and we’re reminded that she’s still the only member of Team Lucifer that doesn’t know the truth. Is this really how Team Lucifer will fall apart? Wondering whether Miss Lopez will be able to forgive the others for being left out of the celestial loop appears to be the deepest concern at this point.

Ordinarily, the murder investigation merely serves as the vehicle through which the characters examine their issues and battle their personal demons, and while that’s true here to some extent, the insidious undertones of Michael’s plan to become God address the fundamental internal conflicts with which Lucifer continues to struggle. The Devil has “found God,” yet for all his desire to do the right thing in his pursuit of Chloe’s heart, he fails to understand the small human details which the detective puts clearly into focus for him. “If you don’t know by now how I feel about you, maybe you shouldn’t be God.” Is this how their relationship will end?

Given the dark turn the episode takes with Dan’s death, it’s easy to forget the solid comedic interchanges between Lucifer and his siblings as he lobbies for their support in the coming election. Miles Burris perfectly plays Jophiel as an empty-headed, party-monster bro, the antithesis of his sophisticated brother Lucifer. “Don’t see you as God material,” he tells Lucifer who gets off to a bad start in his quest to become God.

The later scene with his sister Saraqael (Ginifer King) not only gives Lucifer a chance to do what he does best but also sends a fairly powerful signal that something’s afoot here that has not yet made itself clear. She tells him point blank that he’s not getting her vote which leads him to channel his best John F. Kennedy – it’s “not what can the angels do for you, but what can you do for the angels.” The Devil does, after all, grant favors, and pulling out Top Chef’s Michael Voltaggio seems a low blow as Sara melts before our eyes. However, in a brief moment of clarity, she forces her brother’s hand when she asks him why he really wants to be God. Lucifer doesn’t provide a suitable answer, and it’s clear his campaign is rapidly falling apart. Is this how his push to become God will end?

In most cases personal breakthroughs lead the individual onto some sort of redemptive path, and when Lucifer confides to Zadkiel that he was wrong for leading the rebellion against their father, we’re momentarily thrown off balance. Is Lucifer being truthful? But as the Devil explains his journey, it’s immediately clear that he’s sincere when he tells his brother that he now has a better understanding of the difficulty of God’s job. He tries to seal the deal with the final swing vote he needs in the upcoming election by admitting the truth behind his desire to take his father’s place. “I am trying to be God so that I can finally be worthy of her.” Of course, Zadkiel knows exactly to whom Lucifer refers, and when he makes it clear that he’s doing this for love, it seems the balance may have finally shifted in Lucifer’s favor. It’s a wonderfully vulnerable view of the angel who used to run Hell.

Even though she’s got her own demons to slay, Mazikeen’s obsession with finding the perfect outfit for her role as Queen of Hell offers some telling insight into her true desires. Stepping comfortably into her role as therapist/friend, Linda tries to get the guilt ridden Maze to acknowledge the positive steps she’s taken during her time on Earth rather than obsess on her darker side. Yes, Maze can still rage with the best of them as we see in the scene with Lucifer and Michael’s mercenaries, but she’s either unable or unwilling to see the profound significance of the fact that she grew a soul against all odds. Is Maze incapable of accepting her dark side while at the same time acknowledging the good?

Whether these events mark the end of Chloe’s career as an LAPD detective, the end of her relationship with Lucifer, or the end of Lucifer’s crusade to become God, none of it prepares us for the fallout from Michael’s Machiavellian maneuvers. Now that he knows Heaven and Hell are indeed real, Dan struggles even more with his own mortality, and like Maze, he focuses on the bad things he’s done in his life rather than celebrate the overwhelming good for which he’s been responsible.

Dan’s execution at the hands of Michael’s hired killers sets into motion a series of events whose disparate situations force the actors into untouched arenas. Whether the hospital scene in which the doctor breaks the news to Lucifer, Chloe, and the gang, or the funeral at which Amenadiel speaks so eloquently about Dan and the man he was, it’s impossible to remain stoic in the face of so much emotional trauma. More importantly, it’s Amenadiel’s confession that he went to Heaven to see Dan only to learn he’s not there, that prompts Lucifer to reveal just how much he’s spiritually changed. Later, on the couch in Linda’s office, he finally makes his case for being God and finally understands he wanted to be God for all the wrong reasons.  “There are no words to convince me that the system isn’t broken. The system is not only broken, it’s unjust.”

When the former King of Hell admits that pain should not exist, we have to wonder how Lucifer will approach the coming conflict with his siblings and whether the apocalyptic prophecies of the Book of Revelation are destined to come true in contemporary Los Angeles. Could Dan’s death be part of God’s plan after all, and is it possible that he may not be in Hell after all? Can a celestial war that seems likely to affect all of mankind somehow be averted? “Is This Really How It’s Going To End?!”