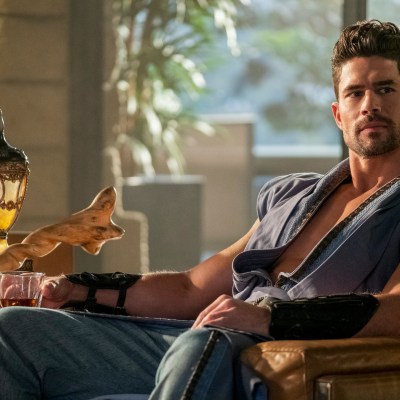 “Never loving anyone is far worse than loss.”

Heads up, humans, there’s a new God in town, and Lucifer fans couldn’t be happier. The near perfect season finale, “A Chance at a Happy Ending,” gives fans of the Netflix series some resolution regarding Lucifer and Chloe’s turbulent love story while at the same time setting up what might be the ultimate paradigm shift. Good triumphs over evil, the Devil sits on Heaven’s throne, and all’s right with the universe.

There’s no real crime to solve this time, but the spectacular crash of the prison bus in the opening scene subtly reminds viewers of Lucifer’s desert experience in the season two finale, and in the end, provides a source for the reinforcements Team Lucifer requires in the later confrontation with Michael and his angel army. Of course, the celestial battle for Heaven’s throne occupies the main thrust of the episode, but the individual, personal battles with which each character struggles receive sufficient attention and in some cases, even satisfactorily resolve themselves.

Make no mistake, however, God leaves his children to decide who will replace him, and Michael’s fear based approach to acquiring power plays nicely against his twin’s method which is grounded in desire. The opening exchange between the brothers deftly lays the groundwork for Chloe’s later role in taking down Michael. The writers provide a nice twist after Michael makes Lucifer an offer we know the Devil will refuse when he tells his brother that “Chloe will be down there with you.” Wait! What? Okay, you’ve got my attention. And while we understand the Lucifer premise significantly deviates from the familiar biblical account, it’s the shift toward guilt as the primary offense leading to divine damnation that creates a fascinating alternative.

Season 5B plays heavily on the emotional component, and “A Chance at a Happy Ending” cranks things up several more notches beginning with the scene in Dan’s apartment. While all the characters weather more than their fair share of misery and suffering, it’s Mazikeen who engenders the most empathy as she continues to battle her fear of abandonment and low self-esteem. It’s positively heart wrenching to watch Lesley-Ann Brandt’s riveting performance as Maze sobs uncontrollably while she, Linda, and Amenadiel pack Dan’s things. It’s clearly far more than Dan’s death that troubles her, and to see her naked vulnerability so frequently this season beautifully sets up her eventual reunion with Eve.

On the other end of the spectrum, Linda’s obsession with little Charlie’s intellectual development temporarily takes viewers away from the intensity of the celestial conflict. Amenadiel makes a nice connection between his son’s propensity for falling down and the human inclination to learn through failure, but the scene’s humor lies in Linda’s refusal to hear a word he’s saying. We know she already knows what he’s saying is true, and that’s what makes it so endearing.

Though there’s no lack of complexity among the characters, it’s difficult to ignore that Ella alone remains in the dark about the celestials’ true identities. During her moving conversation with God, she admits that “it’s extra dark right now,” and momentarily questions whether God is even listening to her prayers and pleas for guidance. Of course, the irony here is that her faith remains true despite the chaos in her life and the lives of those she loves. Perhaps in anticipation of the harrowing scenes to come, we hear Ella playfully tease the fact that she’s figured out the truth on her own, and we half expect her to reveal that the feather she’s placed under her microscope actually belonged to an angel. We’re fairly certain she hasn’t and won’t, and her assessment that Lucifer hit an emu with his car sits perfectly in the mix.

Nevertheless, it’s the angelic battle royale that drives the episode, and we know there are dark times ahead when Remiel turns up at the penthouse and collapses dead on the floor. The quest for control of the Flaming Sword continues when detective Decker notices the lack of burn marks on Remi’s fatal wound. They realize Michael’s bluffing about the sword, and we get a nice call back to an earlier episode and the necklace which comprises the final missing piece.

I’m still not a fan of employing identical twins as a narrative device, but Lucifer’s confrontation with Michael and TJ gives Chloe and Lucifer a chance to show off their teamwork, hinting at a full reconciliation when this conflict ends. However, it’s Lucifer’s concern for Chloe’s safety in the upcoming fight that allows Amenadiel to utter a line that on its surface appears a bit cheesy. Whether it’s DB Woodside’s heartfelt delivery or the context of the moment, his insight reminds us of one of the season’s more important themes. “You have to risk falling if you want to fly,” he tells Lucifer as the tension mounts over the detective’s perceived vulnerability against Michael and the other siblings. Perfectly timed, Mazikeen appears and hands Chloe a blade. “You can have stabby.” It’s just a wonderful scene because we know how much pain Maze endures and finds it so difficult to come to terms with her place in Lucifer’s world on Earth, in Hell, and potentially in Heaven.

There’s no better location than the Los Angeles Coliseum for the angelic throwdown, and the initial standoff between Michael’s formidable army and the three member Team Lucifer combines a sense of gladiatorial combat with a little West Side Story vibe thrown in for good measure. The plot twists keep on coming as Lucifer, Amenadiel, and Chloe stall for time, but it’s the electric entrance of Maze and Eve with their jump suited demon army that instantly alters the balance of power and gives hope that Maze might finally get the happy ending she craves and deserves. Melting down Maze’s demon blade to make angel killing bullets is simply classic.

Ordinarily, we’d be fairly certain that one of the show’s leads is not going to die with another full season still to be aired, but this is Lucifer, and the opportunity to shift the narrative to the afterlife inherently looms as a possibility. The well executed action sequence between Michael and the Flaming Sword and Lucifer and Zadkiel’s staff sets up the devastating conclusion to this brotherly squabble. Now broken in two pieces, the staff becomes a murder weapon, and it’s up to the dying Chloe to convince Lucifer he’s not responsible for her death. On the surface it seems she’s concerned that he won’t go to Heaven if he’s wracked with guilt over her death, but we know that he can’t go to Heaven as a result of the failed rebellion. Still, it sets up the first of several highly emotional scenes.

We know immediately that Chloe’s in Heaven with her father, and it’s a nice touch that they’re both approximately the same age, allowing a chance to connect on a fairly equal level. She’s clearly let go of any guilt she had regarding Dan’s death, but when Lucifer crashes to the ground and meets Lee, we’re momentarily thrown for a bit of a loop. Yes, that’s an awkward nod to Lee’s prior Hell loop. Lee’s sweater tips us off that this is not Hell which then begs the question – how does Lucifer successfully make it to Heaven? The twists keep coming yet feel natural and make perfect narrative sense. Lilith’s ring protects him but with a caveat – his time in Heaven is limited. Nevertheless, it’s Lee’s appearance that provides an opening for the happy ending we so desire for Lucifer and Chloe. Am I the only one surprised that there were no “happy ending” jokes in the episode?

It’s easy to feel empathy toward Lee each time he appears on Lucifer’s radar, but here, the small-time criminal not only helps the Devil find Chloe, but sends the message that even Lucifer can have a second chance at happiness. Is there something other than God’s banishment that keeps him out of Heaven? Is another hand calling the shots here, and if so, we know who that will likely turn out to be. Lucifer realizes the ring doesn’t have enough power to return both him and Chloe to Earth, and he makes his choice. “The world still needs you, Chloe Decker,” he tells her, making what he thinks is the ultimate sacrifice. We’ve waited a long time to hear Lucifer utter the words we’ve known he was capable of speaking and are not disappointed.

Back on Earth, the celestial war still rages, with one status change – Chloe’s alive and possesses physical powers she didn’t have before her brief stay in Heaven. It’s only fitting she beats the crap out of Michael, and just as it appears she’s willing to kill him, Lucifer flies to Earth to stop her. It’s a wonderful role reversal that allows Lucifer to put his stamp on how things will be moving forward. “Everyone deserves a second chance,” he tells his twin after severing his wings rather than his head. But what makes this magnificent scene even greater than the sum of its parts is Lucifer’s delayed reaction to what’s just transpired.

Arguably the series’ most poignant scene gradually unfolds as the enormity of the situation strikes Lucifer and the celestials. Even he doesn’t understand how it happened, but it seems pretty clear that the Devil has made a 360 and holds the Flaming Sword aloft as the others acknowledge his new standing by bending the knee before him. The highly emotional scene puts an exclamation point on an outcome that once appears all but impossible.

There’s no word yet regarding a return date for its sixth and final season, but Lucifer already exists as a television anomaly. Not many series get cancelled by one network only to be given a second chance, and the graphic novel based drama continues to defy the odds on so many levels. Looking back it’s clear that “A Chance at a Happy Ending” brilliantly closes one chapter of Lucifer’s journey while forging a path for unexplored narrative territory. The Devil becomes God. Now what?