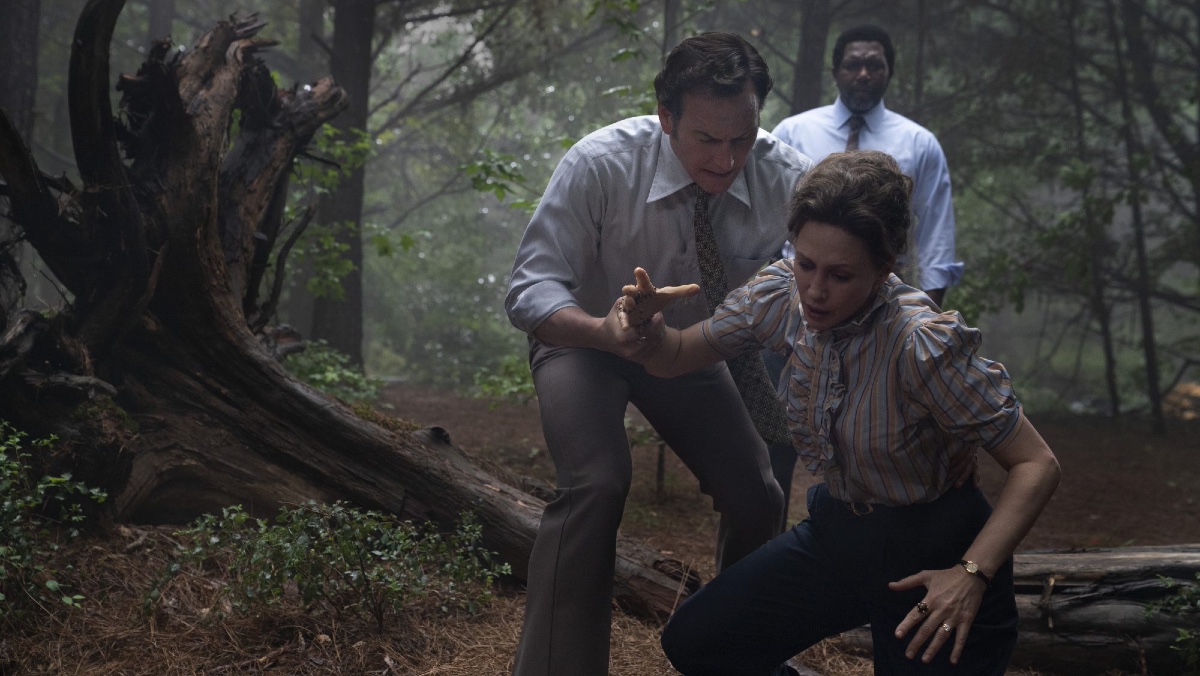 “Based on a true story” is the hook that the Conjuring universe was built on. A franchise where the main entries feature events from the case files of real life paranormal investigating couple Ed and Lorraine Warren (Patrick Wilson and Vera Farmiga) it’s a good gimmick that has served the series well so far – if you want to believe the Perron family were haunted by a ghost witch and that there was a poltergeist in North London in the 1970s, have at it. If not, you’ve still got a fun film with two likeable leads and plenty of good jumps.

The Conjuring: The Devil Made Me Do It treads thornier ground. Billed as the Warrens’ darkest case yet, it’s the story of Arne Johnson, a young man who murdered his landlord and claimed he was possessed by a demon at the time. A true crime version of this could make for a fascinating watch, but despite glimpses of courtroom scenes in the trailer, the legal precedent is not the angle The Conjuring 3 takes – and it’s probably for the best. Instead this is an outlandish tale of witchcraft and devil worship, of cults and curses which eschews the haunted house subgenre of the previous two Conjuring films and takes us fully into Satanic Panic territory.

Set in 1981, The Conjuring: The Devil Made Me Do It begins with an extend pre-credits sequence, with a young boy called David Glatzel (Julian Hilliard) being exorcised by a priest, while the Warrens and Glatzel’s family, including his sister’s boyfriend Arne Johnson (Ruairi O’Connor) look on. David is literally climbing the walls – there’s no ambiguity here – and by the time the title card lands, Arne has taken on David’s demon and Ed is in the hospital recovering from a heart attack.

Tragedy is imminent, and when it soon strikes, Ed and Lorraine must adopt a new role – that of pseudo detectives trying to unpick exactly what this demon’s deal is. With the exception of the bookends, and despite the “based on a true story” selling point most of The Conjuring: The Devil Made Do It actually isn’t actually true, which gives the film room to expand to its full bonkers potential, without giving too much mind to the fact that a real person died. Indeed the name of the victim and some of the details of the murder have even been changed and the movie doesn’t dwell for a second on who he was or what his death meant – which is probably wise though, since there’s something jarring here about cashing in on a tragedy.

James Wan who directed the previous two installments has stepped back this time – though he still co-wrote and produced – handing the reins to Michael Chaves who made his first foray into the Conjuring universe with The Curse of La Llorona. While Wan’s movies were all shadowy suspense, Chaves goes more for action, putting the Warrens – particularly Lorraine – through their paces (she even gets an actual “hold my handbag” moment) as they get caught up in solving a related murder case with a local cop. There’s humor here too, which is a new (and welcome) touch, as well an emphasis on Ed and Lorraine’s romance (less welcome). Chaves almost reinvents the couple as the paranormal equivalent of buddy cops – exchanging quips, solving crimes, hunting down occultists, and nearly falling off cliffs, with the film’s frantic climax taking place inside catacombs.

It’s fun and there are some decent jump scares though these tend to err on the side of basic – The Devil Made Me Do It doesn’t carry the sense of dread of the first two Conjuring movies although it contains considerably more actual death. As a straight up demonic horror it’s fluffy but fun, and fans of the Warrens as characters get a bit more back story, an extra glimpse in the artefact room and at least one meaty call back to previous Conjuring universe movies (no spoilers). It’s the weakest of the three main films but an improvement on La Llorona and despite having a rather stretched run time at 112 mins (the same as The Conjuring, but shorter than The Conjuring 2, thank goodness) it’s zippy and action-packed enough to keep you on your toes.

Though it ends with text relating to the outcome of the Johnson case this is really something of an afterthought. You’ll get a better account of what actually happened in that case by reading Wikipedia, including hints that not everyone was as convinced as the Warrens that the murder was the result of a demonic possession (that defense was rejected by the judge).

“Based on a true story” is a bit of a cheat then, but for a mostly fictitious, glossy genre ride with some decent moments of body horror and classy leads front and centre, The Conjuring: The Devil Made Me Do It is a worthy addition to the Warrens’ playbook.

The Conjuring: The Devil Made Me Do It is out now in UK cinemas and premieres in US theaters and on HBO Max on June 4.