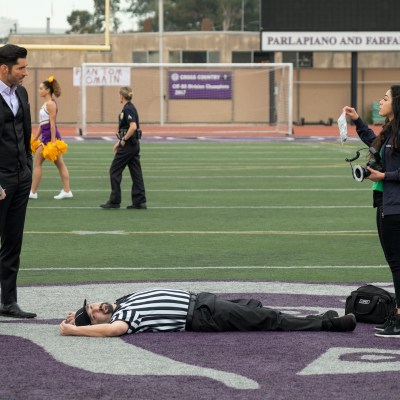 “Don’t mysterious ways me; you just exploded a man.”

Grammar faux pas aside, Joan Osborne’s 1995 release raises a philosophical question that to this point has gleaned no satisfactory answer – “What if God was one of us?” I’m not sure we’ve gained much meaningful insight to this question, but Lucifer has a lot of fun exploring that scenario while at the same time addressing much of the pain with which so many of the characters continue to struggle. “Resting Devil Face” takes a multi-layered approach to examine the  emotional cost inherent in most parent/child relationships even when God happens to be your dad.

Though the primary relationship schism exists between Lucifer and his Father, a significant amount of soul searching takes place in “Resting Devil Face.” There always seems to be that one heart rending moment that sets Lucifer apart from the standard, episodic fantasy fare, and here, it’s the exchange that takes place between God and Mazikeen after she fails to carry through her attempt to murder Him. Maze sees herself as the other, and finds God’s declaration that she’s perfect as is, to be nothing more than a denial of what she sees as her truth. She desperately states that “a demon can’t grow a soul,” which is at the core of her self-loathing, but God’s response is both beautifully brief and spiritually awakening. “Can’t she?” And it’s at that moment the audience and Mazikeen recognize she had it in her the entire time, and her decision to not kill God provides enough proof to send her on a path toward psychological healing.

Those believers who insist on a strictly literal biblical interpretation may find fault with the narrative approach of making God appear fallible, but in doing so, they’d be missing the point of this unique allegorical approach. First of all, God makes the decision to hide His powers in baby Charlie’s rattle so that He can experience what it means to really be human, and to a certain extent what it means to be a celestial on Earth. Most importantly it gives him insight into Lucifer’s angst, and to a lesser extent that of Amenadiel’s as well. From the hilarious opening scene in which the brothers plan to confront their father about his need to return home, it’s clear the writers are at the top of their game. They find him at Lux in plumber’s attire attempting to fix a problem that may or may not actually exist, but it’s unclear whether Lucifer’s insistence he rest is because he’s having memory issues or because he wants to get him back in Heaven as quickly as possible. “It must be the seventh day somewhere,” Lucifer posits, making a witty, universal allusion that partiers everywhere understand.

The fun doesn’t end at Lux, however, Dear Old Dad shows up at the crime scene which features the murder of former boxing champion Albert “Almighty” Walcott, and a frustrated Chloe even asks God for the identity of the killer. “For once I don’t know,” he tells her, and it’s clear even he’s pleased with himself. Back at the precinct God experiences one of life’s inconsistencies when he encounters “brain freeze” while enjoying a tasty frozen treat. But it’s His inexperience at the undercover sting operation that nearly brings about the 1960’s anthem “God is Dead” as he blurts out the fact that Lucifer works for the police. Of course, the surprise here occurs when The Colonel punches God in the face prompting Lucifer to come to his Father’s aid. “No one lays hands on my Father,” he declares to more than just the drug dealers.

Has Lucifer reached a turning point in the quest to make peace with his Dad? He may not realize it, but it’s sure become clear to us. Back at the penthouse, Trixie’s unexpected appearance sets the stage for the lovely scene she has with Lucifer’s father at the train station. The two adorably sit and eat the sandwiches she’s packed while discussing what it is that’s really at play here. She admits she’s mad at Lucifer for leaving (his trip to “Florida” aka Hell) but it’s her mother’s sadness that strikes a nerve. The scene’s complexity expands when an eavesdropping Maze stands down from her plot to kill God. Is it God’s admission to Trixie that he’s made mistakes with Lucifer or the fading innocence of the young girl with whom she’s always been able to connect that stops Maze in her tracks?

Nevertheless, at the heart of “Resting Devil Face” is the acknowledgement that others can only know how we feel if we tell them, and while God may be omniscient, even He may have trouble getting inside the heads of His children. Naturally, Lucifer extends that metaphor to include the human members of Team Lucifer, and the hope here is that Chloe and Lucifer will be able to overcome the obstacles that presently keep them emotionally distant. All of this crystallizes in the tender moment between mother and daughter as Chloe recognizes her baby girl is growing more quickly than she realized. “I can tell you’re sad, mom,” Trixie admits, leading Chloe to acknowledge she needs to open up to Lucifer about her real feelings. I’m fairly certain she’s already done this, but perhaps she plans a new point of attack.

And in a series of narrative bombshells, God’s announcement that he plans to retire opens a wealth of narrative possibilities. Okay, but what exactly does that even mean? God’s been dropping hints since he turned up on Earth, and the memory issues he confesses to, seem to imply that His intellectual capacities have become compromised. Is that even possible? I mean, he’s the Supreme Being. Is this new development intended to be a metaphoric slap at a world that continues to abandon a belief in a higher power?  Is God giving up? Seems unlikely.

So what’s going on here? From a storytelling standpoint, could it be that God plans to simply step aside and name a successor who will continue the work he’s done since the beginning of time? And if so, who does he have in mind? Of course, the delicious irony that Lucifer follows in his Father’s footsteps leaps to the forefront, but it also seems unlikely that Amenadiel would agree to the wisdom of such a move. On the surface these developments may seem to be a commentary on the fragility of man’s relationship with a higher power, and while that may be true, everything Lucifer’s father does while on Earth facilitates the spiritual nourishment each individual craves. Sneaky.

Amidst the celestial family issues that dominate the episode, it’s easy to overlook the importance of Daniel’s struggle with the dark secrets he holds. Though his uncomfortable interactions with Lucifer’s father center around his sexual relationship with Lucifer’s mother aka Charlotte Richards 2.0, we shouldn’t forget the unresolved killing of detective Malcolm Graham back in season one. In a previous episode God casually implies that Dan will be going to Hell, and here, after hearing the detective’s apology for sleeping with God’s wife, the Big Guy’s ultra firm handshake causes Dan to literally explode inside the precinct. God immediately puts him back together, but that’s not the point. Dan’s fears about the afterlife are real, and while God’s interactions with him generally add a bit of levity to an otherwise serious scene, there is truth in jest.

Despite opinions to the contrary, God is not dead, and He truly does work in mysterious ways, especially on Lucifer. And even if He leaves Earth to his sons, “Resting Devil Face” makes plain that Dear Old Dad’s influence is alive and well and not going anywhere anytime soon. Naturally, we all hope that the Devil and the detective can work their way through this relationship speed bump, but it sure sounds like there may be a job opening in the Silver City.

In the Heights Ending Is Perfect for Our Current New York City Moment
How Marcia Lucas Saved Raiders of the Lost Ark’s Ending
My Hero Academia Season 5 Episode 12 Review: The New Power and All For One
Elden Ring: 10 Details You May Have Missed in the New Trailer
Cruella 2: How to Make the Villain Evil Enough to Kill Puppies