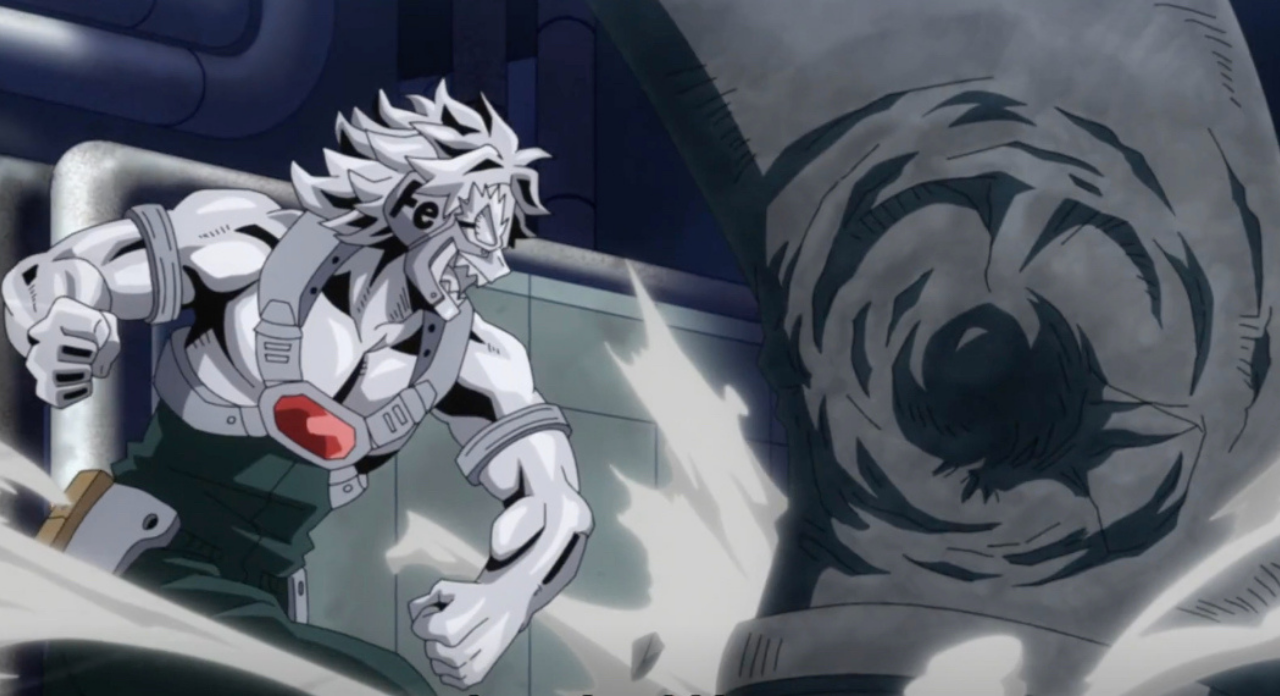 “The strong spirit…of a successor.”

A major problem that can arise when anime enter “Tournament Arcs” is the fatigue that sets in from constant action that’s manufactured and doesn’t have any actual buildup or emotional connection between the fighters. My Hero Academia is at least able to keep things relatively fresh due to the wildly unique nature of Quirks, but the episodes in this season have already highlighted that there is considerable overlap between some of these abilities. Creative powers aren’t enough and now that the Joint Training Arc is at its third consecutive fight, this season begins to face the larger issue of how to make these back-to-back-to-back battles continually interesting and not just play as mindless action with no deeper substance. “Match 3” leans into backstory and personal goals, which leaves its characters ready to attack, but then doesn’t give them much to do when it actually comes to the fighting.

“Match 3” begins with Class A and Class B currently sitting at a tie of one victory apiece in this joint training exercise. The previous teams made up of Class A students have effectively showcased lower tier ancillary heroes, but this latest battle features both Shoto Todoroki and Tenya Iida, two of the anime’s more prevalent supporting characters. Granted, Todoroki and Iida’s team is also rounded out by Mezo Shoji and his Dupi-Arms Quirk as well as Mashirao Ojiro and his Tail Quirk, but they’re both fairly innocuous. Iida and Todoroki don’t just do the heavy lifting for the team, but they also both carry some heavy personal baggage into battle.

It’s contained to a very brief discussion, but Tokoyami’s burst of transparency with Shoto over how they represent the Number One and Number Two Pro Heroes through their connections to Endeavor and Hawks develops into an engaging theme that powers this third joint training match. Shoto understands that they’re not just fighting for their class, but to also do their Pro Hero counterparts justice. This desire to inspire also figuratively and literally fuels Iida’s actions in this fight. He carries with him the burden of taking up the Ingenium mantle from his recuperating hero brother. This is Iida’s first fight under his brother’s former handle and this leaves him more driven than ever to perform his best.

“Match 3” establishes that Class A’s team has a lot to prove, but the episode painfully takes its time before it actually heads into the next battle. There’s been a level of reflection after each fight, but this is the first time that it feels especially meandering and at a detriment to the episode’s momentum. There’s a strange dynamic to the first half of this installment since the extra material with Endeavor and All Might is enjoyable, but it also feels too brief for its own good or that it’d be more appropriate elsewhere.

Todoroki and Endeavor both reflect on difficult training exercises from Shoto’s youth that further highlight Endeavor’s aggressive nature. This chilling flashback is nothing new, but it hits differently after the extensive work that My Hero Academia has put in towards Endeavor’s redemption. “Match 3” intentionally draws attention to how Shoto’s brother, Toya, couldn’t handle Endeavor’s intensity and that there’s still a dark side to the Todoroki family that bubbles underneath the temporary calm that’s been found. Alternatively, the scene where Endeavor swoops in to take down a street-level criminal beautifully demonstrates just how far the character has come–especially with kids–and that his rehabilitation is anything but performative. His malaise over Shoto’s inability to respond to his text messages is surprisingly powerful and the strongest scene from the episode.

All Might is also concerned over his prodigy and he makes some time to discuss One For All’s recently wonky nature with Deku, even though he doesn’t have any answers to give him. The two agree that Shinso has some mysterious connection to the spontaneous activation of Midoriya’s Quirk, but it’s Bakugo who provides some of the most interesting commentary here. He exhibits some Bakugo-style concern over Midoriya’s situation that’s actually incredibly sweet and a warm reminder of their ever-evolving friendship. Deku still needs to keep all of this a secret and so it’s endearing that a decrepit All Might and belligerent Bakugo have become his only sounding board.

The fight finally begins and Todoroki and Iida’s heightened emotional states guarantee that Class A has a lot more on the line psychologically than any of their opponents from Class B. However, “Match 3” allows Tetsutetsu and his team the early advantage. Tetsutetsu’s master plan is to essentially engage in a rampaging demonstration of chaos, which loses points in subtlety, but does at least get Class A’s attention. This strategy isn’t nearly as clever as what’s gone on in the previous fights and it sets itself up as a head-on collision of strength, which is exactly something that this season has avoided up until this point. This works in the small dose that it’s provided in and it’s likely that Todoroki and Iida, two of the smarter characters in the series, will introduce a more intricate approach to their attack.

Class B’s heaviest hitters in this fight appear to be Tetsutetsu and his extreme durability and strength, as well as Juzo Honenuki, who uses his Softening Quirk to cripple Iida’s speed and rob him of his greatest asset. It’s another smart instance where My Hero Academia combines Quirks together like science experiments to generate the most exciting reactions. The rest of these Quirks, like Sen Kaibara and drill-like Gyrate Quirk and Pony Tsunotori’s Horn Cannon Quirk lead to stalemates with their Class A counterparts. None of these smaller Quirks make much of an impression here and they feel like unrelated distractions to the main event, which is also a level of recklessness that’s new for these battles. “Match 3” provides a decent sampler of all of these characters, but it’s still too early into the fight to make any assumptions about which direction it’s headed.

“Match 3” teases some interesting ideas, but it ultimately feels like an empty, uneventful episode. This isn’t the only installment from this season to divide a single battle across multiple episodes, but the previous occasions of this didn’t feel incomplete when they ended on a cliffhanger. “Match 3” ends with an unresolved energy and this episode would feel more complete if it got a little further into the fight and showed off more of the larger showdown between Iida and Tetsutetsu.

My Hero Academia looks to be saving the best material from this encounter for the next episode, which means that “Match 3” is meant to be a more muted detour that generates suspense between two action-packed entries. This justifies some of “Match 3’s” structural and narrative decisions, but it still spends too much time on the previous episode’s aftermath, but also loses itself as it sets up the battle’s climax in the next episode. As a result, “Match 3” becomes disposable and often feels more like disparate parts than the sum of its collective pieces. The ground that it covers is important, but it’s hard to picture many revisits to “Match 3” once “Match 3 Conclusion” is available and does more with the story.