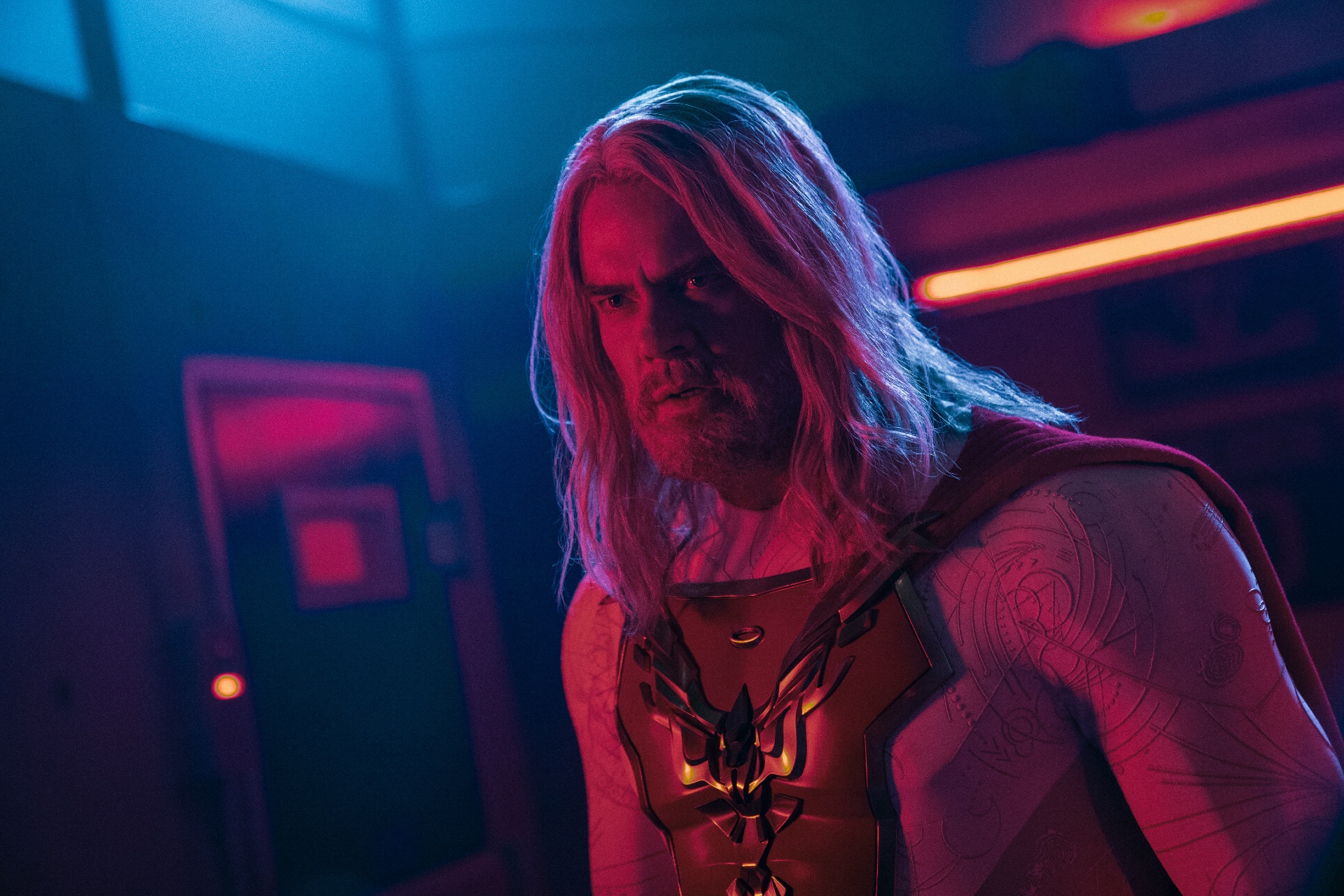 This article contains spoilers for Netflix’s Jupiter’s Legacy and the comic.

Netflix’s Jupiter’s Legacy, the first product of the streaming company’s acquisition of Mark Millar’s “Millarworld” universe back in 2017, sets the stage for an epic superhero drama that looks to only intensify in subsequent seasons. The first season ends with several devious plot threads set in motion, most of them revolving around the deceitful Brainwave/Walter Sampson’s sneaky betrayal of his brother, the Utopian/Sheldon Sampson, and their superhero group the Union.

In this feature we’ll break down some of the biggest moments and revelations from the end of the season and how they’ll likely impact the story moving forward.

What really happened on the island?

In the penultimate episode of the season, we see Sheldon and the rest of the adventurers open a mysterious door to a desert expanse where they find an enormous, floating, otherworldly object. From the light, an apparition of Sheldon and Walter’s father emerges, along with apparitions of matriarchs and patriarchs from the other adventurers’ lives, who tell them that they have “completed the ordeal” and “succeeded where so many have failed.” Then, they’re consumed by an explosion of energy and descend from the sky high above the boat they arrived on, imbued with unique superpowers all.

The big mystery here is, who are the beings that gave the Union their powers? And what is their reason for bestowing these gifts? In the books the encounter is a little less nebulous—they’re definitely aliens who’ve remained hidden on the island for quite a long time. But the show has altered several major pieces of the narrative from the source material, so it’s likely that the truth behind the island encounter will be entirely unique. What we do know is that the superpowers gifted to the Union haven’t exactly been the ultimate answer to the world’s problems that Sheldon thought they’d be, so perhaps these beings knew all along that they were sowing the seeds of Earth’s destruction.

Where do Sheldon and Brandon stand?

At the story’s outset, Brandon broke Sheldon’s Code by killing Blackstar (who we later learned to be a clone) in a fight that cost the lives of two young heroes and nearly cost the life of his father. The sanctity of the Code was the main point of contention between the two throughout the season—Sheldon believes Brandon should have let him die to honor the Code, but Brandon doesn’t regret choosing his dad’s life over Blackstar’s.

A poetic role reversal occurs in the season finale: Someone has released Blackstar from his cell at the Supermax prison, and he’s taken Brandon hostage. With his son’s life on the line, Sheldon hesitates to kill Blackstar and break the Code like his son did for him. Brandon is ultimately saved by Petra Small who distracts Blackstar long enough for the heroes to gain the upper hand, and after the fight, when Sheldon assures Bandon that he wasn’t going to let Blackstar kill him, his son replies with a chillingly apathetic, “I know, dad.”

The rift between Brandon and Sheldon is clearly beginning to widen, and this may be the exact moment when Brandon realizes he can live by his father’s code no longer. There’s a lot of brewing resentment here, particularly because Sheldon may have chosen the code over Brandon had Petra not interfered. We’ll see in upcoming seasons whether Brandon is still on his father’s side or not—in the comics, that’s a hard “NO.”

What has Walter been up to?

It’s revealed in a tete a tête-à-tête between Walter and his psychic-powered daughter Raikou that he was the one behind the Blackstar clone and the Supermax breakout of the real Blackstar, planting evidence to make it seem like Skyfox was behind the whole thing. After poking around in her dad’s brain, Raikou uncovers that he devised his plan to “create instability within the Union…that will force new leadership.”

Walter goes on to say that the country is “spiraling out of control thanks to Sheldon’s laissez-faire attitude.” Gifted with the most powerful mind on the planet, Walter appears to be poised to drive a wedge between his brother Sheldon and his nephew Brandon and take control of the Union—and the country, apparently—himself. Raikou is the only one hip to his scheme, but he takes care of that loose end in gruesome fashion. More on that in a bit.

In the comics, Walter’s betrayal is telegraphed more clearly and earlier on—there’s a clear resentment and ideological clash between him and Sheldon early on. On the show, the writers are a little sneakier in revealing Walter’s true motives, concealing his betrayal by portraying him as nothing but helpful and supportive in the present-day segments. The show seems to be following the narrative of the books in broad strokes, and if this continues in future seasons, we’re in for some truly despicable, supervillainous behavior from Walter that will rip the Sampson family apart from the inside out.

What happened between George/Skyfox and the Union?

Until the season finale, George/Skyfox is only seen in the flashback portions of the show. It’s alluded to by the characters in the present day that he turned his back on the team in despicable fashion, though the details of the betrayal aren’t quite clear.

What is clear is that Walter is using the Union’s hatred toward Skyfox as a way to veil his insidious plans. We also know that Hutch, along with Chloe, is on the hunt for his father. Surely when he finds him many of the unanswered questions surrounding Skyfox will be revealed.

But what the real truth will likely lie in a future season that will presumably be based on the prequel book “Jupiter’s Circle,” which tells the story of exactly what happened between the Union in their early days of superheroics that led to the group being splintered by Skyfox. The show has already rearranged the format and timeline of how the story is delivered in major ways, however, so we might get answers sooner rather than later depending on how the writers choose to let their version of the story unfold.

Why did Walter do THAT to Raikou?

Being the only person on earth who’s aware of Walter’s plans to dismantle the Union comes with great leverage—$50 million worth of leverage, to be exact. She explains to her father that she “[doesn’t] give a shit about the Union or America,” and that she’s willing to remain quiet for her asking price.

Walter, the master manipulator that he is, doesn’t believe he can trust his daughter to keep their secret should a higher bidder come along. It’s revealed that their conversation is taking place within a psychic construct and that, in the real world, he’s slit his own daughter’s throat.

Raikou plays a larger part in the books later in the story, so it’s a bit of a shocker that she’s offed so early on. The death serves as a powerful demonstration of just how unflinchingly evil Walter can be, however, and it sets the stage for just how ugly the story is going to be going forward.

Jupiter’s Legacy is available to stream on Netflix now.

Critters: The Making of a Comedy Horror Cult Classic
How the Star Wars Obi-Wan Series Made Ewan McGregor Feel Like a Kid Again
The Flash: A Heartfelt Goodbye to Cisco Ramon
My Hero Academia Season 5 Episode 12 Review: The New Power and All For One
E3 2021 News: Announcements, Trailers, and Reveals You Need to See