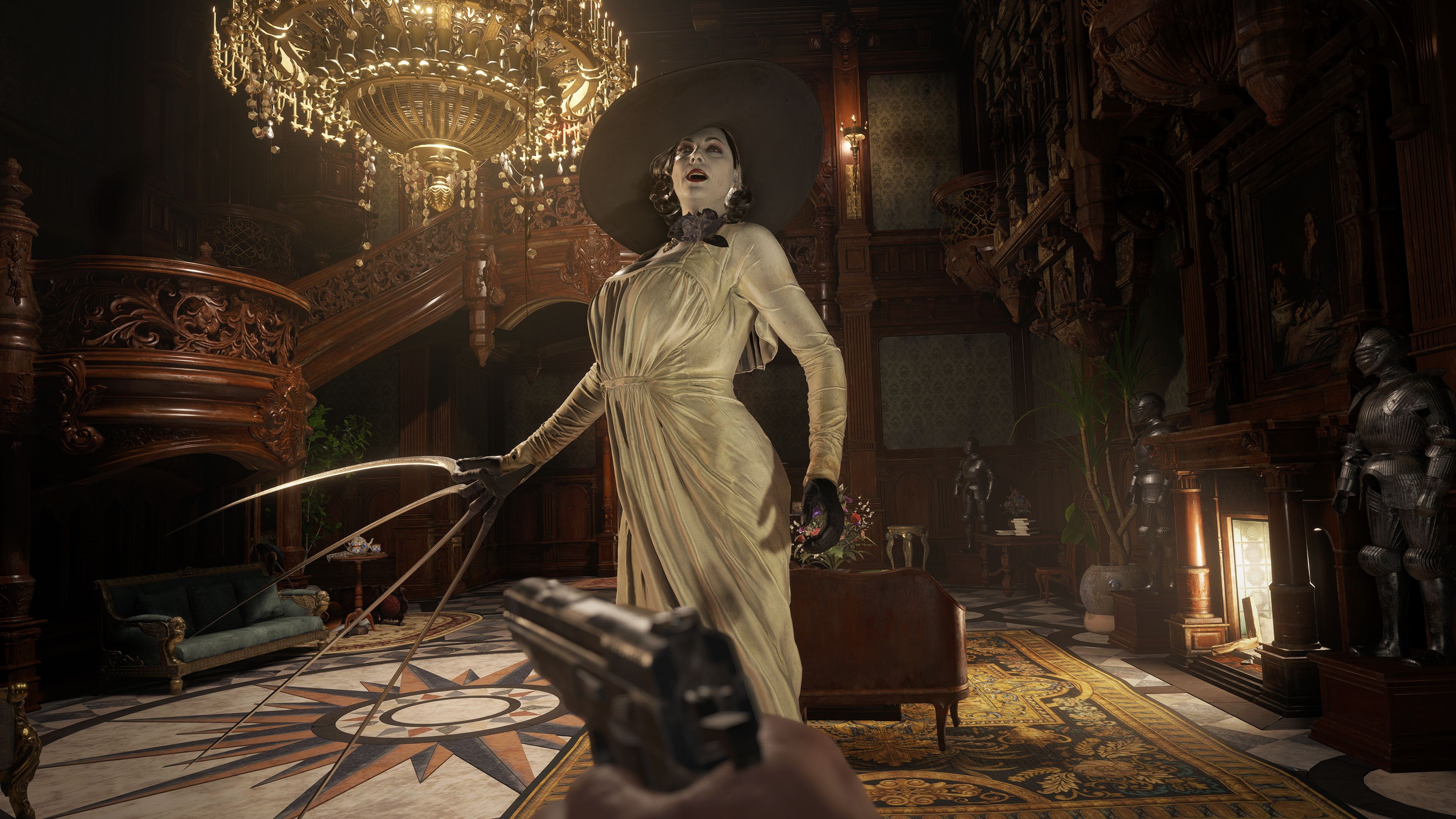 Ethan Winters can’t catch a break. After surviving the horrors of Baker Ranch in Resident Evil 7, it seemed like the everyman hero would finally get to go back to his normal life. But when seasoned zombie killer Chris Redfield shows up at his door with a new mission, Ethan is suddenly thrust back into the nightmare.

In Resident Evil Village, Ethan is dropped into a haunted European village, where he’ll have to survive a gauntlet of monsters, including werewolves and witches. Then there’s Lady Alcina Dimitrescu, the giant vampire villain who has taken the fandom by storm since she was first revealed.

Here’s what you need to know about the new game’s most interesting baddie:

Taller Than the Tallest Human

Before Resident Evil developer Capcom revealed her name, the villain was referred to as “Tall Vampire Lady” on social media, and for good reason: she’s 9’6”! That’s taller than the tallest human in recorded history. That would be “The Giant of Illinois,” a man named Robert Wadlow, who was 8’11” and at one point toured with the Ringling Brothers Circus.

Fortunately, his act didn’t involve anything quite as gruesome as what the Lady of Castle Dimitrescu has planned for her prey. Not only does she tower over Ethan but she also has long, sharp claws for fingers. The better to impale our hero with!

The First Vampire in the Series

Her appearance isn’t the only thing that makes Lady Dimitrescu so interesting. She’s also the first vampire villain in the franchise’s history. Resident Evil has largely avoided the classic monster canon up until this point, favoring zombies and monsters grown in labs over the creatures found in Universal and Hammer horror films.

Dimitrescu represents an evolution for the series. However, this isn’t the first time Capcom has considered experimenting outside of the franchise’s wheelhouse. At one point, Resident Evil 4, which is clearly a big influence on Village, was going to feature a killer ghost with a hook for a hand, but the idea was scrapped before release.

While she marks a first for Resident Evil, Dimitrescu’s role as the bloodthirsty Lady of a giant castle full of spooky creatures is rooted in a classic video game trope. The concept of a vampiric final boss was originally popularized by the Castlevania series, which is largely set in Dracula’s haunted castle full of monsters.

What makes Dimitrescu’s house of horrors unique is that it’s populated only by women. “With Lady Dimitrescu as the cult’s guru, we have created this hierarchy of women,” Resident Evil Village director Morimasa Sato told IGN. “Men have their blood drained by these women, so you could say it’s the opposite of Dracula.”

Lady Dimitrescu isn’t the only vampire in the game. She has three blood-sucking helpers she refers to as her daughters. While Dimitrescu’s attire exudes elegance, Bela, Cassandra, and Daniela lean into the grotesque, down to their smiling, blood-covered faces.

It’s teased in the trailers that Ethan will have to make his way past Dimitrescu’s vicious daughters before reaching the Lady, and it won’t be an easy fight, as these vampires not only carry sharp weapons but also have the ability to transform themselves into even more hideous forms. The way they creep towards Ethan and huddle over him to feed may remind you of Dracula’s movie brides.

According to art director Tomonori Takano, the game’s “bewitching vampire” was partially inspired by real-life serial killer Elizabeth Bathory, a Hungarian noblewoman who is said to have tortured and murdered hundreds of women in the early 1600s. Legend has it that Bathory bathed in her victims’ blood because she believed it would stop her from aging.

Another inspiration was the Japanese internet urban legend Hashaku-sama (or “hachishakusama”), an eight-foot-tall evil spirit in a wide-brimmed hat who lures her young male victims to her by imitating the voices of their loved ones. Likewise, all of Dimitrescu’s victims are men, many of their bodies decorating the outside of her castle, “blood drained, looking like skinny scarecrows,” according to Sato. Terrified yet?

The Name “Dimitrescu” Has a Long History

Unsurprisingly, this vampire lady’s name can be traced back to Eastern Europe, especially Romania, where Transylvania is located. Romania also happened to be the home of Vlad the Impaler, the brutal warlord who inspired Bram Stoker’s Count Dracula.

The name “Dimitrescu” could also be derived from Demeter, the Greek goddess of harvest, grain, and fertility, which makes sense since the Lady rules over and terrorizes a village of farmers. Interestingly enough, in Bram Stoker’s novel, Dracula travels to England on a ship called The Demeter.

Maggie Robertson, a stage actor from the Washington D.C. area who has also appeared in a few screen projects, voices Lady Dimitrescu. While this is her first major role in a video game, her performance as the already uber-popular lady of Castle Dimitrescu could be the breakout role that turns her into one of the industry’s up and coming voice talents.

Meanwhile, Polish actor Helena Mankowska provided her likeness for the character, turning her overnight into one of the most popular faces in survival horror. She has another interesting connection to the franchise: Mankowska was Milla Jovovich’s (Alice in the Resident Evil movies) stunt double in the movie Paradise Hills.

Resident Evil Village is out on May 7 for PlayStation 5, Xbox Series X, PC, PlayStation 4, Xbox One, Stadia.