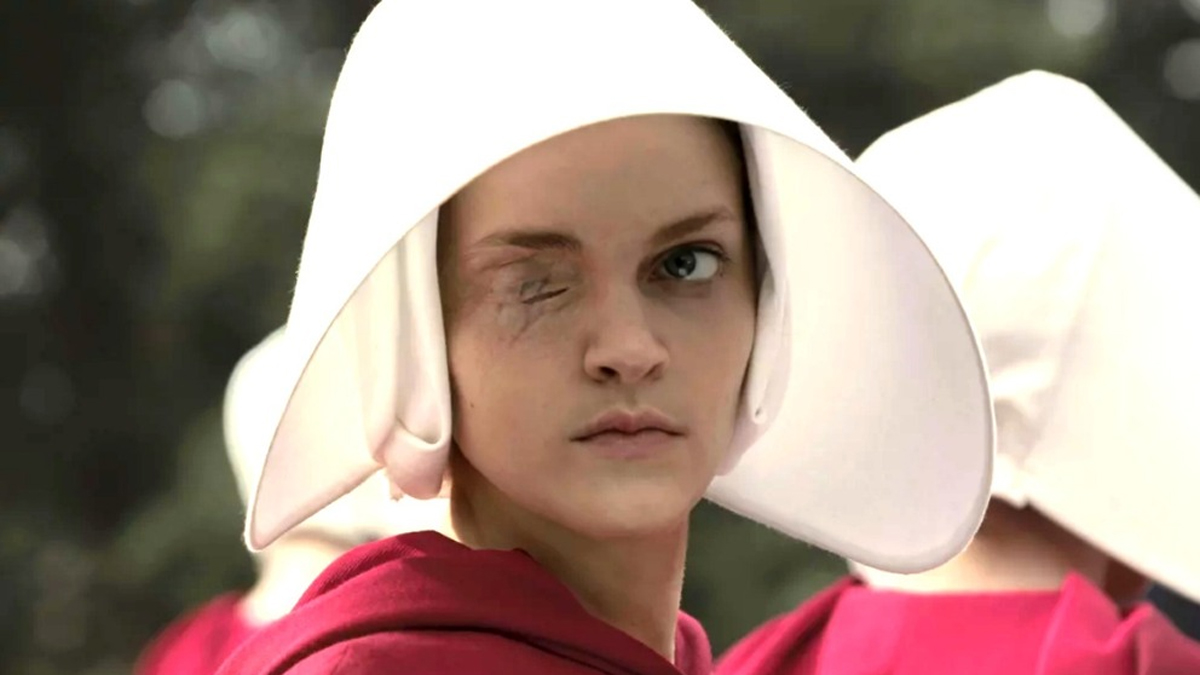 “It’s been five years since we had our children torn away from us, an eternity. […] We’ve missed everything. The steps. The smiles. The tragedies…” – June Osborne, The Handmaid’s Tale, Season 3, Episode 10

Janine Lindo, played by the excellent Madeline Brewer, is a sweet soul who’s always been like a little sister to June and the others in The Handmaid’s Tale. She’s retained a childlike openness and lack of cynicism despite – or perhaps as a reaction to – the cruel treatment her character has received both in and out of Gilead.

Over the seasons, Janine’s naivety has left her vulnerable. She unwisely spoke out against the Aunts at the Red Centre, and they punished her by taking her eye. She believed Commander Putnam’s lies about leaving his wife to run off and live with baby Charlotte as a family, and was left suicidal. She thought her request to re-join the Putnam household would fall on sympathetic ears, and was savagely beaten by Aunt Lydia as a result.

Tough as she is, and as much as she’s survived, Janine’s instability brings out the other Handmaids’ protective instincts. So when June discovered in season three something that could break Janine – that her son Caleb had been killed in a car accident four years earlier – she kept it from her.

By lying to Janine, June was perhaps half protecting her and half protecting the plan to smuggle Gilead’s stolen children over the Canadian border. Janine had always been volatile and wasn’t always able to control herself in order to avoid Gilead’s punishments. If she’d been told about Caleb’s death, Janine’s subsequent emotional fallout could have endangered them all, letting Gilead know that a Handmaid had accessed secret files in the Lawrence basement.

So June lied. In the freezer aisle of Loaves and Fishes, first she recruited Alma to the plan which would become Angels’ Flight by telling her that her son Dylan was now named Joshua and living with a family in Amherst. “How long are we going to let them keep him?” June asked. As a call to action, it worked. Alma committed to helping June’s rescue plan.

Listening in, so did Janine. (“I can help. What?” she reacted to the others’ disbelief, “I’m brave.”) And then she asked June what she’d managed to find out about her son. Like Hannah and Dylan and so many others, Caleb had been stolen from Janine in the early days of Gilead. As a single parent, Janine had been judged unfit for motherhood, not that Gilead was about to let her fertility go to waste.

Instead of telling Janine the truth, June invented a reassuring fantasy. Caleb’s family had been transferred to California, she told her. “His mom seems super nice.” Janine cried and smiled with joy and relief asking “He lives on the beach?”. “Yeah. He lives on the beach,” assured June.

In season four episode four ‘Milk’, a flashback introduces us to Caleb for the first time. We see Janine as a loving mother bringing him up alone while working as a waitress and struggling for money. Tragically, the little boy she so adored wouldn’t only be taken from her once by Gilead, but again by a twist of fate after the military coup.

Was June right to keep the truth about Caleb from Janine, or was lying to protect her a betrayal? Perhaps there’s another possibility. In ‘Milk’, Janine shows herself to understand much more about the cruel ways of the world than her naive persona suggests, and to have protective instincts of her own. Back in season three, when she smiled at the idea of Caleb growing up on a sunny beach, perhaps she recognised June’s lie for exactly what it was, a blissful fantasy escape from an unbearable truth.

The Handmaid’s Tale season four streams weekly on Hulu in the US. It’s due to air on Channel 4 in the UK at a later date.