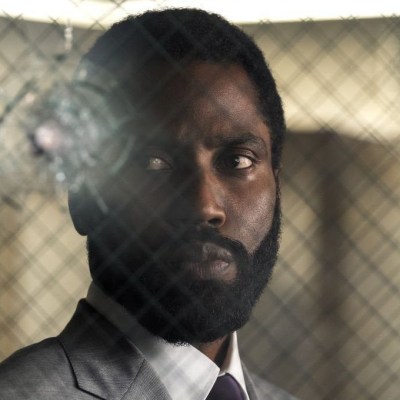 The Protagonist didn’t even know what it was when he first saw it. John David Washington’s lead character without a name thinks he’s looking at a bizarre “encapsulation” when he first sees a piece of the “Algorithm” in Tenet’s opening moments—which is to say he thinks it’s a nuclear weapon. Hidden inside of a backpack at an opera house under siege, what else could justify this level of violence and chaos during the movie’s confounding start?

But then, that’s the type of linear thinking which the Protagonist and his audience are asked to leave behind by filmmaker Christopher Nolan. With his latest globetrotting science fiction epic, Nolan takes his penchant for bending the rules of time and physics to a seeming breaking point, with even the MacGuffin of the film playing a vital role in creating a scenario “worse” than nuclear war. Divided into nine pieces, including the shiny object in the movie’s beginning, the film’s Algorithm is a device capable of destroying the world and reversing the literal flow of time.

The how and why of its creation, however, can be a little confusing, especially on first viewing. So allow us to explain…

What the Tenet Algorithm Is

The Algorithm is a physical rendering of a formula that can invert the entropy of the world. Invented by an unnamed scientist in the future who is described as the J. Robert Oppenheimer of her generation, the device is an extension of all the other timey-wimey shenanigans seen throughout Tenet.

During the movie, audiences see what happens when objects have their entropy inverted, such as the shattered bullet returning to the Protagonist’s gun, or when an individual has their personal entropy reversed. It’s what allows John David Washington to keep hitting himself in an airport fistfight. However, while objects or persons are traveling through time in reverse, the larger entropy of the world around them remains the same. Apparently, this is what allowed the Protagonist to survive an explosion while his entropy was reversed. He of course felt a reverse of the fire’s sudden heat when the temperature in his car plummeted, but the actual flames were created in a world where the laws of physics are observed, including the direction of time.

The Algorithm reverses this. Rather than the object or Protagonist moving in reverse through time, essentially pushing against the current, the Algorithm would make everything move in the other direction and reverse the direction of the tide. It would also essentially destroy everything in the process because all the rules of physics which govern life on Earth would be broken in an instant.

It is the profound danger of this creation which explains (in part) why the future scientist rendered it into physical form. After she takes her own life, the Algorithm she built becomes a one-of-a-kind formula that cannot be duplicated or copied, or shared via correspondence that might wind up in the hands of a future historian with a very critical eye.

Why the Algorithm Was Built

The Algorithm would destroy all current life on Earth, but that’s not why our future descendants invented the doomsday device—though one suspects setting it off in the early 21st century must be particularly satisfying to the generations raised in the fallout of climate change.

Indeed, this “cold war” between the past and future exists because the Algorithm was hidden in the past, preventing it from its purpose. While it would kill all existing life on Earth instantaneously, our future’s descendants do not believe in fate, determinism, or “the Grandfather Paradox.” The last is the time travel theory which states it’s impossible to go back in time and kill your own grandfather, because then you would not exist. Those in power in the future instead operate on the notion that they can kill their ancestors in the past without destroying themselves. What’s happened has already happened, be it in the past or their births in the future.

So while the Algorithm would destroy those of us living in the early 21st century, it would also reverse the entropy of time, from the beginning to the end. Hence those in the future with the technology to already live in reverse could thus live on in a world where the direction of time, and presumably other laws of physics, have been reversed. They can also eventually flourish in an even further future which exists in our past, before climate change ravaged the planet.

During the climax of the movie, in the midst of all the temporal pincer movement madness, Kenneth Branagh’s arms dealer Sator explains he doesn’t see his choice to “sell our futures” as any different than the rest of mankind, which for decades has given an ambivalent shrug to the effects of climate change. Sator might be destroying our world, but in his own words he’s “creating a new one.”

“The same sunshine we basked in will warm our descendants generations to come,” Sator gloats. He adds it’s also the future’s only recourse “because their oceans rose and their rivers ran dry. Don’t you see, they have no choice but to turn back? We’re responsible.”

So our future descendants get to kill those of us who sold out the planet while also reversing the flow of time, which theoretically will allow already existing future generations to live for millennia as the oceans lower and the planet cools.

Why the Algorithm Is in the Past

Of course the actual woman who invented the Algorithm disagrees with that hope of her contemporaries, and her skepticism is what triggered the whole plot of Tenet.

Described as the Oppenheimer of her generation, comparisons are drawn between the future scientist and the head of the Manhattan Project—the operation which brought about the first nuclear weapons.

“As they approached the first atomic test, Oppenheimer became concerned that the detonation might produce a chain reaction, engulfing the world,” the character Priya (Dimple Kapadia) tells the Protagonist. And she’s not wrong, although in reality it was more physicist Edward Teller (“the father of the hydrogen bomb”) who entertained this nightmare scenario. In a nutshell, he suggested in 1942 that a nuclear fission bomb might create temperatures so extreme it would cause the hydrogen atoms in the air and water to fuse together, forming helium. In essence this would light the atmosphere on fire, burning up the water in our seas, and eventually engulfing the planet in flames until the Earth became a miniature star.

“They went ahead anyway and got lucky,” the Protagonist sums up about this actual history.

However, Tenet’s future scientist finds herself in a similar scenario where she essentially decides she believes in the Grandfather Paradox—that you cannot kill your grandfather without killing yourself. Ergo, she doesn’t want to destroy the past, but not out of a sense of benevolence. Rather she fears that by reversing the flow of time in the past she’ll still destroy their future. So she took an extreme measure: to hide her formula in the past and take her own life.

“Unlike Oppenheimer, she rebels, splitting the Algorithm in nine sections and hiding them in the best place she can think of,” Priya says. “There are nine nuclear powers, nine bombs. Nine sets of the most closely guarded material in the history of the world. The best hiding place possible.” However, it’s a mystery who actually moved them back here if traveling through time in reverse still takes as much time as going through time’s normal direction. Seriously, did generations of people travel into the past, raising children in reverse to one day put an Algorithm piece in its rightful spot?

Also the scientist’s plan of hiding them in safely guarded nuclear storage facilities in the past might seem prudent, but given that she and future generations would know about the fall of the Soviet Union, maybe she shouldn’t have hidden one of the pieces of the Algorithm in a doomed state?

She does so, and for the more militant branches of the future, her plan brings their eyes to Sator, a greedy individual who happened to be in the right place at the right time when digging through a nuclear accident near the end of the Cold War.

With guidance and finances also transported to the past, Sator is eventually able to obtain all nine pieces of the Algorithm over about 40 years. Luckily, that’s where the plot of our movie kicks in.

At the end of the film, the Protagonist and a Tenet operative named Ives (Aaron Taylor-Johnson) divide the Algorithm again between themselves. Initially, Ives wants to kill both the Protagonist and Neil (Robert Pattinson), unaware that Neil is about to head to his death in the past, anyway. Ives wants as few people as possible to know about the Algorithm, depriving its last known location from being recorded for posterity. However, the Protagonist convinces Ives they’ll split the formula between themselves and travel further into the past, hiding it from each other and our descendants who figured out where their rogue scientist previously hid the pieces.

It also explains how a much older Protagonist was able to recruit Neil and build the Tenet organization, as he presumably went years (if not decades) into the past to hide his pieces of the Algorithm.

But who actually built and controls the turnstiles erected further into the past remains unexplained… So does your head hurt yet?