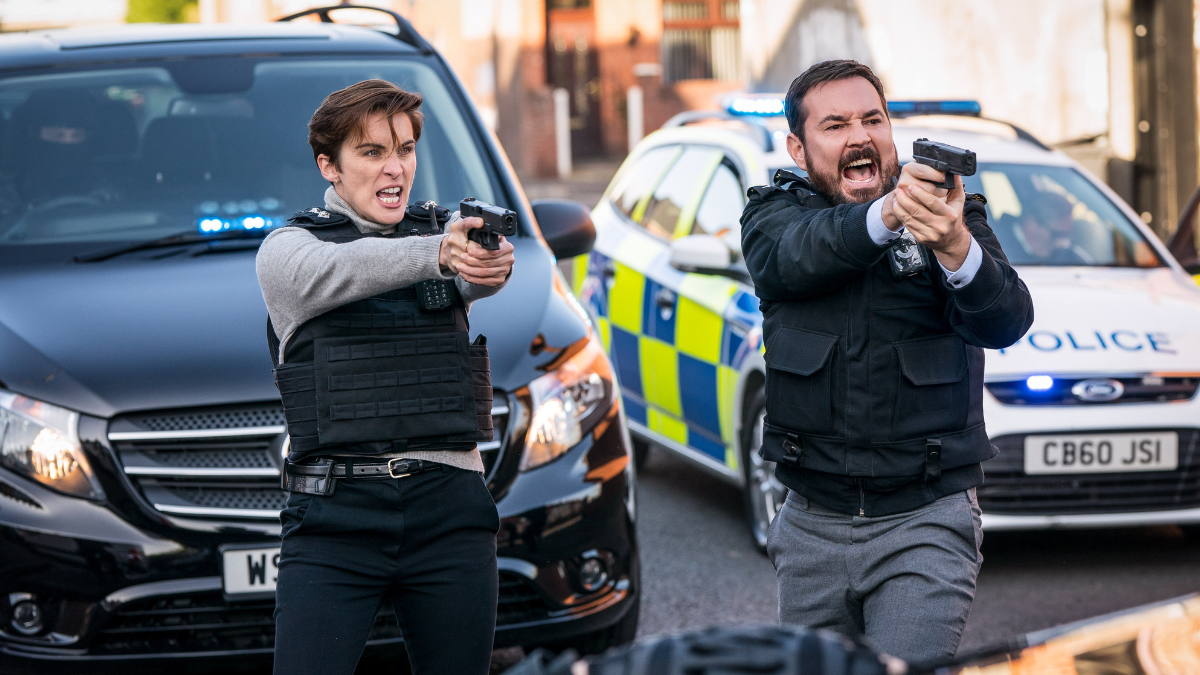 Ian Buckells, as I live and breathe. There we were, thinking you a workshy wally with one foot on the golf course and the other skidding on a banana skin, when all along… you were, well, that, but also tapping out OCG orders on your secret laptop in your secret millionaire’s pad and secret Gran Canaria timeshare. DSU Buckells. The Fourth Man. Line of Duty’s Keyser So-So.

The Buckells revelation played out for viewers just like it did for AC-12: What? Him? The sight of his curly mop in the interrogation room cut our kite strings and brought us thudding back to Earth. There’d been no mwahaha mastermind behind it all. No Moriarty-like spider of crime. The big bad was a greedy oaf who hid his criminality undercover of thickness. Since the death of Tommy Hunter, it’s been a machinery of small parts, one of which was called Ian. What better way to make the point that corruption is banal?

As TV twists go, it was unglamorous but honest and well disguised. When Buckells’ name came up in that trio of bent Lawrence Christopher investigators, he was instantly discountable next to the sexier distractions of Thurwell and Osborne. Thicky Buckells? As if. That one couldn’t organise a jam sandwich, let alone multiple OCGs. Or so he’d have us believe. No, Buckells wasn’t top of many people’s suspect lists, and to quote Kate, what does that make us look like? I’ll tell you: snobs. This whole exercise was a lesson from Brummie Jed Mercurio in prejudicial attitudes towards the Birmingham accent. There are clearly more brains than anyone allowed for behind Buckells’ twang, though not an ounce of conscience.

Conscience came into the finale in a big way thanks to Ted Hastings, who didn’t just talk the talk on accountability. Ted’s conscience marched him into Carmichael’s office, where he put his hands up for the leak that led to John Corbett’s murder. A vacuum of integrity, she only shrugged. Carry the fire? Carmichael doesn’t even carry her own coat.

If this does turn out to be the last ever episode of Line of Duty, at least we know that Ted won’t go to his grave unshriven. His real confession was made earlier to Steve and Kate in one of several emotional speeches with which Adrian Dunbar tore the roof off this episode. Exasperation. Indignation. Desperation. Ted’s pain was a foghorn reverberating through his every scene.

You could understand his position. All that work, all those deaths and bolt cutters and balaclavas and shock twists, for AC-12 to finally solve the Vella murder and unmask H. Then what? Nothing. No commendation or reversal from the CC, just another ‘rotten apples and lessons learned’ public statement. Business as usual. Worse than usual. The series was pointedly left on the sour note that AC-12 has never been weaker in its fight against corruption.

Though the war wasn’t won, the finale did offer some victories in battle. It punished the HMP Brentiss goons, and shook up Fairbank, now the Compo of corrupt coppers. It also rewarded some ill-used victims. Farida went back to work. Terry moved into a loving home. And Jo’s present whereabouts may be classified, but any fool can see that witness protection has lodged her in lesbian heaven. (That sunny-Golden-Retriever-knitwear-wellies-and-redhead paradise couldn’t have been more different from whichever bleaksville coastline Gill Biggeloe washed up on last series. The system may be pocked by wrongdoing, but there is at least some justice in Line of Duty’s world.)

Steve and Kate’s ending was also reassuring. They’ve got each other, Steve may also have “copper’s wife, me” Steph, and they’re both getting professional help to cope with the fallout of almost a decade of playing the leads in the hottest crime thriller around.

Some time off at a spa is due, surely, for that white van switcheroo stunt. Finally! After countless ambushes by the OCG over the years, at long last AC-12 turned the tables and got there first. The baddies were expecting to find Jo in the back of that prison vehicle, but instead got a faceful of Fleming. Triumphant.

That wasn’t AC-12’s only win. Forced to sit inside the unbearable fartcloud of Buckells’ smugness for most of his interview, they boxed clever with a three-punch attack that wiped the smile from his face. Did he and/or Osborne order the murder of Gail Vella, Ted asked. Fail to answer and Buckells would be seen as not cooperating, losing his right to witness protection. Admit to it, and he’d be charged with conspiracy to murder and thereby lose his right to immunity from prosecution. “Nobody makes mugs of AC-12,” crowed Ted, a man who’s clearly never been on Etsy.

It felt like an ending-ending. So has this whole series, with its concentration of returning faces and fan-pleasing Ted-isms, and the increasing volume of its protest. If this is the end, then viewers weren’t short-changed. Far from it. Series six indulged its audience to an insane degree, continually throwing the ball for us as we joyfully ran and fetched, ran and fetched, saliva and madcap theories flying.

This finale’s ‘plus ça change’ cynicism was to be expected – the first run ended on a similarly wry note. Less expected was this series’ earnestness. Through the mouthpieces of Gail Vella and Ted “What has happened to us?” Hastings, the police thriller delivered a polemic against the degradation of moral standards in public office. By ending on a speech about the blind eyes that have to be turned for villains to hide in plain sight, it transcended the diverting search for H and bent coppers, and tapped into a regrettably urgent theme of now.

Read more about Line of Duty on Den of Geek here.