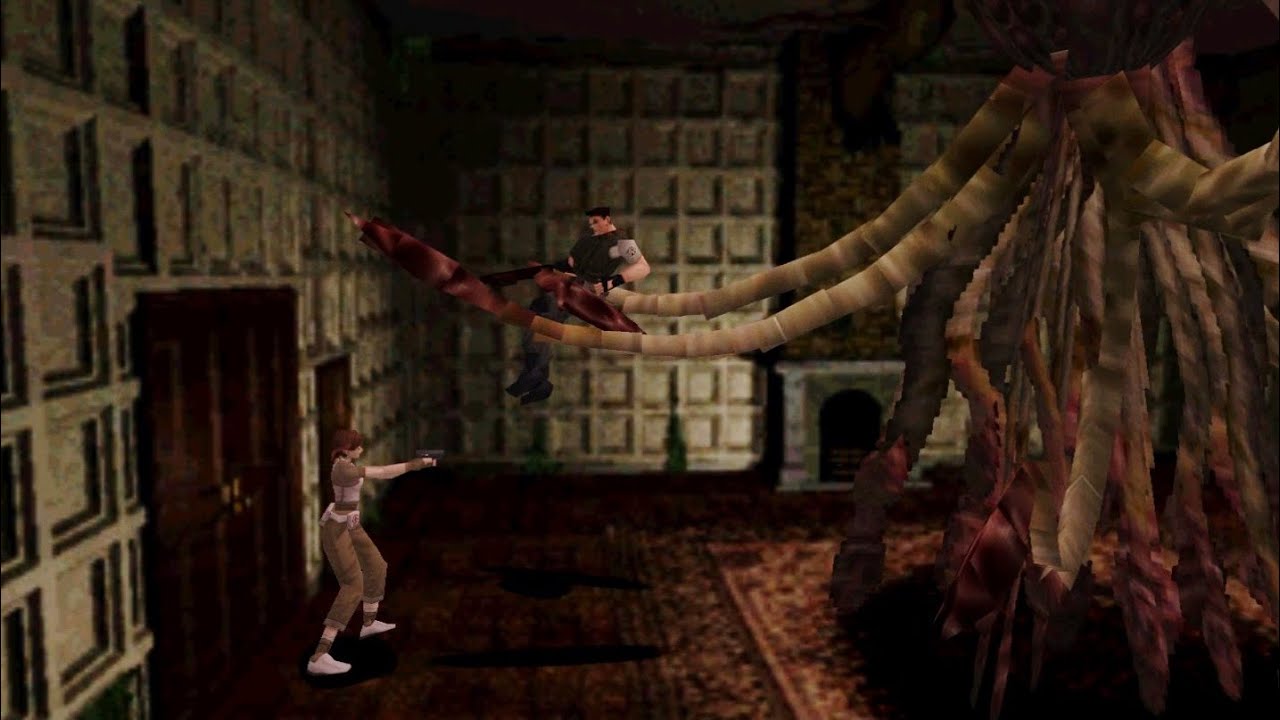 As the upcoming Resident Evil Village looks to terrify some with its classic monsters and excite others with its giant vampire ladies, fans everywhere find reasons to reflect on the greatest franchise in horror game history. Yet, I’m willing to bet that even some of the biggest Resident Evil fans haven’t heard about the “missing” game in the franchise: Resident Evil: DASH.

For over twenty years, rumors of a canceled project known simply as Resident Evil: DASH have divided the Resident Evil fanbase. For some, it’s the ultimate missing part of Resident Evil‘s legacy. To others, it’s one of the longest-lasting urban legends in video game history and a rumor that, much like a Resident Evil zombie, never seems to die.

What’s the true story of Resident Evil: DASH, though? That’s what we’ll try to uncover today as we dive into the fascinating history of this nearly mythical game.

Now, here is where things start to get complicated. You may recall that Resident Evil 2 started off as an almost entirely different game that was about 70% complete before Capcom decided to essentially start from scratch on what we now know as 1998’s Resident Evil 2. That scrapped version of the sequel is regularly referred to as Resident Evil 1.5, which is indeed something of a lost Resident Evil game.

You may also recall that Capcom started working on Resident Evil Zero not long after Resident Evil’s release. That game was supposed to debut on the Nintendo 64DD (and later the N64), but Capcom struggled to fit the project on an N64 cartridge, so they eventually just released it for the GameCube in 2002.

So where does Resident Evil: DASH fit into that timeline? The most popular version of the game’s development story suggests that it either would have been the direct sequel to Resident Evil or a kind of “spin-off” meant to fill in the release date gap between Resident Evil and Resident 2 (which would place its likely intended release sometime in 1997). In some ways, you could almost consider it another Resident Evil 1.5. There were also rumors it would be released on the Sega Saturn as a replacement for (or extension of) the Resident Evil port eventually released on that console.

Where does all this information come from? Well, most of the DASH talk seems to originate from an old magazine interview with Capcom’s Yoshiki Okamoto. I believe that the interview initially ran in a publication called Dengeki PlayStation, but there has been some dispute about the publication that originally ran the interview.

A translation of that interview that was passed around a few English language websites at the time included a reference to a game called Biohazard: DASH (sometimes translated to Resident Evil: DASH). In the coming years, various pieces of concept art were thrown around that reportedly showcased what DASH looked like during its early development stages before the whole thing was quietly canceled by Capcom.

So what did DASH look like at that time? Funny you should ask…

Resident Evil: DASH Would Have Seen Jill and Chris Return to Spencer Mansion

In any case, most reports about Resident Evil: DASH’s story seem to agree that the game would have taken place about three years after the events of the original and was always designed to take players back to Spencer Mansion. In fact, it’s been said that the game’s world would have essentially served as a “greatest hits” tour of some of the original title’s most memorable locations, which really does seem to support the idea that DASH was meant as a side project rather than a fully-fledged sequel.

You might be wondering how DASH would have brought us back to Spencer Mansion considering that the mansion was seemingly destroyed at the end of the first game. Well, it turns out that the DASH team reportedly accounted for that little problem and were working on a story that would have made DASH one of the strangest (and most fascinating) pieces of horror in the Resident Evil canon.

Resident Evil: DASH Was a Horror Game About Plants (and At Least One Spider)

Even though there have been a lot of conflicting reports about DASH over the years, one thing that everyone seems to agree on is that the project would have been a rare video game entry into the “natural” horror genre. Yes, Resident Evil: DASH would have gone full The Happening by telling a horror story starring plants.

According to DASH’s rumored plot, the explosion at Spencer Mansion left the place in ruins but didn’t entirely wipe it off the map. Actually, the explosion would have unearthed a secret underground lab not seen in the first game where Umbrella reportedly experimented on plants. Remember the Plant 42 boss fight in the original game? Apparently, that plant was just the tip of the iceberg in regards to what Umbrella was working on in the deepest parts of the mansion.

Now free from the lab, the mutated plants would have taken over the remains of Spencer Mansion, spawned new mutations, and would have even resurrected some creatures as plant/zombie hybrids. In fact, one piece of concept art suggests that the plan was to end Resident Evil: DASH with a fight against a giant plant with the face and features of Albert Wesker. Needless to say, the idea that Wesker had died and was resurrected as a plant hybrid would have drastically impacted Resident Evil lore had that story come to pass.

I should also mention the giant spider. Early Resident Evil: DASH art featured a version of the Spencer Mansion lobby completely overrun with spider webs. There has been some speculation the webs were constructed by multiple spiders, but there is a more popular version of that story that suggests a giant spider would have served as one of the game’s main antagonists and may have even played a role similar to Mr. X in Resident Evil 2 or the Nemesis in Resident Evil 3.

Sadly, here’s where I’ve got to throw some cold water on this story.

Resident Evil: DASH Rumors Are Based On a Major Mistranslation

See, Okamoto was actually talking about two separate projects in that interview: the Sega Saturn port of Biohazard and Rockman: DASH (which we know as Mega Man Legends in the West). A widespread mistranslation of the interview essentially combined those two games, and people became convinced that Capcom was working on a Resident Evil game we just never heard about again.

From there, those who believed the story and those who were just happy to troll the rest of us joined forces to bolster the idea that there was this very convincing Resident Evil project canceled under mysterious circumstances.

So all of that concept art for DASH was also created by fans, right? Well, no, actually. Most of that concept art came from Capcom and the Resident Evil team. In fact, the origins of those drawings are a big part of the reason why the DASH rumors have flourished after all these years.

While it seems that some of the concept art for Resident Evil: DASH that has been circulated over the years may have been manufactured by fans, most of it comes from a combination of sources that were simply misrepresented when they were shared online.

Resident Evil Zero is actually one of the biggest early contributors to the Resident Evil: DASH myth. A lot of concept art from that game has been attributed to DASH over the years. It’s easy enough to see why people would buy into the idea that art was associated with DASH at a time when most fans didn’t even know Zero existed, but even in the years that followed Zero‘s 2002 release, vague pieces of that title’s concept art have convincingly been misattributed to DASH.

What about all of those drawings of Spencer Mansion covered with spider webs and wildlife, though? Interestingly, it seems some of those drawings originate from Resident Evil 2’s development. Actually, in a 1998 magazine interview, Resident Evil writer Noboru Sugimura mentions that the team originally intended to have players leave the police station in Resident Evil 2 and eventually work their way back to a version of Spencer Mansion inhabited by “a monster that was left alive in the blasted out ruins of the lobby and dining hall.”

While there’s no mention of any plant monsters in that interview, it really does seem that the Resident Evil team once seriously considered featuring a version of Spencer Mansion typically associated with Resident Evil: DASH in Resident Evil 2. Like so many other things about that game, though, plans changed along the way.

So while Resident Evil: DASH must be considered an urban legend, it’s fascinating to see how so many of the rumors that have kept the project alive over the years are based on games that were eventually released or ideas that Capcom had considered at some point.