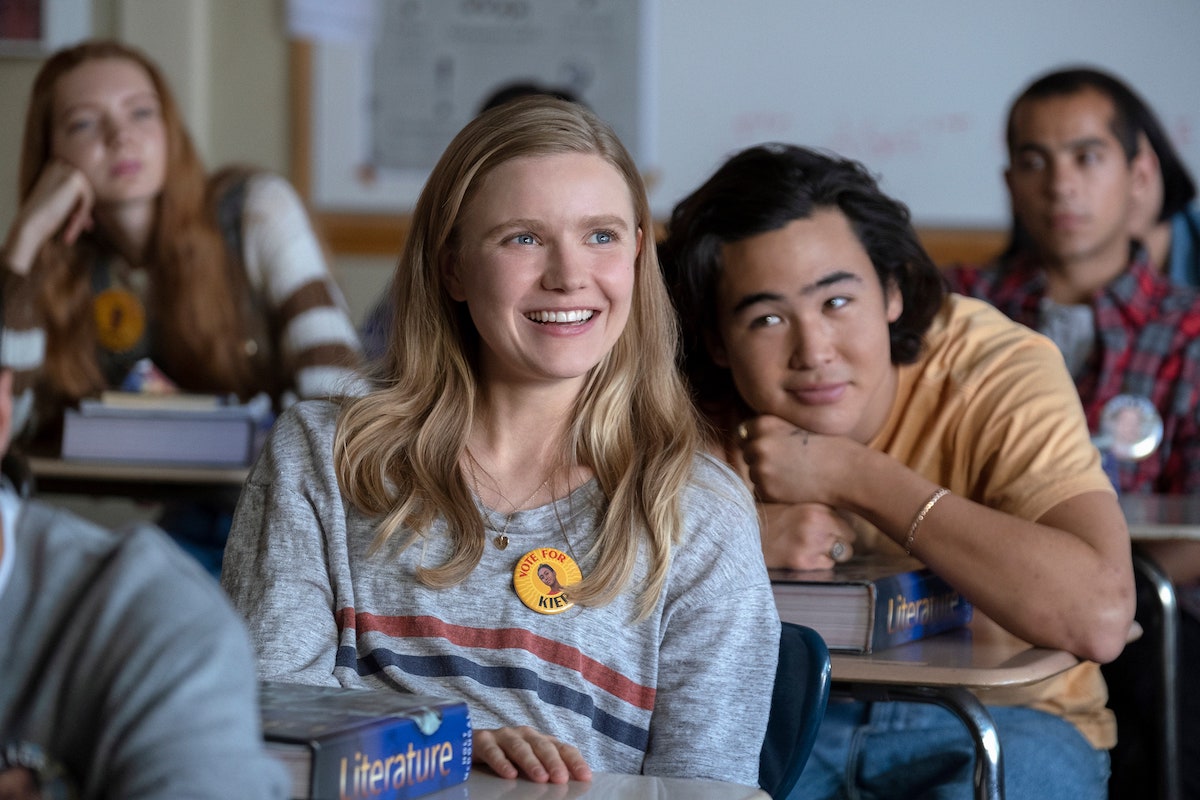 Directed by Amy Poehler, glorious coming of age comedy Moxie hit Netflix last week and was a joyful celebration of giving a damn. The movie sees 16-year-old Vivian (Hadley Robinson) inspired by her mum’s (Poehler) former feminist escapades and the misogyny she sees at her school to produce her own Zine (called Moxie) to unite her class mates and try to make a difference.

Sometimes she gets it wrong. Sometimes she hits out at the wrong people. But Vivian and her friends’ determination, hope, doggedness and, sure, moxie, sees real change emerge. It’s funny and vital and an absolute breath of fresh air. Though the film focuses on Vivian, one of the joys of Moxie is that it’s not just Vivian who goes on a journey. Each of the main characters has an arc which explores different kinds of responses to feminism.

Here we break them down.

Vivian is inspired by her mother and by her new classmate Lucy (Alycia Pascual-Pena) to make the magazine in an attempt to address inequalities in the school. Through the mag she finds new friends, a voice and power she’d never had. Moxie calls out the boys who have been harassing Lucy. She supports Kaithlyn (Sabrina Haskett) after Principal Shelley (Marcia Gay Harden) enforces a discriminatory dress code and she backs Kiera’s (Sydney Park) campaign to win a valuable sporting scholarship. But when Kiera doesn’t win, Vivian is angry and disillusioned. She has the pure rage of a teenage girl who’s just discovered white hot fury and she spits it over everyone – including boyfriend Seth (Nico Hiraga), her mother and her mother’s new boyfriend (Clark Gregg). Vivian cares. She really fucking cares. And caring is a beautiful thing. But it causes her to make bad decisions, distributing stickers that get her and the others into trouble and stealing an award won by the Principal which ultimately leads to her best friend Claudia’s (Lauren Tsai) suspension from the school. Vivian finds her voice, her allies and her desire to fight, but mistakes are made along the way. She, like all of us, is still learning in a thorny landscape. Vivian gets it wrong but she accepts this, atones and doesn’t give up. We, the film says, must do the same.

Claudia is Vivian’s best friend who is not as comfortable with speaking out or putting her head above the parapet as Vivian. When Moxie suggests the girls come to school with hearts and stars drawn on their hands she is dismissive, suggesting it won’t do anything. She’s jealous of Vivian’s new passion and new friends and, in Vivian’s eyes at least, isn’t supporting her. It’s Claudia, though, that officially registers Moxie so the gang can put up posters in the hallways, a move which ultimately results in her suspension from school – a very grave outcome from her family’s perspective. Vivian’s lack of understanding that things are different for her because she is white and Claudia is Chinese is a lesson that Vivian learns and ultimately leads to Vivian admitting to being behind Moxie and suggesting that the suspension should be hers. It’s not clear if the decision to suspend Claudia will be reversed but the two are reunited as best friends who have grown together.

Lisa (Poehler) acknowledges that when she was young and fighting the patriarchy they also made mistakes. She says they weren’t intersectional enough, that they called their meetings ‘pow wows’ and in general were making up their forms of protest as they went along.

She and Vivian are close but somewhere along the line communication with her daughter has dropped off. Once she understands what Vivian is going through she reunites her with Claudia and shows up to support her protest. The two admit they inspire each other – it’s her mum and not Seth she goes to when she steps down from the podium – an important, powerful and perfect moment between the two, acknowledging the work of former generations of feminists at the same time as celebrating the progress the new generation is making.

Seth is a wonderful example of a feminist ally – he doesn’t get everything right but he tries constantly and when he doesn’t know how to deal with a situation he’ll ask. Seth discovers who is behind Moxie early on, accidentally. He offers to distribute in the boys bathroom, he draws hearts and stars on his hand and wears a tank top in solidarity with the girls and co-nominates Kiera for the sport scholarship. Though he and Vivian fallout – it’s Vivian’s fault – in the final rousing act of the film he allows her to apologise and shows her pitch perfect support. Finally finding her voice, Vivian stands up in front of the girls who have walked out of class in protest over the rape of a girl and admits that she is the maker of Moxie. After a moving moment where the rape victim comes forward and the women share a scream reminiscent of the group grieving bit in Midsommar, Vivian exits the stage to allow other girls to speak. Mouthing her apology across a crowd, in response Seth rolls up his sleeve to reveal word VIVIAN written large up his arm. It’s both a reference to her earlier rant about being expected to be his property and have his name on her arm, and a nod to the ‘girls on tops’ movement which saw people wearing t-shirts with the names of their favourite female filmmakers and stars.

Ike Barinholtz’s English teacher is well meaning but ineffective and is called out on it by the girls in his class. Early in the film he allows the bullying Mitch (Patrick Schwarzenegger) to talk over Lucy when she’s making a point about the limitations of the syllabus. When Principal Shelley sends home a pupil because she’s wearing a tank top and has big breasts he does nothing and when the girls protest by wearing tank tops to class he claims it’s a women’s issue. Davies doesn’t know how to handle his pupils’ burgeoning interest in feminism and so he does nothing.

Later though, when the girls are planning to stage a walkout, he offers support. Though he says it’s their funeral if they leave and he is ‘washing his hands of it’ when he holds them up they are covered with hearts and stars.

Lucy Inspires Vivian, she teaches her that hiding in the background and blending in to try to avoid confrontation isn’t the right thing to do – that Vivian should hold her head up. Lucy is brave and fierce and confident – she is Black and gay and shows a level of awareness and strength that Vivian wouldn’t have had to learn, while Lucy has. But she can also lack mindfulness of other people who aren’t as strong as her. Her nomination of Kiera is well meant but ultimately ends badly for Kiera, in part because the girls were too assured that they would be able to change the school overnight. Idealism can be wonderful but by making Kiera stand for all women and girls, she ends up hurt and humiliated as a consequence. Lucy also doesn’t really understand the seriousness of Claudia’s suspension. She will continue to fight but she, like Vivian, still has things to learn.

Shelley fails to support the female students at the school. Her refusal to act even when Lucy is the victim of abusive behaviour allows toxic acts to perpetuate, and her response of ‘sticks and stones’ to Lucy after she’s been verbally abused is the catalyst which drives Vivian to action. Shelley makes some valid points – she’s not wrong about it being important for things to be done within school rules, that girls should pull up a chair if we want a seat at the table, but her apathy leads to toxicity going unchecked. She’s an example of those with an attitude that doesn’t take feminism seriously, arguing that there are more pressing problems. Her turning a blind eye has enabled the rape we later learn has gone unreported. The final act though, offers hope for her to change – the walkout and protest means she finally has to talk Mitchell’s behavior seriously and there is hope that she will learn from her mistakes.

Moxie isn’t a polemical, it’s a fun, joyful movie which celebrates people of all ages, races and genders trying to do their best, but it’s also a smart look at different attitudes to inclusiveness and equality, to protest and change that might be about feminism in this instance but isn’t confined to that issue. Instead it’s an intelligent exploration of tolerance and how things might be better for everyone regardless of our generation if we try to listen and learn from each other.