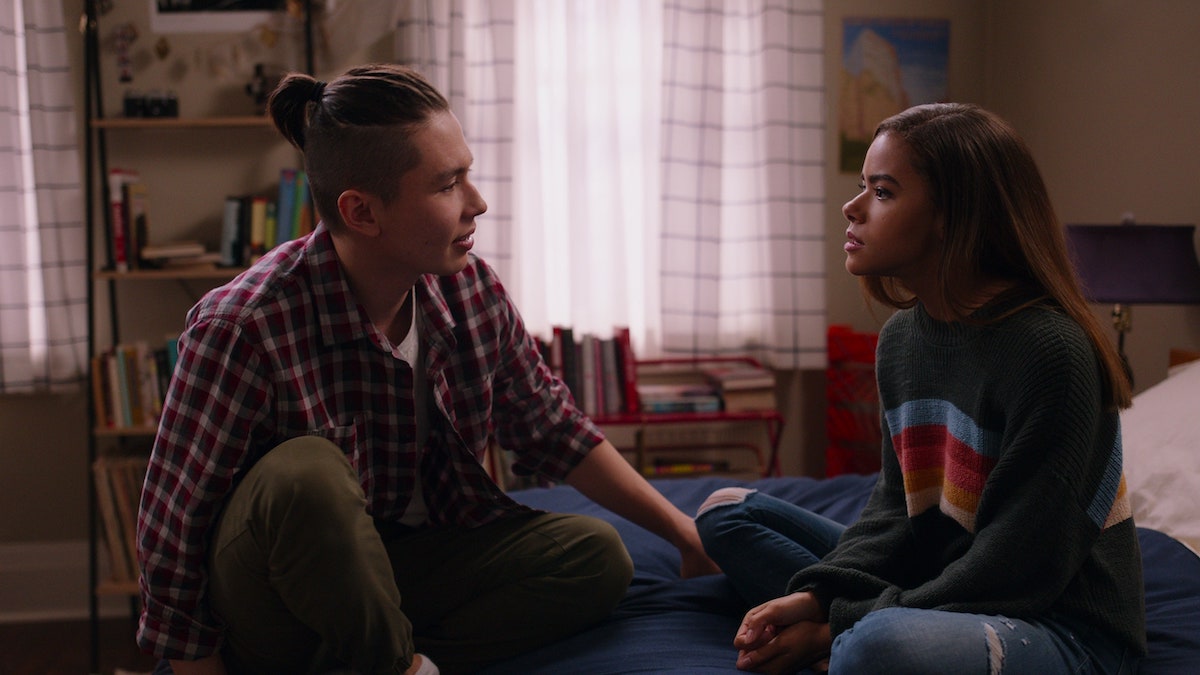 Marketed as an updated and darker version of Gilmore Girls, the idea of this new mother-daughter duo show, Ginny & Georgia, is instantly appealing. Netflix’s new top 10 show is about 15-year-old Ginny Miller, played by Antonia Gentry, who often feels more mature than her 30-year-old mother, Georgia (Brianne Howey). When the family moves from Texas to a new town called Wellsbury in Massachusetts, Ginny isn’t too keen until she meets her super cute neighbor, Marcus, and his twin sister Maxine. But life is not so simple, and as secrets come to light, things get more complicated.

After finishing the show in 24 hours, I wish I could sit here and write about how compelling it is and how well it portrays that point in teenage life where you’re impulsive, awkward, and nervous as you try to figure out relationships and find yourself. However, while the town of Wellsbury is picture-perfect, Ginny & Georgia is not as it is undermined by a significant race problem, primarily how it deals with its biracial lead.

The show’s failure to deal with its lead character Ginny’s biracial identity makes it hard for me to love all the other great aspects of the show, as much as I want to. Ginny & Georgia’s exploration of coming of age, self-harm, LGBTQ+ relationships, sexual abuse, and being an American Sign Language family is compelling and something I wish was more present on television. Even criminal mastermind Georgia Miller, whose life is full of secrets, murder, and lord knows whatever else, is undermined by the shows tendency to only acknowledge Ginny’s Blackness when dealing with racism. Her race isn’t considered in any other regard, which suggests being Black is nothing more than microaggressions and discrimination, and that racism makes up the entirety of the Black identity.

“If you had an ass, you’d be perfect”

Ginny’s experience of racism, mostly in the form of microaggressions, is plain for the eye to see, particularly in the comments made by Ginny’s new friends. When her friend Samantha (Romi Shraiter) asks her, “What are you?” and then plays it off as a compliment because Ginny is so “exotic looking,” Ginny’s response is silence. An equal response is given when the same friend fetishizes mixed-race babies by saying, “I’m going to marry a Black man so I can have adorable little mixed babies.” Beyond the fact that this comment is weird, and that the show is in many ways portraying a main character who is struggling with their biracial identity, the show normalizes racist comments by not having Ginny call out her friend.

It’s the same situation when Ginny straightens her hair, and Brodie, one of those characters who thinks they’re the funniest person alive but actually just fulfils that stereotypical teen drama douchebag role says, “If you had an ass, you’d be perfect. It’s weird that you don’t.” The use of comments like these in the show aid stereotypes and fetishizations of Black women as objects of desire and the idea that Black women, like me, who don’t have large bums are somehow less Black.

The show attempts to deal with this issue by having Ginny discuss it with her boyfriend Hunter (Mason Temple). Though it is a lovely scene because they start to discuss their experiences of being biracial, it does not address the fact Brodie has just used a racist insult, which is a common occurrence among Ginny’s friends.

Both of these sequences undermine Ginny’s character, who, when we first meet her, is outspoken and strong as she calls out her English teacher for constructing a syllabus containing mostly white men. The show weakens its lead character when it portrays Ginny as someone who can’t have hard conversations with her friends.

A particularly striking aspect of the show is Ginny’s interactions with her AP English teacher, Mr. Gitten (Jonathan Potts). Her interactions with him are reflective of a situation most Black people have either experienced or heard about during their education, and yet the way the show handles it is somewhat messy. In Gitten’s first encounter with Ginny, he assumes she is not as well-read as the rest of her (predominantly white) classmates. This is continued when he states Ginny lost the writing competition because her essay was “too unconventional” when he really means it was too Black for him. Never directly discussing the issue Mr. Gitten has with her until the last episode, the moment is the closest Ginny comes throughout the whole show to dealing with the racism she receives, and yet it is one of the most unrealistic portrayals I have witnessed on television.

Instead of trying to get the teacher punished, Ginny’s approach to dealing with the racism she receives is to blackmail him, saying she’d out him as a racist if he doesn’t give her a glowing college recommendation letter. I can only speak on my experiences as a Black woman who’s faced similar situations, but Ginny’s approach is naïve and an impractical reflection of what racism in school is like for minority ethnicities. The solution to racism is not blackmail. By Ginny choosing to blackmail him instead of telling the school so he can get fired or just have another teacher to write the recommendation letter, it makes her less honorable.

Also, many of the comments Gitten makes are in front of the class and something he’s been doing for years as Bracia tells Ginny she’s had similar experiences with him. So surely he really wouldn’t have felt that threatened? All in all, Ginny’s approach to dealing with Mr. Gitten’s treatment is shocking and unhelpful as it suggests this is a useful way racism is dealt with.

“Your bars could use a little work, homie”

The show’s failure to fittingly deal with its biracial lead’s struggles weakens the rest of the show, as it opens the door to messy scenes such as the heavily criticized “Oppression Olympics” scene where Ginny and Hunter throw stereotypes at each other, while Hunter fails to see how Gittens’ treatment of Ginny is racist. While the scene can be criticized for many things, it does well to highlight how all people of color can experience racism, but their experiences are not the same. While Hunter’s experiences are 100% valid, they are not comparable to what Ginny is going through in relation to their English teacher. Hunter’s accusations that Ginny is “causing drama in class” is him painting her in the stereotypical angry Black woman image because she’s calling out discrimination and using her voice.

The dialogue the argument uses is embarrassing, to say the least, with Ginny saying to Hunter, “Your favourite food is cheeseburgers, and I know more Mandarin than you do, you’re barely even Asian,” while Hunter says, “But I’ve never seen you pound back jerk chicken. The last time I checked, Brodie twerks better than you. And I liked your poem, but your bars could use a little more work, homie. So really, how black are you then?” The entire argument, which consists of stereotypes to prove who’s whiter, is extremely chaotic as it perpetuates this idea that you’re somehow less Black if you don’t know how to twerk or “pound back jerk chicken” whatever that means. And beyond the awful dialogue, the worst bit about it is the situation, which happens in episode 8, is never resolved. It is as if the writers of the show were saying racial identity is something two biracial characters “should” be struggling with, and instead of showing how they do, we’ll just throw this scene in and have them throw derogatory stereotypes at each other. The writing in the scene undermines what could have been a powerful moment which explored both Ginny’s struggle with her identity and the racism she’s experienced since she arrived in Wellsbury. Instead, we’re left with a frustrating scene that only reinforces the show’s inability to deal with a biracial lead character.

While Ginny & Georgia is a delightfully chaotic show that for the majority of it will have you hooked and on the edge of your seat, its inability to deal with the lead character’s identity seriously undermines it. By not dealing with the microaggressions and discrimination Ginny receives, the show normalizes racism. If there is a season two, I hope the show gets a better handle on Ginny’s identity and what it means to be biracial.

Ginny & Georgia is available to stream on Netflix now.

Jujutsu Kaisen: Season 2, the Prequel Movie, and Their Possible Connections
Link Tank: How Fans Can Help Save Mystery Science Theater 3000
Line of Duty Timeline: Can This Help To Solve the Jo Davidson DNA Mystery?
Link Tank: The Actors With the Most Oscar Nominations of All Time
How Saving Private Ryan Influenced Medal of Honor and Changed Gaming