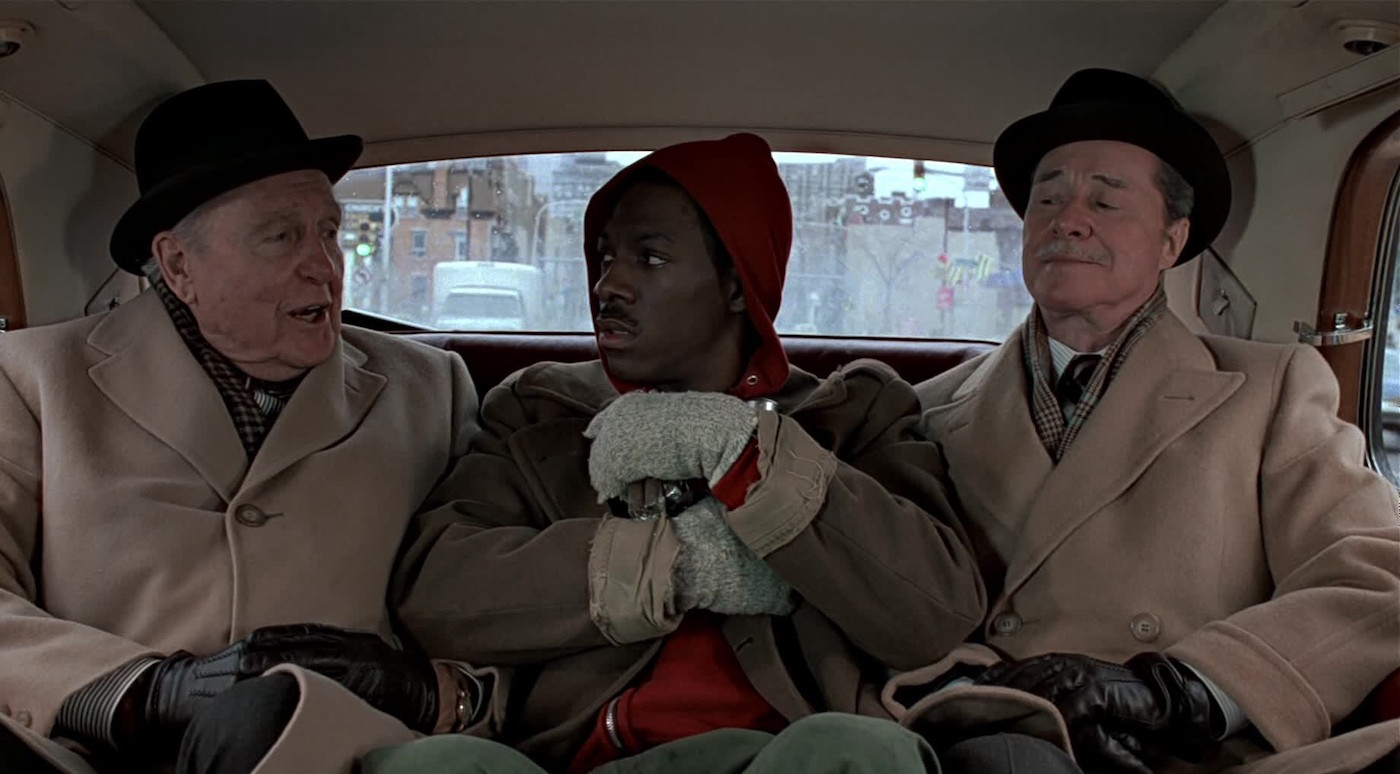 When one thinks about 1988’s Coming to America, a few things stand out: James Earl Jones and Madge Sinclair as the King and Queen of Zamunda speaking to their son Prince Akeem (Eddie Murphy) at a breakfast table with intercom radios; the opulence of Zamunda’s palace, which represented an idealized African nation to 1980s audiences the way Wakanda does today; and of course Murphy and Arsenio Hall’s Semmi fresh off the plane in Queens, New York with no idea what “common” means—or also Murphy and Hall under pounds of makeup as the argumentative old-timers at the nearby barbershop.

The film has many great elements that make it a comedy classic. However, what’s often overlooked is that the picture is not-so-secretly part of a shared cinematic universe. Indeed, Coming to America is the film which confirmed several of director John Landis’ films all occur in the same world: One with another Eddie Murphy as Billy Ray Valentine, a small time hustler who gets one over on some rich old racists and winds up nouveau riche in Trading Places, and one with carnivorous lunar activities in An American Werewolf in London. Weird, right?

The more overt and official of these is the callback to Murphy and Landis’ previous collaboration, Trading Places (1983). In that film, Murphy’s Billy Ray Valentine is an unimpressive grifter who’s trying to get by on a put-on about being a Vietnam vet without legs. Obviously Billy Ray has never had the opportunity to achieve more, and two corrupt blue bloods named Randolph and Mortimer Duke (Ralph Bellamy and Don Ameche) think it would be funny to give Billy Ray that chance to succeed—if only temporarily, after all they don’t want a Black man actually flourishing at their company—while throwing their silver spoon lackey, Louis Winthorpe III (Dan Aykroyd) into poverty.

It’s a cynical racist game they’re playing, and it ends up blowing up in their faces, with Billy Ray and Louis eventually joining forces to get rich while bankrupting the Dukes. In other words, it’s a perfectly ‘80s comedy in tune with that decade’s values: humor based in a lot of stereotypes that ends with the good guys getting rich. Still, it’s a charmer which, alongside 48 Hrs. (1982), proved Murphy was a bona fide movie star outside of Saturday Night Live. Hence why Murphy and Landis are so keen to call back to it in Coming to America.

Late in the 1988 comedy about Prince Akeem traveling to New York City in order to meet a nice American girl, the prince and Lisa (Shari Headley) are taking a walk in the promenade near the Brooklyn Bridge when Akeem gives a handful of rolled up hundred dollar bills to two homeless men. Committed to embracing a life of poverty, Akeem tells Lisa he just gave away pocket change. However, when the camera returns to the two old-timers beneath blankets and cardboard, we learn that (gasp) it’s Ralph Bellamy and Don Ameche! It seems Billy Ray and Louis really did thoroughly put these capitalist vultures out on the street. But the two grumpy old men are thrilled with this newfound investment.

“Mortimer, we’re back!” Bellamy announces with a Cheshire grin. The two then show up again to bang on Akeem and Lisa’s window as they have dinner, shouting, “Let’s have lunch.”

It’s an amusing and impossible-to-miss Easter egg for fans of Murphy’s films. Although given how rotten the Duke brothers are, we fear Akeem has done more harm than good. The moment also makes the two films a rare thing in 20th century Hollywood cinema: a shared cinematic universe. While the Universal Movie Monsters did this 40 years prior to Trading Places, we were still a long way from Quentin Tarantino and Kevin Smith’s independent world-building in their 1990s films, never mind the Marvel Cinematic Universe popularizing the idea a decade after that.

However, what many miss is that Trading Places isn’t the only Landis movie that Coming to America also calls back to. Later in the 1988 movie, Akeem is chasing Lisa, and the two run through an appropriately scuzzy New York City subway. There are real posters from that time period on the walls, such as one for August Wilson’s Broadway play Fences, which starred James Earl Jones and Frankie Faison (both players in Coming to America). But there’s also a poster for See You Next Wednesday.

This fictional title does not correspond with a real movie, however it does match a running joke throughout Landis’ filmography, including most famously in The Blues Brothers (1980) and An American Werewolf in London (1981). Consider a nondescript billboard for a movie called See You Next Wednesday also appears in The Blues Brothers, with Aykroyd and John Belushi driving right past it in Chicago while on a mission from God. In American Werewolf, meanwhile, there are posters scattered throughout the London tube system for a movie of sorts also titled See You Next Wednesday.

The title is a play on the dirty turn of phrase “See You Next Tuesday,” and actually originates from a line of dialogue spoken in Stanley Kubrick’s 2001: A Space Odyssey. Landis, however, enjoys sprinkling it throughout his work, suggesting it’s the name of a fictional movie, one with a significant underground advertising budget between Werewolf and Coming to America.

Admittedly, this is not an official connection between Coming to America and An American Werewolf in London, or The Blues Brothers. For starters, it legally has to be slightly different since Werewolf and Brothers are Universal Pictures releases while Coming to America (like Trading Places) was produced by Paramount. Additionally, the See You Next Wednesday poster in Coming to America is not for a porno film, but a glossy sci-fi cheesefest apparently starring Jamie Lee Curtis, who also happened to appear in Trading Places. But we suspect these superficial differences in the posters (that you have to squint to notice) are concessions to the legal need to differentiate the running joke.

Like the fan theory that Ridley Scott’s Alien and Blade Runner occur in the same universe—a theory Scott himself has publicly supported—despite the sci-fi films being produced by different studios, Landis seems to invite folks to imagine Coming to America and a number of his other films are also part of the same universe.

It’s a funny thing to imagine that there are two Eddie Murphys out there, one yachting with Aykroyd’s Louis and Curtis’ Ophelia around the world, and the other a kind hearted if overly naïve African prince. And while Zamunda is a kind of paradise (at least for the men in its highly patriarchal society), demons and cursed devils like David Kessler prowl the moors of England, picking off American tourists too dim to beware the moon and stick to the road.

Of course these are more winks and nods than concrete world-building, and they’re masterminded by one of the most controversial directors of their era. In fact, it is hard to consider these connections and not also recall the director’s complicated past. For a short time, Landis was on top of the world when he made Animal House, The Blues Brothers, and An American Werewolf in London back-to-back-to-back. But by the time of Coming to America’s release, fewer and fewer colleagues were working with him due to the tragic and entirely avoidable disaster on the Twilight Zone: The Movie set, an accident which led to the deaths of three people, two of them children. Murphy, however, was one person who continued to work with Landis.

And the two worked exceptionally well together, indeed. Landis’ specific brand of outlandish, sometimes fratty humor complemented Murphy’s big swings as a performer, including beginning to experiment with makeup comedy. He never more adeptly used prosthetics than in Coming to America; and much of this film’s iconography comes from Landis and his wife, costume designer Deborah Nadoolman, who imagined Akeem and Semmi’s now iconic Zamunda winter wear.

Whatever else, Landis helmed some of the most popular comedies of the 1980s, with four of them apparently existing in the same universe. Remembering that these days can still crack a smile. Or at least a howl.