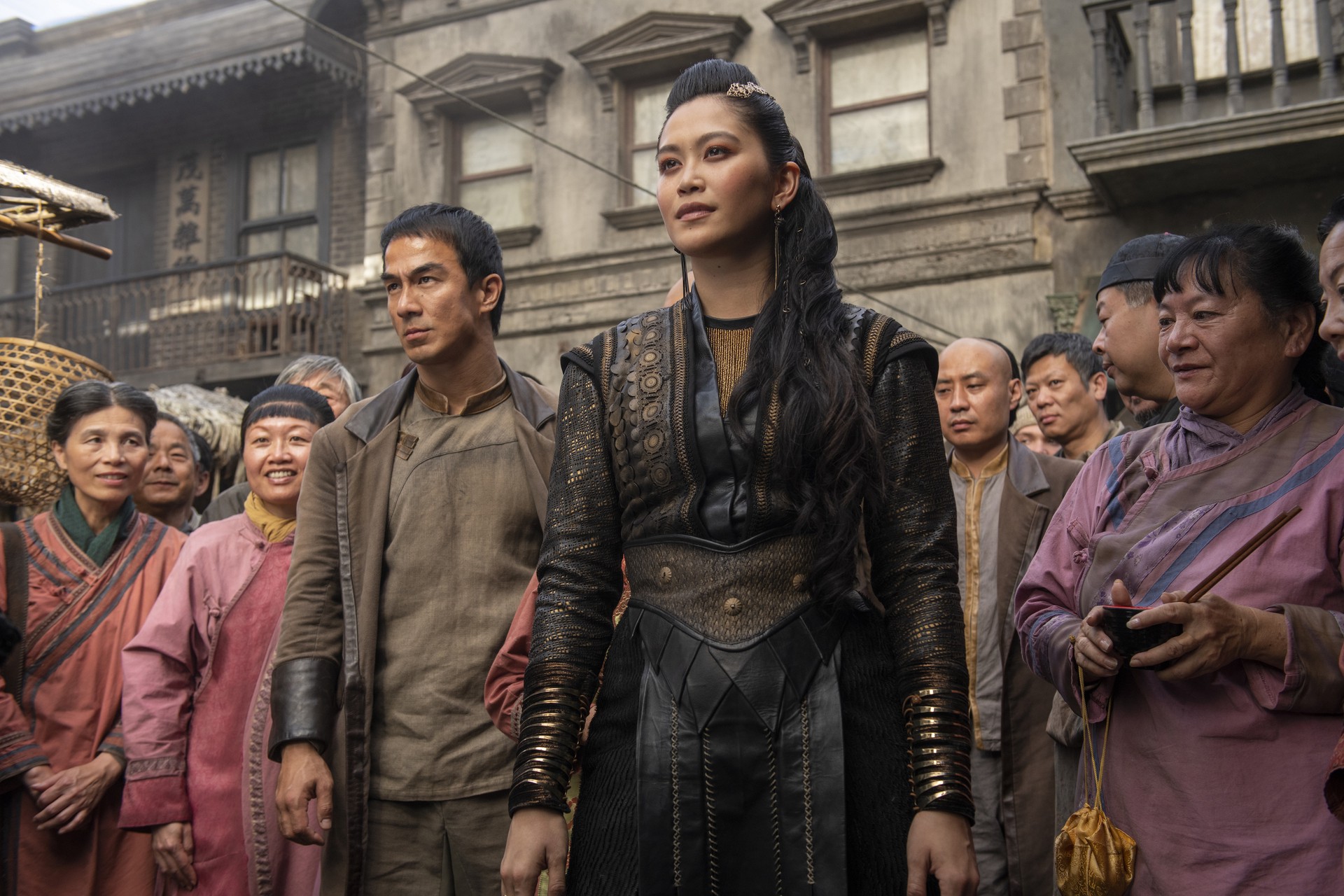 Enter the Dragon was Bruce Lee’s most significant film and is regarded as one of the greatest martial arts films of all time. It was the first major Hollywood and Hong Kong co-production, and it also became one of the most profitable films of all time. Tragically, Lee didn’t live to see its success. He died a month prior to the premiere of Enter the Dragon. For Warrior to evoke Lee’s masterpiece, this episode better be good.

The significance of the title isn’t lost on Warrior’s head writer Jonathan Tropper. “My favorite movie to watch is probably Enter the Dragon,” claims Tropper, “just because I feel that is when production values caught up with what [Lee] was doing. Some of the production value on the earlier movies, certainly the versions that I’ve been able to see, are a little bit sketchy and Enter the Dragon felt like it was the moment in time where his choreography and what he was doing actually was supported by the production values. And he obviously had a lot of creative control over that movie.”

Thankfully, this episode doesn’t disappoint. It delivers the culmination of so many story arcs from Season 2 in the biggest blow out fight scene that Warrior has attempted so far, a sanguineous depiction of one of California’s darkest moments in history, the San Francisco Riot of 1877.

The cold open backtracks the ending of the previous episode where Jacob (Kenneth Fok) relives killing the Mayor to save Penny (Joanna Vanderham). They both realize that even though he was defending her, a Chinaman who killed the mayor will be sentenced to death, so Penny gives him money and tells him to run for the train to San Jose. But Jacob stops to visits his ailing mother first. She’s bedridden in a Chinatown flop house. He gives her some medicine and most of the money Penny gave him, telling her that he’ll be away for a few days. But when he goes back out on the streets, the delay was costly. The cops are looking for him, so he hides out in a filthy storage basement with rats, eating scraps and drinking rainwater. When the cops inevitably head towards his hideaway, he escapes to Chao’s (Hoon Lee) place which is where we left him at the end of last episode.

Chao is conflicted. At first, he refuses to help Jacob, thinking it’s too big. But then he changes his mind after Chao flashes his remaining wad of cash. Then he gives Jacob his money back and tells him to hide in a coffin being shipped back to China. The plan seems feasible, but O’Hara (Kieran Bew) finds him right away. But Lee (Tom Weston-Jones) is suspicious of O’Hara’s bust. After he deducted that O’Hara set up Zing (Dustin Nguyen), their trust is broken. O’Hara claims Buckley (Langley Kirkwood) tipped him off, but later Mei Ling (Dianne Doan) tells Chao that he did the right thing turning over Jacob. Chao feels conflicted again because he betrayed his word and says he took money from Jacob.

While transporting Jacob in their paddy wagon, the SFPD cross into an Irish neighborhood. Tully (Patrick Buchanan) riles up the Irishmen and a mob gathers in the street. They beat down the cops and break into the paddy wagon. It’s right in front of the Banshee where Sophie (Celine Buckens) wakes up, having sought refuge after the Mayor’s death with Leary (Dean Jagger). They hear the commotion outside and Leary rushes to save O’Hara from the mob. Jacob is lynched. Sophie tries to stop it but is also beaten. Leary rescues her from the mob and takes her back in the Banshee. “There will be more men dead before the day is done,” say Leary, “This is a goddamn reckonin.’’ Leary casts Sophie out, telling her she was nothing more than a tourist there.

The lynching stokes their blood lust so the Irish march on Chinatown and all hell breaks loose. It gets bloody and brutal quickly – a full out gang war. Ah Sahm (Andrew Koji) and Young Jun (Jason Tobin) stare in horror at the violence. They send Hong (Chen Tang) to rally the Hop Wei. The Long Zii comes to their side, unifying both tongs against the Irish raid. Hong welcomes Li Yong (Joe Taslim) with a ‘hey” and a friendly nod. The four gangsters charge into battle and the choreography is ruthless. Soon everyone is splattered with blood or dead.

After losing Jacob, Lee followed the crowd with O’Hara and the rest of the paddy wagon police escort trailing grudgingly behind him. Lee finds Tully and after a rough fight, he shoots him multiple times, even after he’s dead. Chao flees with Mai Ling to hide in Ah Toy’s (Olivia Cheng) brothel.

They find Ah Toy with one huge bodyguard. She’s seriously wounded from last episode. Mei Ling stitches up Ah Toy, telling her that she learned how when she was married to a warlord back in China. “From a warlord’s wife to a warlord herself,” says Ah Toy, “Why are you helping me?” The rivals have a heart to heart and find some common ground in their journeys. “We both do terrible things,” says Ah Toy, “All because neither of us is ever going to go back to what we were.” Such is the plight of immigrants. They face incalculable hardships because the life they left behind was even worse.

Then it happens. Finally, we have nunchucks. A Chinese man tries to repel a huge rioter with some nunchucks but the rioter gets them. But then Ah Sahm gets hold of them and the ensuing martial mayhem is lit. After dispatching several rioters, Ah Sahm turns to the original nunchuck wielder and asks, “Can I borrow these?”

In the following melee, Koji’s martial skill really shines. He delivers some of his best fight sequences so far with generous nods to Bruce Lee’s signature nunchaku displays while expressing his own flair with the flails. It’s an extremely satisfying moment, something Warrior fans have been waiting for since the show began.

Meanwhile, Chao defends the brothel against rioters in some bloody knife and stick fights. This episode has the highest body count yet. Young Jun fights viciously in amidst some sheets hanging to dry that conveniently catch dramatic blood splatter. After dispatching numerous rioters, he gets pinned down at gun point. But just as the trigger is about to be pulled, the gunman gets a hatchet to the head from Father Jun (Perry Yung). Father and son fight side by side, and Young Jun watches admiringly as his dad mercilessly dispatches more rioters.

Meanwhile, back at the mayoral manor, Sophie comes home to Penny to tell her Jacob is dead. “The entire world’s gone mad” says Sophie. “No. This is the world,” replies Penny. The police reinforcements finally arrive in Chinatown to quell the rioters. The Banshee is filled with wounded. Leary is one of the only characters who was not involved in the riot and remains unscathed. Everyone else is covered in bruises and blood. Ah Sahm, Young Jun and Hong come to collect Jacob’s body. O’Hara stops them with his shotgun at first, and then allows them to cut Jacob down.

As Ah Sahm carries Jacob’s body away in slow motion, he and Leary lock eyes staring each other down for an inevitable showdown. Will their confrontation be next week’s Season finale?

What a Walking Dead Negan Spinoff Could Look Like
AWAKEN Official 4K Trailer | DUST Feature Film
Minecraft 1.17: What the Caves and Cliffs Update Changes Mean for the Game
Van Helsing Returns For A Final Season And Adds Time Travel To Its Narrative Palette
10 Best Star Wars Planets in the Galaxy